When I was little, I always looked forward to the Jewish holidays.  Hannukah meant big platters of golden, crispy fried latkes (potato pancakes), and I even looked forward to Passover (the holiday where you can’t eat leavened bread.) Sure, the cake didn’t taste the same without flour, but there was always more food to compensate.  I’ve learned to associate the Jewish holidays with food, and so naturally I’m always looking forward to the next pre-ordained festival.

However, Purim is one of the holidays that sometimes slips quietly under the radar.  For those of you who don’t know, Purim is based on the story of Esther, a Jewish woman who keeps her faith a secret from her husband, King Ahasuerus of Persia.  The King’s advisor, Haman, develops a plan to wipe out the Jewish minority, and obtains the King’s permission to carry out his evil plot.

Esther decides to reveal her true identity to the King, and tells him Haman’s plan to kill all the Jews in Persia- including herself.  The King is moved by her testimony, and sentences Haman to death.

I’m leaving out some of the gory details, but I’m sure you get the picture.  If you don’t, click here for a helpful link.

When I told the traditional Purim story to some of my non-Jewish friends, they cited the Book of Esther from the Bible…So there’s another point of reference.

Nowadays, Purim is celebrated like one, giant carnival.  At least, that’s how it was when I was growing up.  We would have a Purim carnival at my local congregation, complete with costumes, a parade, games, singing, dancing, and of course, lots of food.  I have vague memories of cotton candy, hot dogs, and itchy tulle…But these things aren’t stereotypically Purim.

Hamantaschen are popular cookies that get their namesake from Haman (as you may have guessed by their name).  When I was little, they told us that the cookies were shaped like triangles to look like Haman’s hat.  Recently, though, I discovered that they’re actually supposed to be his ears. 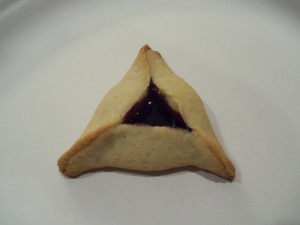 I’m glad that my four-year-old ears were saved from this interpretation.

The cookies are traditionally filled with preservatives, jellies, or poppyseeds.  I have always preferred the ones with jam or jelly, so that’s what I decide to make this year.

If you want to get creative, you can also fill the cookies with chocolate chips and spreads like Nutella.  But for Hamantaschen beginners, I’d stick to fruit-based fillings.

Finding a good recipe for the dough can be like finding a needle in a haystack.  There are lots of recipes on the internet, and I chose mine based on: a.) It’s relatively short list of ingredients and b.) The amount of time you had to chill the dough.  Some recipes called for things like cream cheese and overnight chill times, both of which I wanted to avoid (although in retrospect, the cream cheese could have been a good addition.)

I also wanted to find a recipe that made the Hamantaschen more cakey, and less crisp…However, this proved next to impossible.  Mine turned out fine, but were more on the crispy side.

Also, a word to the wise…Make sure you fold the triangles correctly.  I didn’t pinch the corners on mine enough, and some came apart in the oven.  Picture hot, bubbling jelly strewn across a baking sheet…Yeah.  Not so good. Click here for a good tutorial.

Overall, the cookies turned out well, and tasted delicious. I also substituted Apple Juice for Orange Juice in the dough recipe, which gave the dough a sweeter taste. 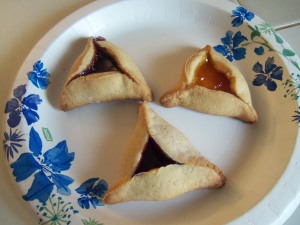 You can enjoy the cookies anytime, or once a year around the beginning of March.  And even though legend says they’re supposed to be “Haman’s Ears,” I give you full permission to ignore that side-note.

1. Beat the butter in the bowl of a heavy-duty mixer with the paddle attachment on medium high speed until the butter is smooth, about 1 minute. Add the sugar in two additions and beat, occasionally scraping down the sides of the bowl. Beat until light in color and texture, about 2 minutes. Gradually add the eggs and vanilla. Combine the flour, baking powder, and salt in a mixing bowl. Reduce the mixer speed to low and add the flour mixture to the mixer in two additions, alternating with the apple juice. Mix just until the dough clumps together and the sides of the bowl are almost clean.
2. Gather up the dough and transfer to a lightly floured work surface. Knead a few times until smooth. Divide the dough in half  and shape each portion into a 1 inch thick rectangle and wrap in plastic wrap. Refrigerate for 30 minutes. (The dough can be refrigerated up to 1 day, but it will be very hard, and should stand at room temperature for about 30 minutes before rolling out. The dough can also be frozen, double wrapped in plastic, for up to 2 weeks. Defrost in the refrigerator overnight. You can make both, or you can save one for another time.
3. Position racks in the center and top third of the oven and preheat to 350º F.  Line three to four cookies sheets with parchment paper or silpat baking mats.
4.  Remove the dough from the refrigerator. Lightly flour the work surface. Unwrap the dough and rap the edges on the work surface (to help avoid cracking during rolling). Place the dough on the work surface and sprinkle the top with flour. Using a rolling pin, roll out the dough into a 1/8-inch thick rectangle. Using a 3 3/4 inch-diameter cookie cutter (or, you can do what I did and use the rim of a water glass), cut out the circles and place them on the prepared sheet.
5. Place about one teaspoon of filling* in the center of each circle. Fold the dough into triangles  (see photos) and place on a the prepared cookie sheets. Pinch the corners  firmly to prevent the cookies from falling apart in the oven.  Bake until golden brown about 25-30 minutes. Cool on the tray.

*Make sure the filling you use is chilled before you place it on the circles, as it will start spreading once it comes to room temperature.

Hi! My name is Emily and I'm a writer based in St. Louis. If I was stranded on an island and could request three items of food, they would be pain au chocolat, enchiladas, and Neapolitan pizza.
View all posts by Emily Wasserman →
This entry was posted in Cookies, Dessert, Uncategorized and tagged baking, cookie, cookies, cookies with filling, dough, ears, filling, hamantaschen, holiday, jam, jelly, jewish, jewish cooking, jewish holiday, purim, roll out, sugar, sugar cookie, traditional, triangle. Bookmark the permalink.