Fly Fishing on the Meramec

A scientist at my work likes to go fly fishing on the weekends. He’s been going since he was a little boy growing up in Pennsylvania. The other day, he asked me to come. I agreed because I’ve always wanted that experience.

“I’m not sure you’re going to like it,” he said. He seemed really nervous that I wouldn’t.

As it turned out, I liked it a lot. I didn’t love every minute but for the most part I had a good time. Starting with the adrenaline rush of climbing down a cliff to get to the river and ending with a long walk downstream, it was unlike anything I’ve ever experienced before.

I’ve gone fishing a couple times before but it was always at the side of a lake or pond. I’d never hiked upstream in a river or waded into deep water with clothes on until Sunday. We went to a stretch of the Meramec River that’s about two hours south of St. Louis. Aside from the occasional kayaker and fisherman, the river is mostly deserted. 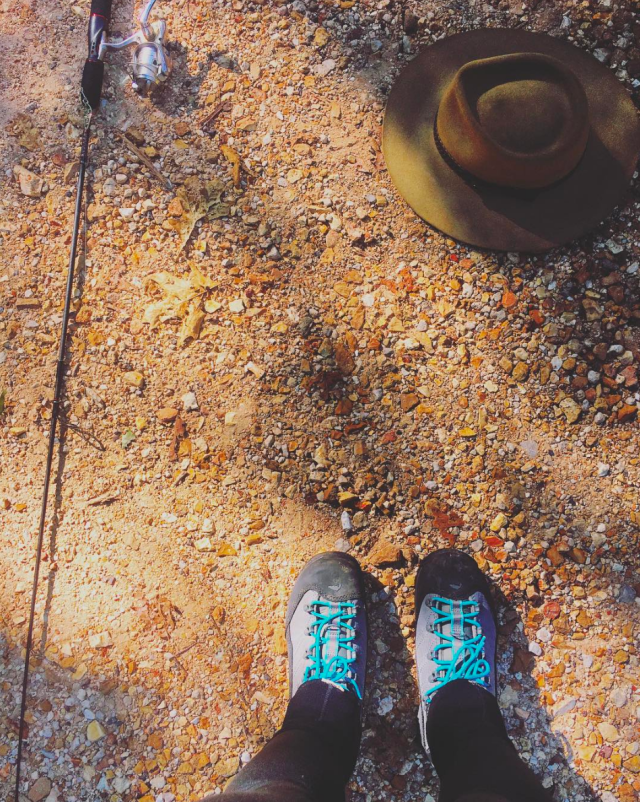 The scientist loaned me some gear so I had water shoes, water socks, a hat, and sunglasses. I brought everything else. I made sure to wear water-resistant leggings and a t-shirt, which ended up serving me well later.

But I’m getting ahead of myself. When we got close to the river, the scientist told me there were two entry points: “Cardiac” and “Suicide.” I guess I looked scared because he started laughing and explained that the passes to the water were challenging but not undoable. I like to hike so I figured I would be okay.

He decided to lead us down “Suicide” to the river because the path was shorter. But, as I soon found out, the pass was much steeper than Cardiac. I was wearing huge fishing shoes that were a little too big and so I had trouble finding my footing. I had visions of myself tumbling down the cliff face-first, but I tried to put those out of my head as we hiked down. A couple times, I just started crawling on my back because it seemed safer than attempting to walk.

When we got to the bottom, we hiked a little ways out around a marsh. The first glimpse of the river was breathtaking. Even through my sunglasses I could see the water shimmering green and blue. There were trees everywhere and bright orange clay cliffs. The scientist explained that when it floods, the water rises to about the level of the cliffs.

We walked a little upstream and then paused so he could show me what to do. At first, I kept my hand way too tight and so I was having trouble casting the line. A key part of fishing is relaxing, because your line won’t go very far if your wrist is stiff. Ideally, it should be one fluid motion.

I didn’t accomplish that but I managed to relax so I could cast better. Another key to good fly fishing is turning off your brain the second you cast the line. If I overthought it, the line wouldn’t go as far. I tried to just let my body do the work and leave thinking out of it.

I kept thinking that I caught a fish but it ended up being sticks or mud. “You’ll know when you’ve caught a fish,” the scientist said. “He’ll put up a fight.”

I kept casting and reeling, but nothing happened. I announced that I wanted to catch a fish first, but that seemed unlikely. I was there with someone who’s been fishing for more than thirty years. I DEFINITELY didn’t have the upper hand.

Suddenly, I felt a tug at the line. I looked out a few feet in front of me and a fish had latched onto the hook. “I caught one!” I screamed. I started to reel it in and the scientist came over to help me. We got it out of the water and inspected it. It was a small fish, not big enough to keep, but I still felt triumphant. 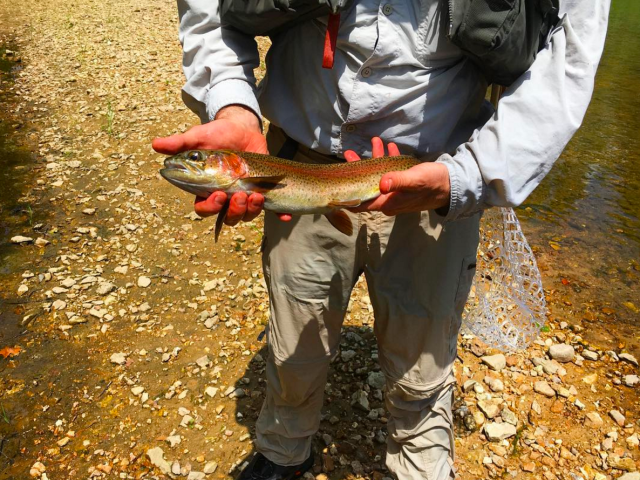 After that, I didn’t catch anymore fish but the scientist did. I helped him reel in some big rainbow trout. He likes to smoke the fish which is good, because I love eating it. But as we let the fish dry out on the shore and put them in a bag, I felt kind of guilty. I’m not a vegetarian and I don’t usually feel too bad when I eat meat, but there was something weird about seeing the fish I was going to eat later.

On the other hand, I thought it would be rad to eat the fish right then and there. I’ve always been kind of jealous of people in movies who camp and cook fish over a fire. It seems like it would be delicious, and I definitely want to try that someday.

I also started thinking a lot about self-sufficiency, or living off the land. It’s something that I want to do more of. I imagined foraging for plants and berries, eating fresh fish, and not relying as much on other people to do that for me. The old adage, “you give a man a fish and you feed him for a day; you teach a man to fish and you feed him for life,” seemed more true than ever.

I’m not anywhere close to being able to live off the land, partly because I don’t know enough about it and partly because the lifestyle that I lead doesn’t fit into this model. But it’s something to consider. The more we can rely on ourselves for food, the better. 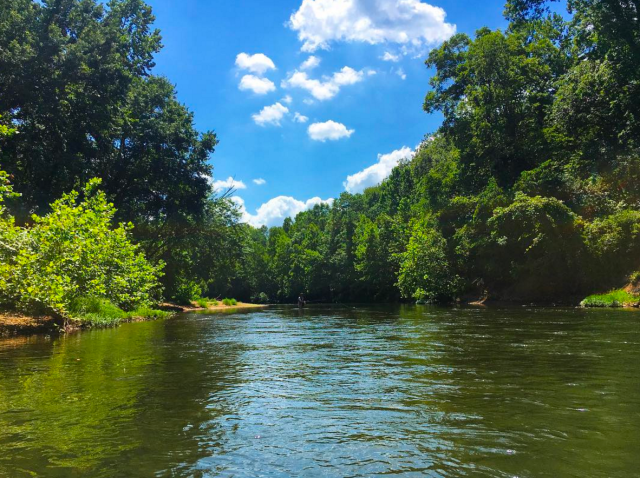 After we caught a few more fish we turned around and started walking downstream. The scientist said this would be easier than walking upstream but weirdly, I found this to be false. When you go downstream, you’re moving with the current so you should be able to just move along without much resistance. But because it was easier, I stopped taking deliberate steps. I also rushed a little because I was getting tired and wanted to get to the shore. I ended up face-planting into the water about a mile away from where we were stopping. It’s okay, though, because I was hot and the water felt good.

“I fell but it doesn’t matter. Like you said, it feels good,” I told the scientist when I caught up to him.

“I never said that,” he said. I argued with him a little because I could have sworn that he said that, but in the end, I gave up. Maybe I invented it to sooth myself but it’s still true.

ANYWAY. Overall it was a very successful day. I learned how to fish and, according to the scientist, I did well. I only started to give up at the end after eight hours of walking through a river. Even then, I was happy to be in the water, surrounded by lush forests and colorful rocks, and with a beautiful blue sky overhead. “When have you ever gotten the opportunity to do something like this?” I thought to myself. The answer is, never.

Now that I’ve experienced fly fishing I definitely want to try it again soon. It might take a while before I’m a natural and catch as many fish as the scientist, but eventually it will happen. Until then, I’ll enjoy the journey.

Here’s a song that reminds me of fly fishing. It’s good for turn-off-your-brain-and-just-feel-it moments, i.e., my favorite ones.

Hi! My name is Emily and I'm a writer based in St. Louis. If I was stranded on an island and could request three items of food, they would be pain au chocolat, enchiladas, and Neapolitan pizza.
View all posts by Emily Wasserman →
This entry was posted in Traveling, Uncategorized and tagged environment, fishing, fly fishing, hiking, Meramec River, Missouri, nature, outdoors, rainbow trout, river, smoked fish, smoked trout, Southern Missouri, trout. Bookmark the permalink.