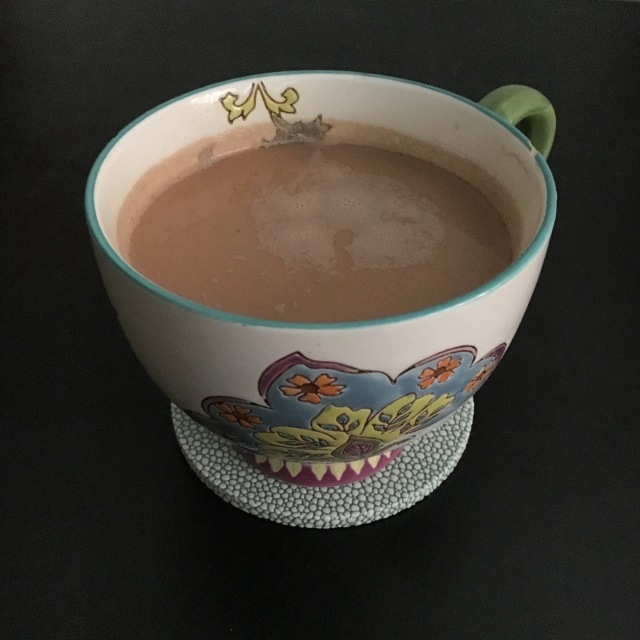 Making chai from scratch has been on my bucket list forever. I kept resisting for a bunch of reasons, the main one being that I thought the process would be waaayy too involved. I don’t own a teapot (yet) or a big tea strainer. I got caught up in the details.

Lesson learned: Never get caught up in the details. Yes, making this chai isn’t as easy as putting a tea bag in a cup and pouring hot water over it. It takes about 30 minutes to make, start to finish. But let me tell you, it is SO worth it. And you don’t even need fancy kitchen tools to do it.

First, make sure that you have all your ingredients–some of these aren’t easy to find. I bought the cardamom pods and cinnamon sticks at the spice shop at D.C.’s Union Market today with my friend Carly. I also found the loose leaf black tea at the market. The tea lady let me smell a bunch of varieties and when I smelled the Ceylon, I almost passed out. It’s other-worldly.

Even though the ingredients are exotic, the tea making process really is not. You start by putting the grated ginger and cinnamon in a pot with boiling water. Once that’s simmered for a while, you add the cardamom pods and tea. A few minutes later, pour the milk and maple syrup into the same pot.

The cardamom pods and cinnamon need to be “lightly crushed,” according to the recipe. This sounds terrifying, but never fear: the process is simple. If you don’t have a mortar and pestle, just use the flat side of a knife and press down on them, the same way you would do with garlic to crush it.

The other great part about this recipe is that you can use any kind of fine mesh strainer in the last step. Pour the tea mixture from the saucepan through the mesh into a bowl, a teapot or a pitcher, if you have one.

This tea is unreal. It tastes exactly like the kind my good friend in grad school from New Delhi used to make. And the smell of the tea once the cinnamon, cardamom and ginger all simmer together…I’m tearing up just thinking about it.

ANYWAY. I would highly encourage you to make this tea as soon as possible. Don’t let the legwork intimidate you! The reward is far worth the effort.

Here’s a good tea-drinking track. I’ve been listening to a lot of Dolly Parton this week.

Bring ginger, cinnamon, and 3½ cups water to a boil in a medium saucepan over medium-high heat. Lower heat and simmer rapidly, stirring occasionally, until liquid is reduced by a third and very fragrant, about 20 minutes.

Remove pan from heat, stir in tea and cardamom, and let steep 2 minutes.

Return pan to medium-high heat and stir in milk and maple syrup. Cook, stirring occasionally and keeping a close watch, until mixture begins to foam up and boil, about 5 minutes. Immediately remove from heat and let sit 5 minutes. Strain chai through a fine-mesh sieve into a teapot or pitcher and serve.

Hi! My name is Emily and I'm a writer based in St. Louis. If I was stranded on an island and could request three items of food, they would be pain au chocolat, enchiladas, and Neapolitan pizza.
View all posts by Emily Wasserman →
This entry was posted in Drinks, Uncategorized and tagged cardamom, chai, chai tea, cinnamon, Drinks, ginger, homemade chai, tea. Bookmark the permalink.