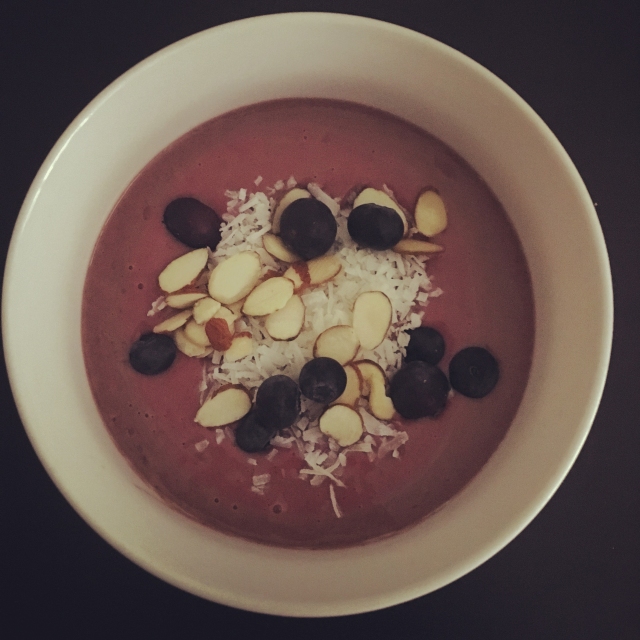 Sometimes I get a vision for what I want my food to look like when it’s done before I start making it. I look at picture of a recipe someone else has made for inspiration, but then all these ideas come flooding into my head. What if I ditched the granola and added toasted almonds? What if instead of strawberries, I went with blueberries? The options seem endless.

This morning, I went with a vision I had for a raspberry almond butter smoothie. I found the original recipe on BuzzFeed, but then I made some adjustments. I kept most of the base the same, but instead of granola and strawberries, I put blueberries, toasted almond and shredded coconut on top.

It ended up turning out just the way that I wanted it to. I tried to drink all the smoothie out of the bowl first with a straw, but I gave up halfway through because the blueberries and almonds were calling my name. Resistance is futile when it comes to this bowl.

Here is a great smoothie-making song that will also drown out the sound of the blender.

Blend the banana, 1 1/2 cup of the raspberries, almond milk, almond butter, and 1 tablespoon of the honey until smooth. Transfer to a bowl and top with the blueberries, toasted almonds, coconut and coconut. Enjoy!

Hi! My name is Emily and I'm a writer based in St. Louis. If I was stranded on an island and could request three items of food, they would be pain au chocolat, enchiladas, and Neapolitan pizza.
View all posts by Emily Wasserman →
This entry was posted in Smoothie Bowls, Uncategorized. Bookmark the permalink.