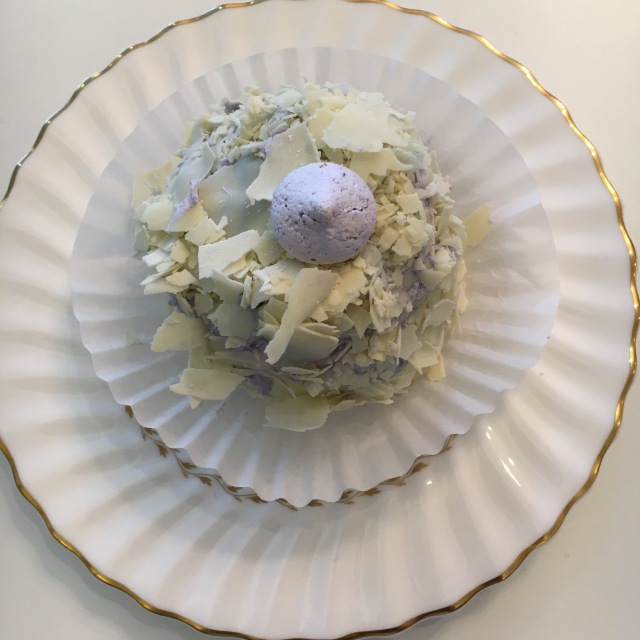 It all started with a merveilleux.

A few weeks ago, I ditched work early and was sitting outside with my friend Carly. I was scrolling through food news on my phone and I saw that a new French bakery in Dupont Circle opened that day called Un je ne sais Quoi.

I’d been looking forward to the opening for a while, mainly for French pastry-eating purposes. But then, I started to think. I miss speaking French all the time and I could use some extra cash. So I decided to go and see if they needed help.

I walked into the store and my eyes immediately went to the purple-colored meringue cake, also known as a merveilleux. It was so pretty and delicate that I almost didn’t want to eat it. But I ordered one anyway.

I smiled at the woman behind the counter as she brought it up to the register, and she smiled back. I figured that she was the owner so after I paid, I said, “Do you need help? I speak French.”

After she helped a few customers, we sat down at a table and talked about the job as I ate my merveilleux. Her husband, who makes all the cakes, came out and started speaking to her in French, not knowing that I also spoke the language. “Who is going to help out?” he asked her in French. “Moi,” I said.

And the rest is history. I’ve been working at the bakery with Aude and François for a few weeks now and I love every minute. I get to speak to some customers in French. And I only speak French with Aude and François. Even though I’m still far from France and I miss it all the time, now I feel like I have a little piece of it here in the U.S.

Plus, there’s something about being around pastries that puts me in a great mood. François makes the merveilleux, which are two meringue cookies with either ganache or whipped cream in between and whipped cream on the outside. You sprinkle them with chocolate shavings or cookie crumbles. It’s a specialty of northern France and Belgium, and I had never tried one until Un je ne sais Quoi opened.

How can you not be happy looking at this little box of heaven?

I also like the way that Aude decorated the place. The bakery’s logo has a deer (my spirit animal). And Aude always puts out fresh flowers by the cash register. She also got creative with the light fixtures.

I admire Aude and François for coming to the U.S. and opening their bakery. It takes a lot of courage, not to mention a lot of hard work. I feel lucky to be a part of it.

When I told Aude a couple weeks ago that my favorite animal was a deer, she said that it was fate. I couldn’t agree more.

Hi! My name is Emily and I'm a writer based in St. Louis. If I was stranded on an island and could request three items of food, they would be pain au chocolat, enchiladas, and Neapolitan pizza.
View all posts by Emily Wasserman →
This entry was posted in Dessert, Restaurant Reviews, Traveling, Uncategorized and tagged eclairs, french, french pastries, merveilleux, tarte aux pommes, tarte tatin, Un Je Ne Sais Quoi. Bookmark the permalink.