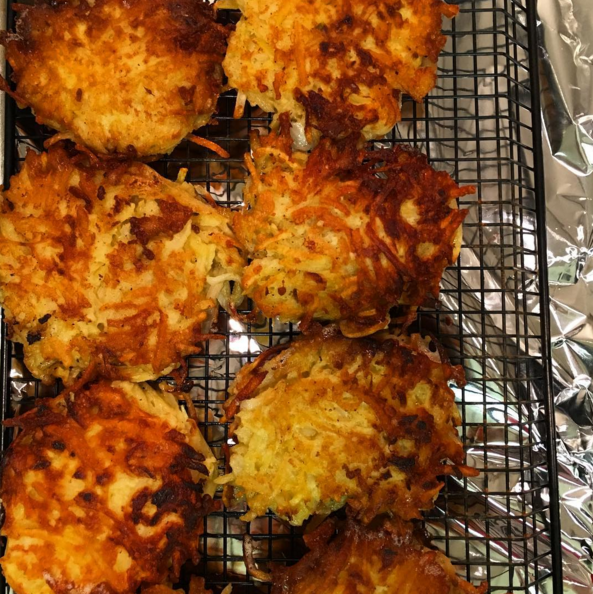 If you would have asked me a year ago if I’d be frying 50 latkes in December, I would have laughed in your face. My, how times have changed.

I’ve always celebrated Hanukkah, even though my level of dedication varies. Four years ago, I threw a party in my shoebox apartment in Chicago and grated 20 potatoes by hand. I don’t think I’ll ever repeat that experience, although some might argue it was character-building.

Part of being at home for the holidays this year means diving into Hanukkah traditions headfirst, including making latkes. I tasked myself with making them for the first night.

One of the best parts about making latkes is that you don’t really need a recipe. Ideally, you have a food processor, which makes the whole process easier. Throw in some potatoes and onions, shred them, and then mix them with a few eggs, salt, pepper and baking powder.

The challenge is frying the pancakes. But once you get into a latke-making rhythm, it all works out. I would form the pancakes into a ball in my hand and gently release them into the oil. Don’t flip them until the bottom side is golden brown and crispy. They’ll be easier to flip this way; underdone latkes tend to fall apart.

At the end of frying latkes, I felt like…a latke. There are worse things to smell like than fried potatoes, I guess.

Here’s a good song for latke frying. I was listening to the original version earlier and then my sisters told me about the RAC remix.

Latkes (from me, to you)

In another large bowl, beat the egg and mix in the baking powder, salt and pepper. Mix in the potato/onion mixture. I used my hands, but if that freaks you out, a spoon works, too.

Fill a large skillet with 1/2 inch oil. Heat over medium-high heat until the oil is very hot but not smoking. To test if the oil is hot enough, drop a small piece of potato into the oil; if the potato sizzles steadily, the oil is ready.

Working in batches, scoop the potato mixture by 1/4-cupfuls (or handfuls) and add them carefully to the skillet, flattening each latke slightly with a spatula. Fry, turning the latkes once, until golden brown and cooked through, about 3 minutes. Drain on wire racks over baking sheets lined with paper towels or foil. Serve with apple sauce and sour cream. Enjoy!

Hi! My name is Emily and I'm a writer based in St. Louis. If I was stranded on an island and could request three items of food, they would be pain au chocolat, enchiladas, and Neapolitan pizza.
View all posts by Emily Wasserman →
This entry was posted in Breakfast, Brunch, Dinner, Lunch, Uncategorized, Vegetarian and tagged frying, Hanukkah, latkes, pancakes, potato, potato latkes, potato pancakes, potatoes, tradition. Bookmark the permalink.