The first winter that I lived in France, I went to Belgium for a week for Christmas break. I spent most of my time drinking beer, gorging myself on chocolate, and eating waffles.

I grew up thinking that Belgian waffles were a poser breakfast. The ones we made at home were light and fluffy, and oftentimes they only tasted like butter and the waffle iron.

Then, I got to Bruges. The first night my friends and I were in town, we went to the Christmas market. I followed my nose to the waffle stand, where the vendor was selling smaller, more compact versions of the waffles that I ate at home. I ordered one and he put it in a white cardboard sleeve and drizzled chocolate on top.

When I took a bite, I realized that I had missed out on real waffles my whole life. Liège waffles are made out of brioche dough, so they’re thicker and chewier. The batter has big pieces of sugar inside called pearl sugar, and they melt in your mouth. The waffles are decadent, rich and warming.

As it turns out, Belgians sells the waffles everywhere, not just Christmas markets. You can order them at a shop window as you walk down the street in Brussels. You can also choose flavors, so I got one with raspberry batter. I’ll never forget the taste of the tart raspberries mixed with the sugar. Unreal.

I wanted to recreate the waffles at home, but I had trouble finding pearl sugar. Then, I realized that you could get it off Amazon. I also saw a recipe for Liège waffles in a local food magazine recently, so I decided that it was fate.

The waffles take some time to make. The process is spread out over two days, which might deter some people from trying it. But I’d advise you to forge ahead. One you make the dough, you just let it sit overnight in the fridge. In the morning, you divide it into portions, roll it into balls, and let it sit at room temperature before cooking the pieces in the waffle iron. 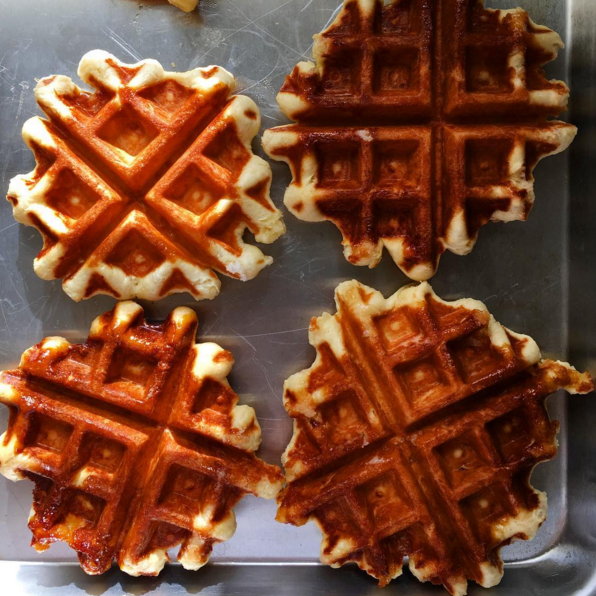 I made these the other day for my brother and his girlfriend, and the waffles were so dense that they each only ate one. The rest stay frozen for up to a month, so I see many waffle and Nutella breakfasts in my future.

Here’s a song for waffle-making and the New Year.

In a small saucepot, heat milk to scalding, or 180°F, using a candy thermometer to gauge temperature. Pour milk into a heatproof bowl and set aside, with candy thermometer, to cool to 110°F.

In the bowl of a stand mixer fitted with the dough hook attachment, add warm milk and then eggs, flour, salt, sugar and yeast. Mix on medium speed until dough is fully moistened and cleans the sides of the bowl, about 8 minutes. Scrape dough off hook, press together into bottom of bowl, cover and let rest for 10 minutes. Then add bowl back to stand mixer and begin adding butter on medium speed, increasing speed one setting at a time, until fully incorporated and dough is glossy and smooth, about 8 minutes. Add pearl sugar and mix just until incorporated. Place dough in an oiled bowl, making sure to coat dough in a little oil, as well, and tightly wrap with plastic wrap; refrigerate dough overnight.

Turn dough out onto a floured work surface and press into a rectangle 5 inches by 8 inches. Using a sharp knife, cut dough into quarters, then each quarter into 3 equal pieces for a total of 12 pieces. Round each portion into a ball and set aside to warm to room temperature for 45 minutes; lightly cover bowl with a tea towel. Preheat waffle iron on medium-high heat.

After dough balls have rested and waffle iron is hot, bake each waffle in iron until a deep golden brown. Serve with apricot jam, powdered sugar or chocolate sauce. Enjoy!

Hi! My name is Emily and I'm a writer based in St. Louis. If I was stranded on an island and could request three items of food, they would be pain au chocolat, enchiladas, and Neapolitan pizza.
View all posts by Emily Wasserman →
This entry was posted in Breakfast, Uncategorized, Vegetarian and tagged Belgian, Belgian food, belgian waffles, breakfast, brioche, brioche dough, liège waffles, pearl sugar, sweet, waffles. Bookmark the permalink.