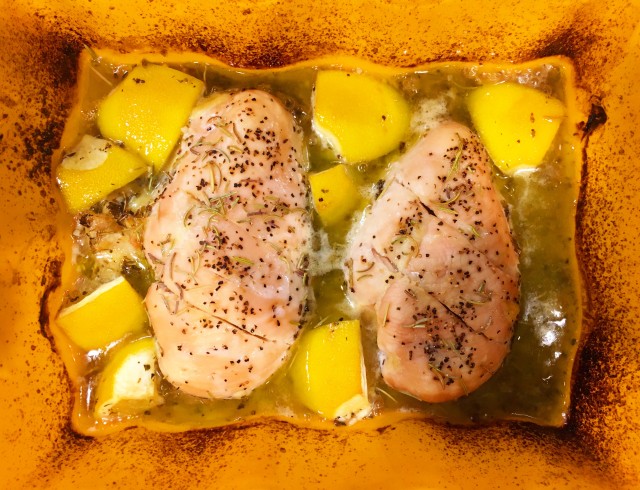 My mom and my sisters love Ina Garten. They watch her cooking show. My mom owns a bunch of her cookbooks. My youngest sister had an Ina Garten Instagram account for a while, but I think she’s deleted it. They all do excellent imitations of Ina talking to Jeffrey, her lifelong love, husband, and primary taste tester.

ANYWAY. I love Ina as much as the next person but I haven’t really tried her recipes. I think it’s partly because I was being contrarian. My sisters and my mom were fawning over her recipes, so naturally I didn’t want anything to do with them. I have this instinct to resist what is “trendy” or “popular,” even if it defies logic to be this way.

Which brings me to this lemon chicken. I cook a lot at home but I don’t make chicken very often. In fact, I’ve never made baked chicken. My sister just started to cook more and she was raving about Ina’s baked lemon chicken recipe. She and her husband invited me over for dinner last night and I asked her to teach me how to make it. She waited until I got there and then she coached me through the process.

As it turns out, making baked lemon chicken is super easy. All you do is whisk together some oil and spices, pour it into a casserole dish, plop in the chicken breasts, garnish them with more spices, salt, and add some lemon wedges to the sauce. We sprinkled some dried rosemary on top even though the recipe didn’t call for it, because as my sister said, lemon and rosemary go well together.

We set the oven timer for 45 minutes. Time passes more quickly if you’re talking to someone in the kitchen. After 45 minutes, we went to check on the chicken. My sister knew just by looking at them that they needed more time. Then, she suggested cutting them open to check on the insides.

I almost had a panic attack because I was approaching the baking process from a sweets perspective. The thought of making multiple cuts into a loaf of bread or a cake to see what the inside looks like terrifies me.

Encouragingly, cutting into a chicken breast isn’t bad at all. In fact, it’s good. It allows more of the sauce to seep in and get the breasts nice and plump. It doesn’t affect the outside of the chicken, or the skin, which still gets crispy and browned.

I ate half a chicken breast on my own and I could have eaten another half, but I saved room for dessert. I brought some of my go-to chocolate chip cookies and we shared them, and then we tried different flavors of Albanian gummy bears to see which ones were the best.

I had such a good time making this chicken with my sister. She made me a baked chicken believer AND she convinced me to try more of Ina’s recipes in the future. If they’re all this easy and delicious, there’s no reason to resist.

Maybe one day I’ll have my own cooking show and my sister can be a guest star, and Ina can make a featured appearance.

Meanwhile, I’ll leave you with this song.

Hi! My name is Emily and I'm a writer based in St. Louis. If I was stranded on an island and could request three items of food, they would be pain au chocolat, enchiladas, and Neapolitan pizza.
View all posts by Emily Wasserman →
This entry was posted in Dinner, Uncategorized and tagged baked chicken, baked lemon chicken, Chicken, delicious, dinner, easy, easy dinner, easy recipes, Ina Garten, lemon, lemon chicken, olive oil, oregano, rosemary. Bookmark the permalink.