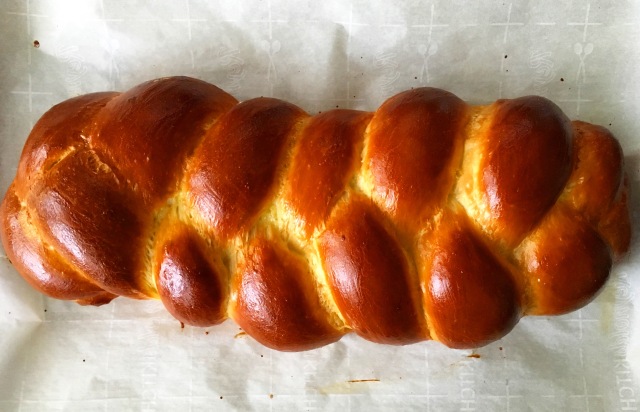 The other night I was on the phone with my best friend Rachel and she was telling me about hamantaschen that she made recently for Purim. I miss the days when I lived in D.C. and Rachel would drop off a bag of cookies for me. Then she started telling me about a challah I made that was really good and I shared with her.

I don’t remember making the challah but I know she’s telling the truth. In fact, the only strong memory I have of trying to make challah in D.C. is in my first apartment, when for some reason the recipe that I used for years wasn’t working and my bread refused to rise. I didn’t want history to repeat itself so this past weekend, I decided to make challah using a recipe from Feast Magazine.

I omitted rosemary from the recipe but other than that, I followed it word for word. It comes from Christy Augustin, one of my favorite bakers in St. Louis and the owner of a popular South City bakery, Pint Size.

This challah is eggy, slightly sweet, and light to the point of being ethereal. It literally melts in your mouth, which makes it dangerously easy to consume half a loaf (or dare I say, a whole loaf) on your own in one sitting.

The only caveat is, it might take your challah longer to rise than it says in the recipe. It took my loaf about two hours to rise in a closed oven with the oven light turned on, instead of the hour the recipe stipulated. It’s okay because it was Saturday afternoon and I was fine lounging around the house, but beware that different temperatures and environments could affect the proof time for the bread.

Some of you might be worried about the olive oil in the bread, but don’t be. It’s very subtle and honestly, you can barely taste it. Maybe it would have been different if I added the rosemary, but at least in the loaf I baked, the oil wasn’t overwhelming.

This bread is delicious served with jam or honey. I also ate a slice yesterday for lunch toasted and with lemon sumac yogurt sauce on top. It was even better than the bread with jam on top. I think I’m on to something.

I might make challah French toast with the leftover bread later this week, so stay tuned.

Here’s a song to get you started on your challah journey.

Hi! My name is Emily and I'm a writer based in St. Louis. If I was stranded on an island and could request three items of food, they would be pain au chocolat, enchiladas, and Neapolitan pizza.
View all posts by Emily Wasserman →
This entry was posted in Bread, Uncategorized and tagged baker, baking, bread, challah, egg bread, home baker, home baking, Jewish baking, jewish cooking, Jewish food. Bookmark the permalink.