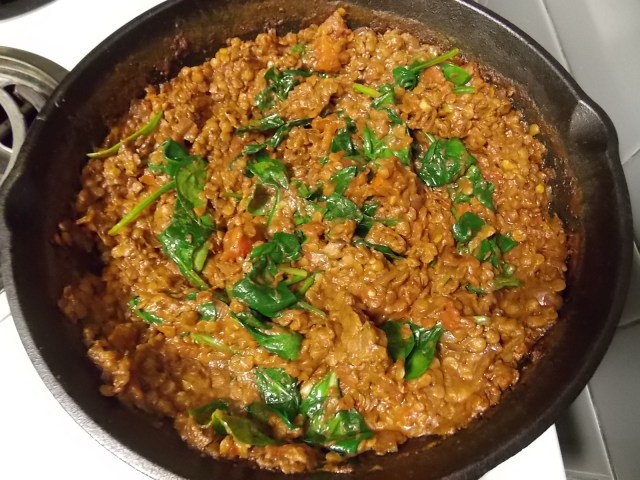 I love making Indian food at home, but sometimes it doesn’t turn out exactly the way I planned. Like the time I tried to make bhindi masala (okra and tomato sauce). One of my best friends is Indian, and when she was still living in Chicago, she made us the dish for dinner one night. I had never eaten okra, and I remember that we used roti (wheat bread) to scoop up little pieces of vegetable and sauce. It was delicious, and because I was eating it slowly, I savored every bite.

I was craving the dish recently, so I asked her for the recipe. She gave me verbal directions, but I kept worrying that I would mess up the dish. I wanted it to be exactly the way I remembered…which, in retrospect, was a near impossible feat. I tried anyway, and it ended up tasting okay–but something was missing.

Last night, I decided to make a recipe I’ve been meaning to try for a while: Red Lentils Masala with Spinach. As you can probably tell by my recent posts, I’m enjoying one-skillet meals. And as the weather gets colder, I start gravitating toward comfort food. This dish mixes fragrant spices, rich coconut milk, hearty lentils and tomatoes. The spinach adds a nice touch of green at the end, and balances out the spices and creaminess.

Unlike when I made bhindi masala, I decided to improvise a little. I used the recipe more as a reference book than rule book, and I eyeballed a lot of the measurements. I also decided to make the masala paste in the skillet, rather than beforehand. It saved me the step of using a food processor, or grinding the seeds and tomato paste by hand.

I served the lentils with store-bought naan, but if you feel like making your own, you can try this recipe.

Making this dish taught me that a big part of cooking is improvising, and trusting that it will turn out okay in the end. Now, onto the next masala…

Hi! My name is Emily and I'm a writer based in St. Louis. If I was stranded on an island and could request three items of food, they would be pain au chocolat, enchiladas, and Neapolitan pizza.
View all posts by Emily Wasserman →
This entry was posted in Dinner, Vegetarian and tagged indian food, make your own naan, masala, masala sauce, Naan, one skillet meals, red lentils, red lentils masala with spinach, skillet dinner, Spinach, vegetarian, vegetarian food. Bookmark the permalink.