Brûléed Grapefruit with Honey and Pistachios 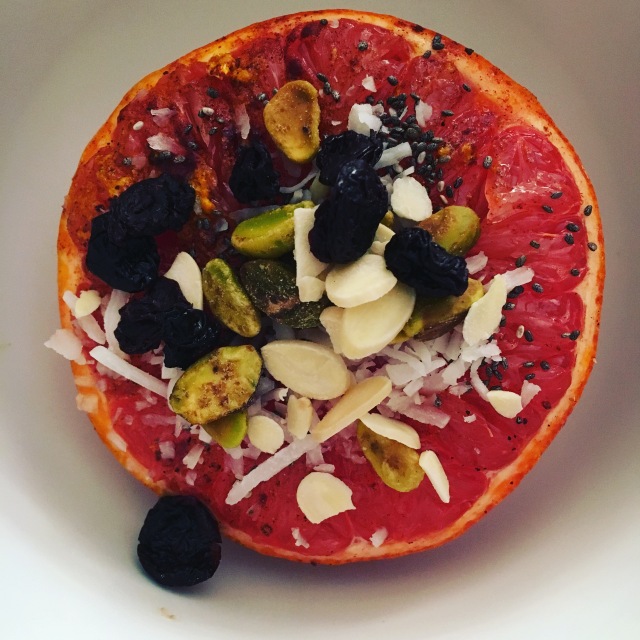 Sometimes, all you need is some brûléed grapefruit.

Last week, my friend/co-worker Carly sent me a picture of a broiled pomelo with raw honey, pistachios and coconut on Instagram. After some discussion, we decided to go back to my place after work and make a couple. It had kind of been a stressful day, and at one point, Carly thought I was talking to her from inside of a plant. Needless to say, we needed some stress relief, ASAP.

We used grapefruit instead of pomelo, because they didn’t have any pomelos at the grocery store. But the effect was still the same. Drizzle a spoonful of raw honey on top of a sliced grapefruit, and sprinkle on some cinnamon, nutmeg and turmeric. Place it in the oven and let the broiler work its magic. Then, when the surface is nice and caramelized, take it out and sprinkle some dried cherries, pistachios, coconut, almonds and chia seeds on top. This could be a delicious snack, breakfast, or even a late night treat.

Brûléed Grapefruit with Honey and Pistachios

Pre-heat the oven to broil.

Slice a grapefruit or pomelo in half and place it in a shallow pan, cut side up. Drizzle some raw honey on top until it’s well-coated, and sprinkle on some turmeric, cinnamon and nutmeg.

Place the pan with the grapefruit in the oven and wait for the broiler to make it nice and caramelized brown on top. It will take a few minutes, and make sure to keep an eye on it so it doesn’t burn.

Once it’s done, take the grapefruit out of the oven and let it cool slightly. Sprinkle with pistachios, chia seeds, sliced almonds, shredded coconut and dried cherries. Enjoy!

Hi! My name is Emily and I'm a writer based in St. Louis. If I was stranded on an island and could request three items of food, they would be pain au chocolat, enchiladas, and Neapolitan pizza.
View all posts by Emily Wasserman →
This entry was posted in Breakfast, Brunch, Uncategorized, Vegetarian and tagged almonds, bruleed grapefruit, coconut, dried cherries, grapefruit, healthy, honey, pisatchio. Bookmark the permalink.