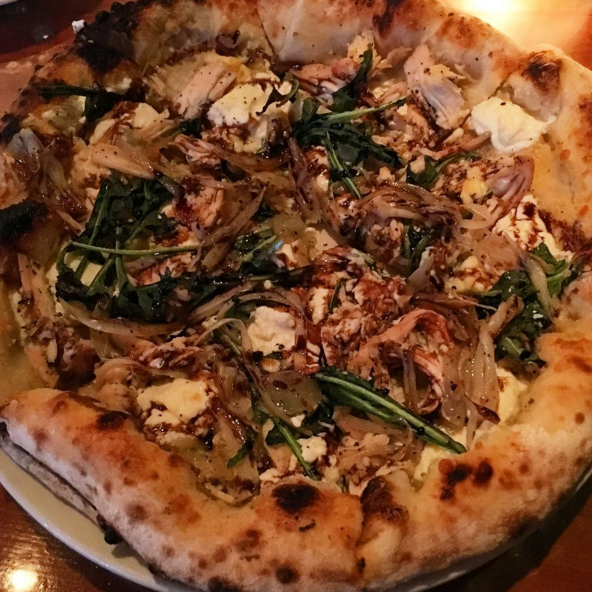 If I had to choose one word to describe Katie’s Pizza (besides delicious), it would be consistent. I’ve never had a bad experience eating their pizza, which is an impressive feat because I’ve been going there for years.

The first restaurant opened when I was still in undergrad at Wash U, so I would go there for dinner occasionally with my friends. Then, a new location opened in a neighborhood called Rock Hill. I went to that one for the first time after I moved home last year and it was just as delightful as the original.

I like Katie’s Pizza because it takes risks. There are pies on the menu that people might not order at usual pizza establishments in St. Louis, and I’m glad. The mozzarella/red sauce routine gets boring after a while and I’m always craving new flavors.

I went to Katie’s the other night after work and ordered the roasted chicken pizza, which I’d never tried before. Usually I go for their vegetarian pizzas so I was wondering how the meat-laden version would measure up. In short, it surpassed the vegetarian pizzas.

The roasted chicken and the slightly charred crust give the pizza a smoky flavor, and the goat cheese cools it off a little. The caramelized shallots and balsamic on top add some sweetness.

My favorite part about Katie’s pizzas is the crust: It’s fluffy, springy and chewy. I don’t know how it manages to be all these things, but it does. I could make a meal out of eating the crusts.

Anyway. If you’re in St. Louis and you’re looking for an alternative pizza experience, stop by Katie’s. It will not disappoint. Here’s a song that describes how I feel when I eat their pizza.

Hi! My name is Emily and I'm a writer based in St. Louis. If I was stranded on an island and could request three items of food, they would be pain au chocolat, enchiladas, and Neapolitan pizza.
View all posts by Emily Wasserman →
This entry was posted in Pizza Break, Restaurant Reviews, Uncategorized and tagged dinner, Katie's Pizza & Pasta, pizza, pizza night, pizza restaurant, roasted chicken, St. Louis, St. Louis pizza. Bookmark the permalink.