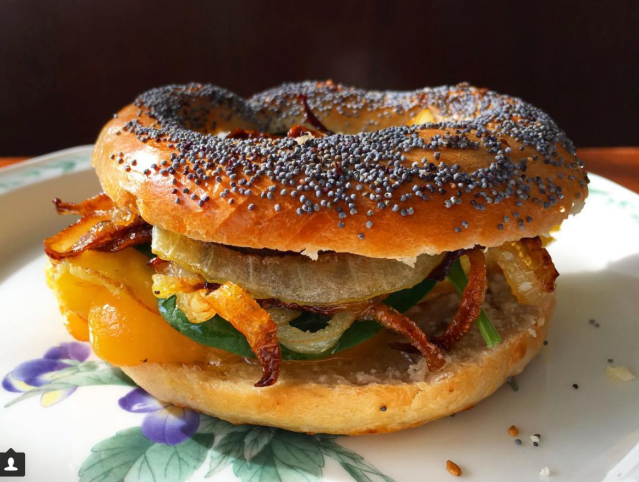 When I lived in D.C., every Saturday I would go to Glen’s Garden Market for a breakfast sandwich. I’d always order the “Grains & Greens,” or scrambled egg, cheddar cheese, caramelized onions, pickled jalapeños, salsa, arugula, and cilantro. I’d get it on a poppyseed bagel from Bullfrog Bagels, a local bagel joint.

It’s difficult to describe how much I loved this sandwich. If I was working on a Saturday morning and I didn’t get a break until noon, I would literally sprint up Connecticut Avenue to make it to Glen’s in time to get the sandwich. I hated settling for anything else. I loved the Grains & Greens, and it loved me, too. I would sit there, eating my bagel in a state of near ecstasy.

What made the sandwich better than other breakfast sandwiches? A number of things. First of all, there was the soft bagel with crunchy poppy seeds. Then there was the sweetness of the caramelized onions balanced with the spicy jalapeños and green salsa. The cilantro and arugula gave the sandwich a little bite, and the scrambled egg and cheddar comforted me even when I didn’t think I needed comforting. I think I just described the perfect relationship. I guess I’m lucky to have found it in a bagel.

Fast-forward to this past week. I started thinking about the Grains & Greens a lot and missing it, so I decided to try to recreate it in St. Louis. I’d made a fresh batch of bagels (more on that here), so I had my base ready. I went out yesterday to get the rest of the ingredients.

I didn’t quite make the Grains & Greens sandwich that I had in D.C. I omitted a few ingredients including the jalapeños, salsa, and cilantro. I subbed in spinach for arugula because it looked better at the grocery store. I got high quality cheddar cheese because cheese is crucial. I knew it would make a difference and it did.

I was a little worried about how the sandwich would stack up with the one I ate in D.C. I thought at the very most, it would be a second-rate impostor.

I was wrong. The sandwich was almost as good, if not as good, as the one I used to eat at Glen’s. It made me realize a bunch of things, including the fact that if you have a few core ingredients or flavors, you don’t need the rest. For example, keeping the egg, cheddar, greens, caramelized onion, and bagel was critical. This was and is the crux of the Grains & Greens. When I tasted these flavors together, memories started rushing in.

I also realized that sometimes, if you’re lucky, revisiting a favorite dish or memory can yield satisfying results. I remember once I went back to the village in France where I studied abroad for the first time. It was during the winter, not the spring, so the time of year was different. But it was also much smaller and less impressive than I remembered. It was disappointing.

I expected a similar thing to happen when I tasted my version of the Grains & Greens, but luckily, it didn’t. I was excited that I could create a version of the dish that so closely matched the one in my memories. Maybe my expectations were lower, or maybe I just got lucky. But something tells me that certain things, whether they’re a dish, a person, or a place, are meant to stay with us forever.

1 poppyseed bagel, sliced in half (and toasted if you prefer)
2 eggs
pinch of salt and pepper
4 slices of Tillamook cheddar, sliced thin
1/2 yellow onion, sliced into thin rounds
handful of spinach or arugula
sunflower oil or vegetable oil for frying onions
1/2 Tbsp butter for frying eggs

Heat the sunflower oil or vegetable oil in a skillet over medium high heat. When the pan is hot, add the yellow onion. Reduce the heat and cook, stirring occasionally, until the onion is brown, soft, and caramelized.

In the meantime, make the eggs. Whisk together the eggs with a pinch of salt and pepper. Heat another skillet with butter. Once the pan is hot (you can flick a little water on to see if it sizzles), pour in the eggs. Allow the eggs to cook like you would an omelette. Once they’re mostly set, place the cheese slices on one side. Allow them to melt down a little before folding the eggs up with a spatula. I usually start by folding one side over to seal the omelette, and then folding it again to it looks like a crêpe. Press the eggs down with your spatula to flatten them.

Assemble the sandwich by putting your egg on one slice of bagel. Top with spinach and onions, and then the other half of the bagel. Enjoy!