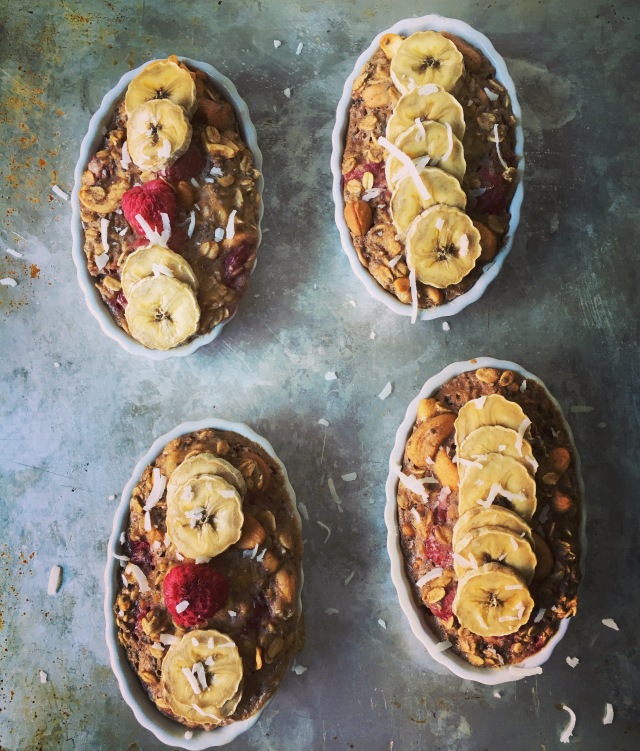 Nothing says the day after a blizzard like baked oatmeal. I woke up the morning after the snow stopped in D.C. and I was going to make a smoothie.

But then I sat in bed for a while scrolling through pictures of oatmeal on Instagram, and I decided to change my game plan. When I saw this recipe for baked banana oatmeal with raspberries, it practically jumped off the screen saying “make me now.”

I was worried because in the picture, the oatmeal is served in ramekins. And I didn’t think that I had any lying around. Then I remembered that I had an old creme brûlée kit that came with four china ramekins, so I dug that out of the closet.

The dish comes together quickly, and the smell of the oatmeal as it bakes in the oven is nothing short of heavenly. The smell is a combination of banana bread, nuts and a berry crisp…I’m almost tearing up just thinking about it (this is not an exaggeration).

I also wanted to give a shout out to this blog, Rebel Recipes. I found the baked oatmeal recipe through the blog’s Instagram handle but then I visited the site. It’s very vegetarian and vegan-friendly and there’s no shortage of delicious, healthy breakfast recipes. I’m all about pancakes and French toast, but if you’re looking for colorful smoothies and oatmeal dishes, this is the blog for you.

Mix all the dry ingredients in a bowl then add in the banana, sweetener, vanilla extract and almond milk.

Mix everything together and the divide between four small ramekins or two large ramekins. Top with some banana slices and raspberries.

Bake for approximately 25 minutes then allow to cool for a few minutes.

I highly recommend drizzling with some maple syrup to finish. Enjoy!

Hi! My name is Emily and I'm a writer based in St. Louis. If I was stranded on an island and could request three items of food, they would be pain au chocolat, enchiladas, and Neapolitan pizza.
View all posts by Emily Wasserman →
This entry was posted in Breakfast, Brunch, Uncategorized, Vegetarian and tagged baked banana oatmeal, baked oatmeal, banana, breakfast, brunch, cashews, chia, healthy, raspberries. Bookmark the permalink.

2 Responses to Baked Banana Oatmeal with Raspberries and Cashews