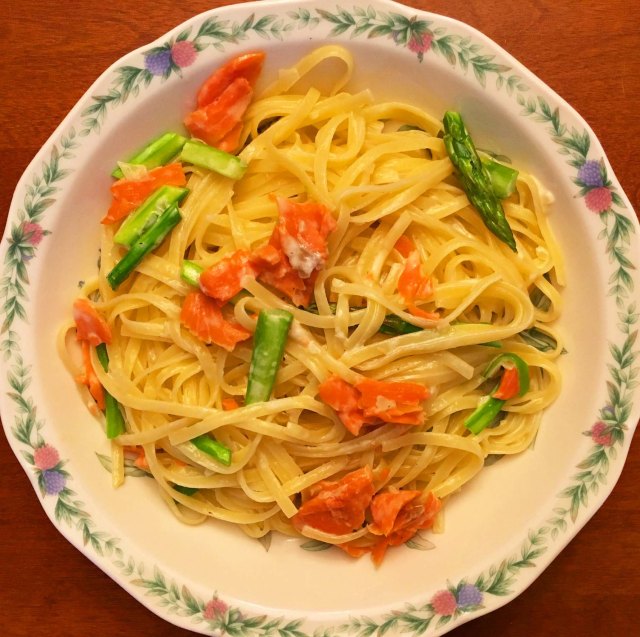 Nothing says spring to me like asparagus. When I start seeing the bright green bundles at the grocery store, I know we’ve turned a corner and officially said goodbye to the cold weather.

I usually roast asparagus in the oven and serve it with some Parmesan cheese, a poached egg, and a squeeze of lemon juice, but last weekend I wanted to do something different. I thought about making fettuccine but I couldn’t find any at the grocery store, weirdly. So I decided to sub in linguine.

I don’t make many cream sauces and I’m not sure why. It probably has something to do with the fact that they take more time and I have no patience. Also, they’re not the healthiest thing in the world. But sometimes you need to kick health to the curb.

This shallot cream sauce is EVERYTHING. You start by mincing the shallot and then frying it in butter. It gets soft and slightly brown. Then you mix in some cream and let the sauce thicken. It’s heavenly on linguine and pairs well with the smoked salmon and asparagus.

Part of this recipe involves peeling asparagus. I’d never done that before and I was a little skeptical. I’m a big believer in using every part of a vegetable or fruit if you can.

Still, peeling the asparagus was worth it. It makes it a little more soft and tender once you steam it and add it to the pasta. You can use a regular vegetable peeler, or one that you would use to peel an apple. A trick is to hold the tops (the part that looks like a tree) and then peel downward. It will speed up the process.

I ate half of this pasta in one sitting and then saved the other half for lunch the next day. Sitting at my desk with a vat of pasta is one of my favorite pastimes. Maybe that sounds like torture to some people but I can think of few things more satisfying. Not every pasta tastes good on day two but this one does. The asparagus is still slightly crunchy, fresh, and green, the smoked salmon tastes even better, and the sauce coats every strand of linguine. It’s a pasta symphony, so to speak.

Here’s a song to get you started on your pasta-making journey. Tennis is one of my all-time favorite artists. She can do no wrong.

Cut the asparagus on the diagonal into one-inch pieces. Steam the asparagus for about three minutes, or until they’re bright green and slightly tender. Run under cold water, dry on paper towels, and set aside.

Melt the butter in a large skillet over medium heat. Add the shallots and cook until they’re soft but not too brown. It’s okay if they get slightly golden colored. Mix in the heavy cream and simmer the sauce for about four to five minutes, or until it’s thickened.

Add the salmon to the skillet and toss to coat with the sauce. Remove from heat and season with pepper and lemon juice. Then mix in the steamed asparagus.

Heat a large, heavy-bottomed pot filled with salted water. When it comes to a boil, add the pasta and cook to package directions. Once it’s done, return the skillet with the cream sauce to low heat and reheat it for a minute or two. Pour it over the noodles and toss to coat. Enjoy!

Hi! My name is Emily and I'm a writer based in St. Louis. If I was stranded on an island and could request three items of food, they would be pain au chocolat, enchiladas, and Neapolitan pizza.
View all posts by Emily Wasserman →
This entry was posted in Dinner, Uncategorized and tagged asparagus, cream, cream sauce, delicious, dinner, fish, pasta, pasta night, Seafood, shallot, shallots, smoked salmon, smoked salmon and asparagus pasta, spring dinner, spring recipes. Bookmark the permalink.