So…If you’ve read my post on Chocolate Chip Banana Bread, you know how I feel about Chocolate Chips.  Especially Chocolate Chips and Baking.  I love incorporating them into cookies, cakes, and just about anything that you put in the oven.  They melt in your mouth, and add a little kick of flavor to more bland desserts and breads.

So when I stumbled upon a recipe for Peanut Butter Chocolate Chip Brownies, I knew I had to try it.  Chocolate and peanut butter is one of my favorite flavor combinations, as the slightly salty, nutty taste of the peanut butter compliments the smooth, sweet taste of the chocolate.

I had been eyeing this recipe for over a week, but didn’t have the two bags of semi-sweet chocolate chips to make them.  Or the heavy cream.  I did have a jumbo-sized tub of peanut butter, though, so I made a quick grocery store run for the other ingredients.

Needless to say, the grocery store trip was worth it.  The brownies were easy (and delicious) to make.  If you’re like me, you’ll indulge in multiple taste tests throughout the baking process.  The dough before the addition of the chocolate chips was delicious, and of course, I had to try it again after the adding the chips. Who cares about raw eggs? It’s peanut butter and chocolate!

I thought about skipping the step that requires you to line the bottom of the pan with parchment paper, but I would actually recommend that you follow this instruction.  It will make the brownies easier to cut and remove from the pan later, and save you the hassle of scrubbing out an 9×13 inch pan. 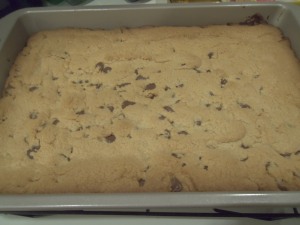 The hardest part about this recipe: the waiting time.  The recipe recommends a 40-45 minute bake time (I’d check them at 40…mine could have been taken out before 45 minutes), and then, an hour and a half cooling time.  You need to let them cool, though, because of the last step, which is…

The ganache.  I had never made ganache before, but it was as simple as boiling heavy cream, pouring it over a bowl of chocolate chips, and whisking it all together with a pat of butter.  I sort of felt like the woman from the movie Chocolat…Except unfortunately, I wasn’t working in a small French village.

Make sure the brownies are cool before you add the ganache.  When you spread it over the brownies, you can let it set for 15 minutes, like the recipe recommends. I’d suggest eating the brownies right away, while they’re still warm, crumbly, and gooey.

But if you wait until the next day, the ganache will harden, and the brownies will start to resemble bars.

Either way, you can’t go wrong with this recipe.  It’s a bit tortuous to wait for the finished product, but in the end, it will be worth it.  I dare you to eat just one brownie…

Make brownies: Preheat oven to 350 degrees F with rack in middle. Butter a 13- by 9- by 2-inch baking pan, then line bottom of pan with parchment paper and butter parchment. Beat together butter and sugar with an electric mixer at medium-high speed until mixture is light and fluffy, then add peanut butter and beat until incorporated. Beat in whole eggs, egg yolk, and vanilla. Reduce mixer sped to low, then mix in flour until just combined. Mix in chocolate chips (1 1/2 cups) then spread batter in baking pan, smoothing top. (It will be thick, almost like cookie batter.)

Bake until brownies are deep golden, puffed on top and a wooden pick inserted in center come out with some crumbs adhering, 40 to 45 minutes. Cool completely in pan on a rack, about 1 1/2 hours.

Make ganache: Put chocolate chips (1 1/2 cups) in a heatproof bowl. Bring cream to a boil in a small saucepan, then pour over chocolate chips and let mixture stand for one minute. Gently whisk in butter until it is incorporated, chocolate is melted, and a smooth mixture forms. Spread ganache on cooled brownies and let stand until set, about 15 minutes.

Brownies keep in one layer in an airtight container three days.