Weekends are funny things.  I don’t think I ever really appreciated them until I started working.  In college and high school, weekends sort of felt like an extension of the regular week; I would still have homework to do, I just wouldn’t have to get everything done in one night.  I could sleep later, but more often than not, I would have to get up for some school-related commitment.

Now, I still wake up early (I guess mostly out of habit), but I take my weekends much more seriously.  I.e., I try to do as little work as possible, and take advantage of the 48 hours I don’t have to sit at a desk, answer the phone, and contend with the outside world.  I read, I bike, I go out in search of new restaurants…And most of the time, I bake.

This past weekend, I decided to try a new recipe, one I found in a discarded issue of Bon Appetit that was hiding in my living room couch.  I usually shy away from Bon Appetit’s recipes, not so much because they’re intimidating (which oftentimes, they are), but because of the lengthy ingredient lists and time-consuming process.  How many of us have candied ginger in our pantries, or want to take the time to cut almonds into slivers?  Yes, good food takes time, effort, and concentration…But by Sunday night, I’m starting to lag in those three categories.  Which is why the Blackberry Financiers were the perfect solution to a sugar craving I had at 8 PM on a Sunday night.

The ingredient list was very small, and I already had most of what I needed in my refrigerator.  Plus, Financiers are French, so that added to my motivation; For those of you who are unfamiliar with Financiers, they could be best described as small, moist sponge-like tea cakes that usually have a dome on top.  They are golden and buttery, and their name comes from the french word for “bar of gold,” because this is what they resemble in their purest form (financier=finance=bar of gold…an easy way to remember the word.) Legend also states that the cakes became popular in Paris’s financial district, and thus received their name…But I like to picture them as little gold coins.

This recipe called for mini-muffin tins, and were smaller than the Financiers I remember from French bakeries.  Nevertheless, they were the perfect consistency; moist, buttery, soft, warm…They almost melted on my tongue.  The berries gave the cakes a nice, tart flavor, and the light dusting of powdered sugar tied all the ingredients together. 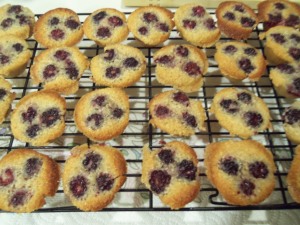 Also, I wanted to note the browned butter component of this recipe…Some of you might be tempted to skip this step.  After all, melted butter is melted butter, right? Wrong. And I learned this from my experience making the Financiers.  The recipe promised that browning the butter would unleash a “warm, nutty aroma,”…I think they may have even used the word “smoky.”  As the butter simmered in my small saucepan, I began to doubt the sage advice of Bon Appetit.  It didn’t look or smell any different than usual. 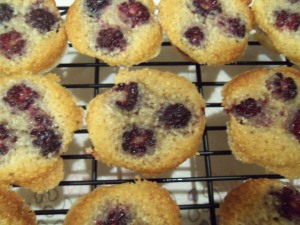 But then, about five or six minutes into the simmering, I began to smell a rich, complex aroma…It was nutty and smoky, and wasn’t at all like the smell of buttered popcorn (an overwhelming butter smell).  This smell was less cloying, and much more inviting.  As the butter browned, and I scraped bits off the bottom, I began to understand why chefs and bakers rely so much on their sense of smell. I could tell when the butter was ready to be removed from the heat just by inhaling the steam; it’s somewhat unnerving to rely on my sense of smell, when I’m usually (literally) all eyes and ears.  But that’s what I love about baking and cooking; when I’m making food, I can bring all my senses to the proverbial table.  And through all my mistakes and trials, I still feel like I’m learning.

Needless to say, the financiers were a hit.  Everyone in my family had at least two (I think my brother may have had four), and when I brought the leftovers to work the next day, my boss deemed them “sinful.”  They were still moist (even more so) almost a day later, and the berries were fresh and juicy. 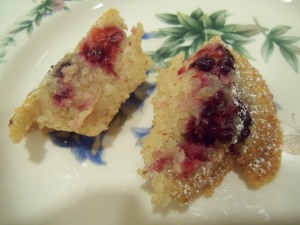 They might not be the original “financier,” but these cakes still live up to their namesake. Small, buttery, and delicious…They’re worth the prep time.  Even on a Sunday night. 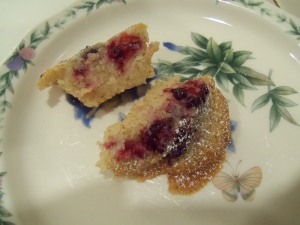 *The recipe says to bake the financiers for 15-16 minutes…Once again, it’s probably my malfunctioning oven, but I would check them after fifteen minutes, and leave them in for at least eighteen-nineteen minutes.  Mine were in the oven for twenty.