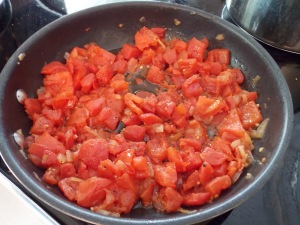 Awhile back, my younger sister Mollie and I tried our hand at creating our very own Pomodoro sauce.  If I had to guess, I’d say I was about eighteen or nineteen, and she was still in high school.  The only tomatoes we had in the house were grape tomatoes (the ones grocery stores sell in little plastic spheres), and neither of us had much experience cooking.

Needless to say, all these elements spelled out a recipe for disaster.  Both of us have vague recollections of our attempted Pomodoro sauce; my memories include plasticy-tasting tomato skins and the overwhelming taste of water.  Mollie (much more to-the-point in nature) likes to describe it simply as “gross.”

Now, years later we still talk about our failed attempt at making Pomodoro sauce.  Both of us have had more cooking experience by now, but sometimes destroying a recipe is like falling off a bike, or drinking red Gatorade when you have the stomach flu.  You’re literally and figuratively scarred for life, and the mere thought of getting back on the proverbial bike (or imbibing red Gatorade) makes you queasy.

But today, for the first time in awhile, Mollie and I were both at home for lunch.  She is taking a week off work before going back to school, and I’m preparing for my move to Chicago.  We were debating about what to eat for lunch when Mollie suggested making pasta.  I was a little surprised, but then realized that enough time must have passed, and both of us were ready to try again.  The time, as it seemed, was now. 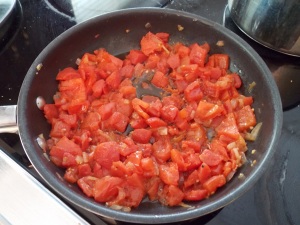 Luckily I had a big, overripe tomato on hand (I buy most of my produce now from a Farmer who lives down the street), and a can of diced tomatoes.  I also found half a white onion in the fridge and some minced garlic.  This time around, we had all the right ingredients…the question was, how would the sauce turn out?

Throughout the preparation, Mollie helped me in all the right ways…In true Pre-Med fashion, she suggested a lid for the skillet when I was worried that the tomatoes weren’t simmering, adding extra olive oil to the sauce, and coordinated the timing of boiling the pasta.  Basically, whenever I hit a road-bump during the cooking process, she was there to take the reins.

We started tasting the sauce minutes before the pasta was done cooking, and were pleased with the results.  Instead of looks of pure disgust (like during our last attempt), we actually enjoyed tasting what we had created.  Mollie suggested adding a little more garlic at the last minute, and I added more fresh ground pepper.  By the end of lunch, we still had half a pot of noodles left, but the sauce had completely disappeared.

I’m glad that after all these years, we managed to finally create a Pomodoro sauce worth eating.  And I’m sure that this recipe is one we’ll be using for many years to come.

1 can of no-salt-added diced tomatoes, drained

1.) Heat about 3 tbsp of olive oil in a skillet over medium heat.  Test heat of oil by flicking water onto skillet.

2.) When oil is thoroughly heated, add chopped onions and garlic.  Cook 2-3 minutes until onions are slightly browned and translucent, and garlic is fragrant.

3.) Add canned and regular diced tomatoes to skillet.  Stir to combine with onions and garlic.  Season with salt and pepper, and add 1-2 more tbsp of olive oil.

4.) Cover skillet and let tomato, onion, and olive oil mixture come to a simmer.  Continue to cook until most of the olive oil is absorbed, and seasons with more salt and pepper to taste.