This is what it looked like in Chicago on Tuesday: 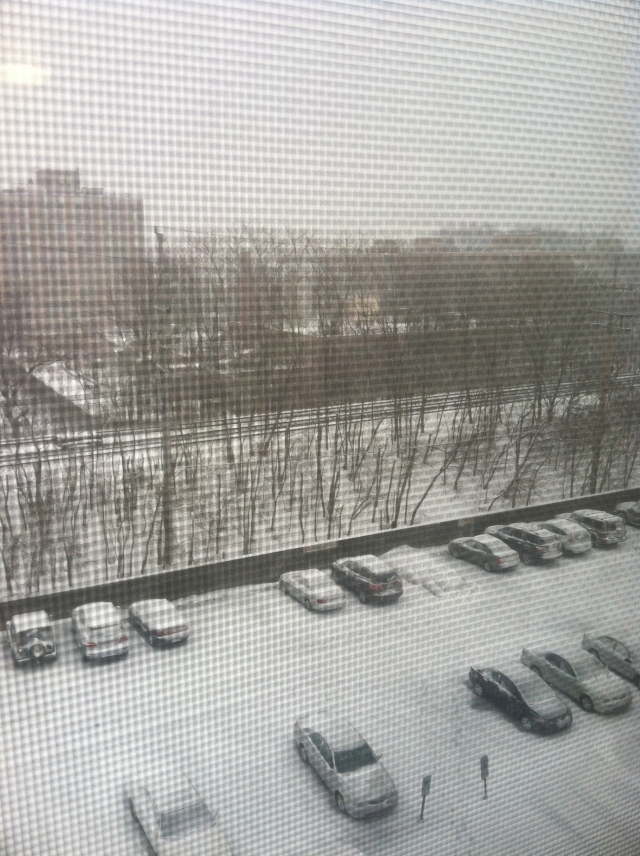 Note the car that is completely covered in snow.

When I decided to attend Northwestern, I knew what I was getting myself into. I knew that winters in Chicago had the reputation of being brutal, and I was prepared for the worst: I bought a huge, puffy down jacket, boots, and more gloves than any one person needs.

But while I was preparing, I never considered that the weather would actually get worse as the months progressed. I guess after living in St. Louis my whole life, I assumed that by March, things would calm down.

Clearly, they have not.

I don’t want to seem like I’m complaining (even though for all intents and purposes, I am). I was just completely taken aback by snow coming down sideways (so I couldn’t look up as I walked), lingering black ice on sidewalks, and the dread that comes from hearing an “Eastern storm front” is coming through. Although weirdly, I feel like Chicagoans almost enjoy this news. It’s as if they take it as a challenge, and whoever acts the least affected by it wins.

I’ve devised my own method of dealing with the bad weather: eating. One of Chicago’s most redeeming qualities is its wide variety of restaurants, and I’ve indulged in a few delicious meals throughout the last few weeks.

Two weeks ago, I went to Uncommon Ground. Uncommon Ground is a (mostly) vegetarian restaurant that has two locations in Chicago, one in Edgewater and another in Lakeview. You might have heard about Uncommon Ground because for the past couple years, it was named the “Greenest Restaurant in America.” They grow their own vegetables on the roof, and most of their ingredients are from local, sustainable sources.

I ordered the White Bean Hash, which was a delicious combination of roasted root vegetables, kale, chihuahua cheese and two poached eggs on top. The hash was served in a piping hot skillet, and the cheese was gooey, melted and warm. 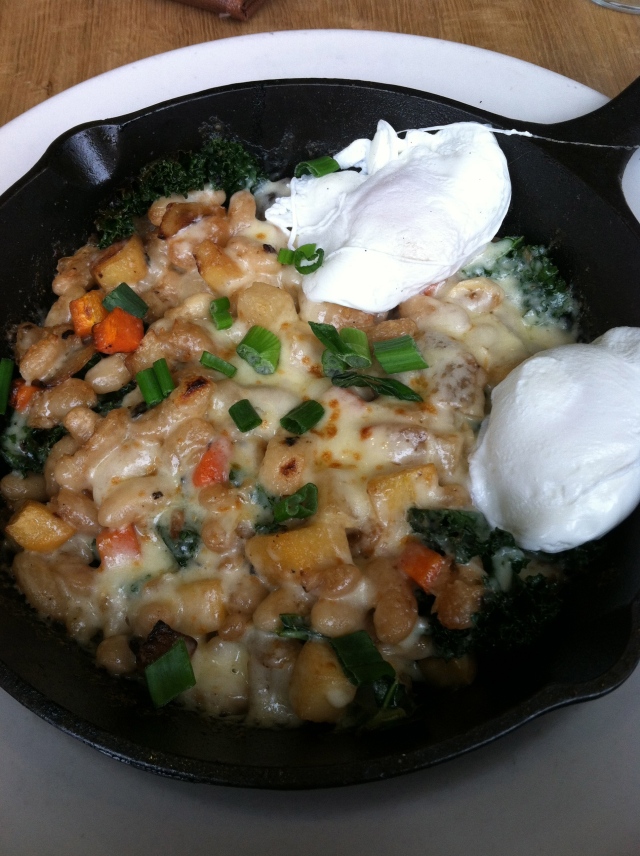 Last weekend I went to Feast in Bucktown (a neighborhood in West Chicago). I was feeling more in the mood for something sweet than savory, so I ordered the the Challah French Toast. Thick slices of eggy bread were dredged in creme anglaise, sprinkled with powdered sugar and layered with a juicy, peach blueberry compote. The bread was dense and creamy, but the second I took a bite it seemed to melt in my mouth.

I know I’ve said this before, but I will say it again…This is one of the best French Toasts I’ve ever eaten in my life. I don’t know why, but French Toast seems to be better in Chicago than other places I’ve tried it…

Tonight, I decided to make a recipe from “Lunch in Paris.” Lentils with white wine, herbs and tomatoes (in French, lentilles au vin blanc) seemed to be the perfect antidote to a cold winter’s night. I loved the way the kitchen smelled as the lentils cooked; the white wine combined with the smell of caramelized onions and tomatoes made my whole apartment seem cozier.

I highly recommend eating the lentils with some good, crusty bread (Elizabeth Bard does too in her book). It made me remember life in France, and even while I was nostalgic, I was happy; I realized that sometimes, our emotions dictate what we eat. We feel stressed, tired or angry, and so we eat in response to those feelings.

But tonight, for the first time in a while, food actually made me feel; it was almost like I was in dialogue with my dinner. I cupped my hands around the bowl and savored every bite. I wasn’t rushing to finish, or worried about what I needed to do next; I was totally and completely in the moment, enjoying my food and appreciating the flavors.

I’ve never underestimated the power of a good meal, but tonight, I realized the satisfaction that comes from making something delicious.

One 16 oz can whole tomatoes, drained and chopped

In a large stockpot, heat the oil over medium heat. Add the onion and carrot and saute for 5 to 10 minutes, until the onion is translucent.

Add the lentils and stir to coat with the oil. Add the broth, tomatoes, wine, bay leaf, an a good grinding of pepper and some Kosher salt. Leave to simmer over low heat with the cover ajar until the lentils are tender and most of the liquid has been absorbed, about 1 hour.

Serve in shallow bowls with a dollop of Greek yogurt, a sprinkling of chopped fresh cilantro, and half a lime for squeezing.

Serves 6 (or 1 with leftovers)