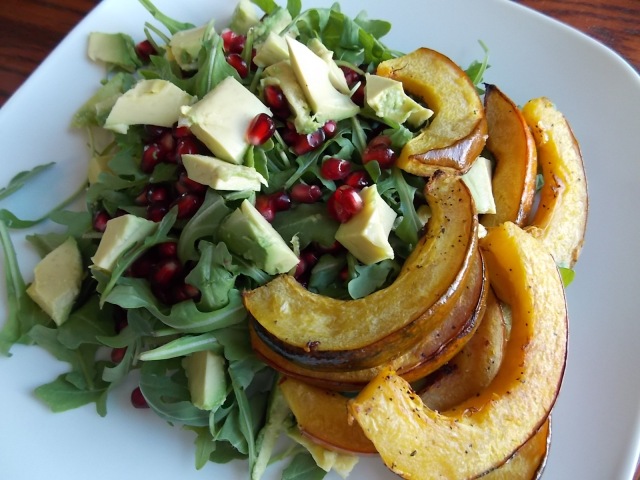 We’ve reached the final countdown to Thanksgiving, and food is on everyone’s mind. Every time I check my email, I’m bombarded with recipes for things like “whipped sweet potatoes with candied ginger” or “challah stuffing with sage and garlic.” Ambitious cooks have started prepping dishes, and die-hard enthusiasts have already decorated the table.

But then, some people are preparing for the holiday in other ways: I went to an exercise class yesterday, and it was more full than usual. Women were lined up against the walls, and there was a palpable intensity to the room. After 55 minutes of exercise, the teacher asked us what we’d rather do: stretch or do pelvic lifts.

“Pelvic lifts!” shouted the girl next to me. “It’s almost Thanksgiving.” Everyone laughed nervously.

While I don’t recommend 200 pelvic lifts as a way to prepare for a holiday feast, I do see her point. I look forward to stuffing myself with food as much as the next person, but it never hurts to conserve a little beforehand. So this week, I bring you two delicious salads–both of which are hearty enough for a meal, but light enough to satisfy a pre-holiday diet.

I made the first salad earlier this week with my friend Stephanie. It was a recreation of a salad that she ate at Owen & Engine–a local restaurant known for its upscale pub fare. The original salad calls for brussels sprouts, edamame, crispy kale, shaved beets and carrots, but we decided to pare it down a little. We kept the crispy kale chips, but we added spicy, oven-roasted chickpeas in place of the other vegetables. We topped the greens with a low-fat buttermilk dressing from 101 Cookbooks, and sprinkled on some blue cheese crumbles.

The best part about the salad was the combination of textures: the crunchy kale chips, the crispy chickpeas, and the soft pieces of blue cheese. I also liked the tangy flavor of the buttermilk and cheese combined with the fresh greens and Indian spices. There’s a lot going on in this salad, but all the ingredients seem to balance one another. We couldn’t believe how full we felt after eating only a few bites.

Yesterday for lunch, I made an autumn squash arugula salad with pomegranate seeds and avocado. I’ve been on a pomegranate kick lately–the fruit seems to be everywhere, and I like mixing the seeds into salads and grains. The original recipe recommended sauteeing the squash in a pan, but I had some time–so I decided to roast it in the oven instead. I loved the caramelized flavor of the squash, juicy pomegranate seeds, and tart arugula. The pomegranate ginger salad dressing is easy to make, and you’ll have leftovers to use the next day.

I’m looking forward to Thanksgiving Day and all the gluttony it brings. But for now, I’m enjoying these salads…I hope you do, too!

Preheat the oven to 400 degrees F. Line a baking sheet with parchment paper and add slices of squash. Toss slices with olive oil, and sprinkle with salt and pepper. Bake squash for around 30 minutes, or until golden brown. If desired, you can add the brown sugar to help the squash caramelize.

Add the arugula to a large bowl with a pinch of salt and pepper. Add in the avocado, pomegranate seeds, and squash pieces. Cover in the pomegranate dressing.

pomegranate ginger vinaigrette
Combine pomegranate juice, vinegar, ground ginger, garlic, salt and pepper in a large bowl and whisk together. Stream in the olive oil while constantly whisking until the dressing comes together. Store in the fridge for up to one week.