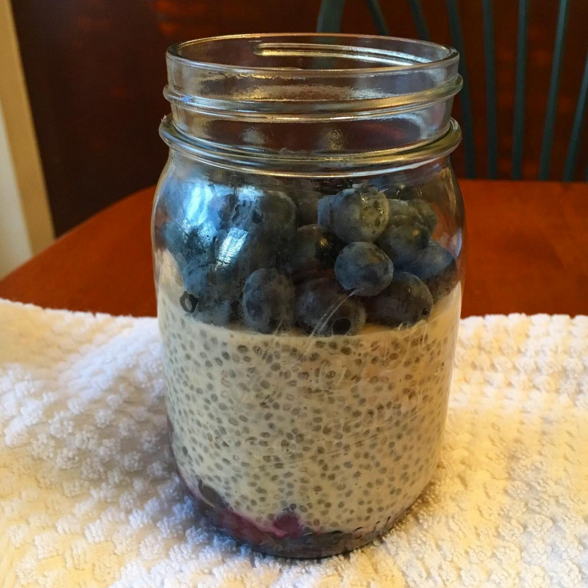 I love breakfasts in a jar. There are few things better than waking up in the morning and having breakfast waiting in the fridge. If you’re in a rush like I’ve been lately, it’s convenient.

It’s also fun. I take my spoon and go from the top layer to the bottom, mixing the ingredients in the jar along the way. When I get to the bottom layer it’s like striking gold. Maybe I’m the only person who gets this excited about breakfast in a jar, but I don’t think so.

You can top this pudding with whatever you want, but I would recommend berries. Bananas would also taste good. I’m thinking about making a peanut butter/chocolate/banana combo soon.

In the meantime, I’ll be enjoying this PB&J version. Here’s a song that’s been stuck in my head since Sunday, when I made these jars for breakfast during the week.

To a small skillet or saucepan, add the blueberries and water. Warm over medium-high heat until bubbling. Then lower heat to medium and cook for 2 minutes – stirring occasionally. Remove from heat and add chia seeds. Stir to combine.

Divide the compote between two Mason jars and place them in the fridge to chill.

In the meantime, add almond and coconut milk to a blender, along with vanilla, maple syrup, and peanut butter. Blend on high to fully combine. Taste and adjust flavors as needed, adding more maple syrup for sweetness, or peanut butter for saltiness.

Add chia seeds and pulse a few times to incorporate, being careful not to blend as you want the chia seeds left whole.

Transfer to a liquid measuring cup or jar (or just set your whole blender in the fridge), and set in the fridge to begin chilling.

Cover well and set in the refrigerator to chill for at least 1-2 hours (preferably overnight), or until chilled through and pudding-like in consistency.

To serve, top with extra peanut butter and fresh blueberries. Will keep covered in the refrigerator for 3-4 days. Enjoy!

Hi! My name is Emily and I'm a writer based in St. Louis. If I was stranded on an island and could request three items of food, they would be pain au chocolat, enchiladas, and Neapolitan pizza.
View all posts by Emily Wasserman →
This entry was posted in Breakfast, Gluten-Free, Uncategorized, Vegetarian and tagged blueberry, blueberry compote, breakfast, chia pudding, chia seeds, compote, healthy breakfast, overnight pudding, Peanut Butter, peanut butter and jelly, quick breakfast. Bookmark the permalink.