Curried Lentils with Yogurt and Cilantro 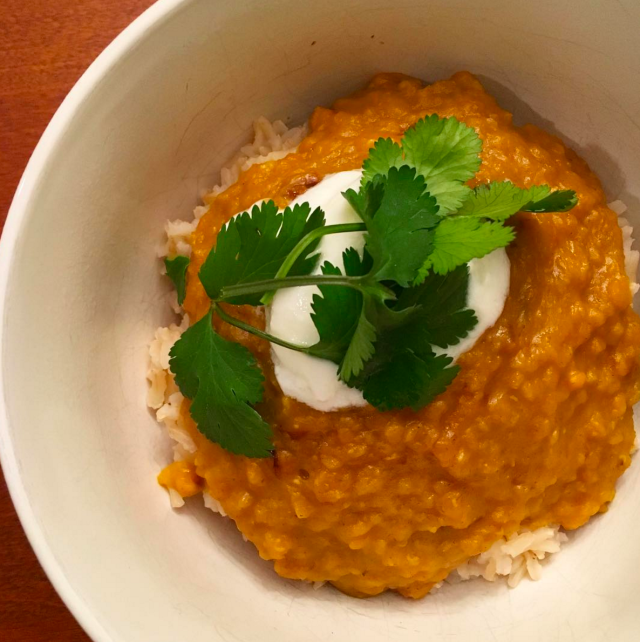 It’s been a rainy couple weeks in St. Louis (with the exception of a few days), and last night was INSANE. On my way home from yoga, the entire highway was covered in water. I felt like I was driving through a bathtub.

By the time I got home, I wanted to eat something comforting and warming. Cue: these lentils. I’ve been cooking a lot of Indian food lately, maybe because of the nasty weather, maybe because I’m obsessed with Indian food. For whatever reason, it happened again last night.

Whenever I make lentils, I think of my friend Tanya. We used to cook together sometimes when we both lived in D.C., and I remember her telling me that her Indian mother encouraged her to make simple dinners for herself every night. Even if it was only lentils, she said, it would be healthier than eating out all the time. Those words stuck with me.

So did some of Tanya’s cooking advice. Once, when we made chili, I panicked because she was eyeballing all the spices instead of using exact measurements. “I usually just improvise when I cook,” is what she said. Now, I’m more or less the same way.

I use the recipe as a guide, but if I feel like adding more spice, I do. I measure by touch and instinct. I’ve found that cooking this way does two things: It takes the stress out of following a recipe line-by-line, and it surprises me. Every time I taste the end product, it’s better than I expected it to be.

ANYWAY. I highly recommend that you make these lentils as soon as possible. They’re delicious on their own, but they also taste mighty fine with a dollop of yogurt and a sprig or two of cilantro.

Here’s a recommended listening track for when you eat your lentils. It’s improvisational, spicy, and reassuring, all rolled into one. Not many songs accomplish that.

Curried Lentils with Yogurt and Cilantro (slightly adapted from Food52)

In a large saucepan over medium heat, warm the ghee. Add the ginger, garlic, shallot (or onion), coriander, cumin, and turmeric and cook, stirring now and then, until the vegetables are softened and the spices are very fragrant, about 10 minutes.

Add the lentils, coconut milk, and 2 tsp kosher salt, then fill the empty coconut-milk can with water and add it to the saucepan. It will look like a lot of liquid, but the lentils will absorb it as they cook. Stir everything together, turn the heat to high, and bring the mixture to a boil. Turn the heat to low and let the lentils simmer, stirring now and then, until they’re completely soft, about 20 minutes. Season to taste with salt.

Serve the lentils hot over rice. Top each serving with a spoonful of yogurt and a sprinkle of cilantro. Enjoy!

Hi! My name is Emily and I'm a writer based in St. Louis. If I was stranded on an island and could request three items of food, they would be pain au chocolat, enchiladas, and Neapolitan pizza.
View all posts by Emily Wasserman →
This entry was posted in Dinner, Uncategorized, Vegetarian and tagged basmati rice, cilantro, curried lentils, healthy, healthy dinner, Indian cooking, indian cuisine, indian food, Lentils, red lentils, vegetarian, vegetarian dinner, yogurt. Bookmark the permalink.