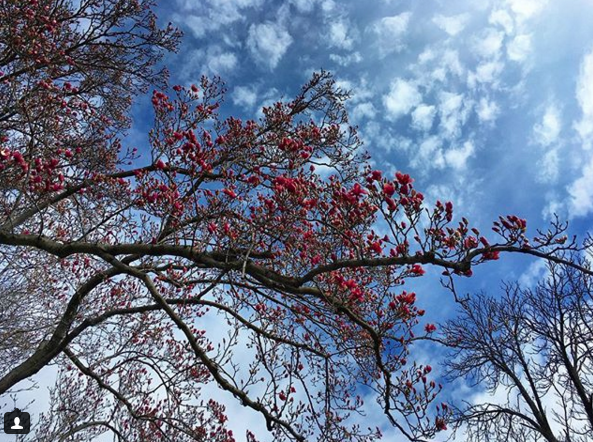 I have this thing where I never remember Jewish holidays. The only reason I knew it was Passover this week is because my best friend Rachel came into town to celebrate with her family. Sometimes I think if it weren’t for her, I’d never remember them.

I’m not very religious and so left up to my own devices, I probably wouldn’t celebrate Passover at all. But now that I’m back in town and most of my family is here, I get roped into celebrating. Last night I had a seder, or a Passover service/meal, with my grandparents, my mom, and my sister.

We had some lively debate at the dinner table because my grandma said she didn’t believe the story of Passover and didn’t feel like celebrating, and my mom argued in favor of accepting the story verbatim. There’s never a dull moment at our seders.

Today I’m going to take it easy before I meet Rachel and my boyfriend for dinner. I’m also planning on making a loaf of carrot cake bread because I’ve been craving it lately. I keep seeing pictures of carrot cake everywhere for Easter and it’s making me want to bake something ASAP. I also satisfied my craving Friday at one of my favorite local bakeries (more on that later).

In a semi-shameless plug, I had my first print article published this week and I am pretty excited about it. It’s a Q&A with Lynn and Martin Weber, my friends who own Edelbrand Pure Distilling. If you’re in St. Louis you can pick up a print version of the article at most food-related venues. If you’re not, check out a teaser below.

Just had my first print article published and I’m feeling mighty fine. Pick up the April issue of @feastmag to read the rest! pic.twitter.com/iomlZw6Fp7

A story about a French waiter getting fired in Canada for being French got a lot of air time this week. Apparently the waiter was rude to customers, which led to him getting the boot. Then he filed a complaint against the restaurant that fired him and said he was just being French. You can read more about the situation here.

I generally respect The New York Times’ reporting but sometimes, they drop the ball. I thought it was funny earlier this week when the newspaper published a story about French people being the new optimists the same day French civil servants and railway workers went on strike against President Macron’s new reforms. You can read the story (in French) in French Morning.

I really enjoyed this story about a Missouri honey maker in the latest issue of Feast Magazine. Giofre Apiaries, which is located about 20 minutes away from Columbia, Missouri, is fighting the global honeybee crisis by running hives and educating consumers about the issue. They also make delicious honey ice cream and sell it at local shops. I need to pick up a pint soon. You can read more about their work here.

When you’re a food writer and you take an extreme stance against one food, be prepared for backlash. That’s what happened earlier this week to Tim Carman, the food critic for The Washington Post. He wrote an article saying that bacon is over-used, which probably has some truth to it. Unsurprisingly, bacon loyalists were PISSED. Check out the story for Carman’s take on the situation.

Have I mentioned how much I love Jeff Goldblum? Probably. I find him so fascinating as an actor and human being. I think we’re kindred spirits. I spent waaay too much time watching his videos Friday afternoon after I read this story in Indiewire.

Sugaree is one of my favorite bakeries in St. Louis. I hardly ever go though because they’re only open for retail on Friday and Saturday, and I don’t live close to where they’re located. I was in the neighborhood Friday though so I decided to stop by to get some dessert. I bought a container of their carrot cake cupcakes, which came in the cutest egg container. I shared them with my boyfriend but I could have eaten them all myself.

Last but certainly not least, I enjoyed reading this story about food writers covering chefs who have been accused or convicted of gendered violence. The story initially focuses on Texas food writers who either have or haven’t covered Chef Paul Qui since he was accused of domestic violence against his former girlfriend. Then it makes the very good point that media, including food writers, can’t exist in silos during the #MeToo movement. Yeah, we already knew that to some extent. But it’s always a good reminder that food, politics, and, most importantly, ethics, are intertwined.

Enjoy your week! Here’s a song to get you started. It comes from Kacey Musgraves’ new album (I’m obsessed).

1 Response to Dimanche (That Means Sunday)