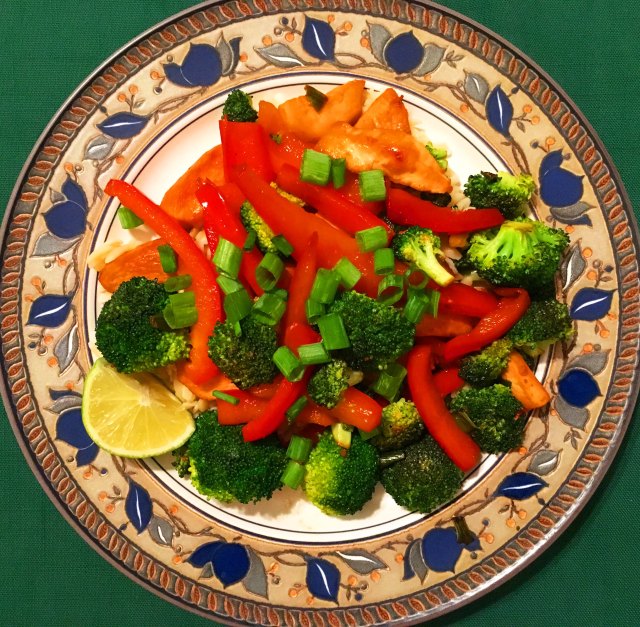 Friday nights are usually hit or miss when it comes to cooking. Sometimes I have the time and energy to make a home cooked meal, but even if I do, I want it to be quick and simple.

Which brings me to this chicken and broccoli stir fry. I made up the recipe Friday night when it was seven o’clock and my boyfriend and I didn’t want to go out, but we still wanted to eat dinner. Also we wanted it to be healthy because we’ve been eating a lot of ice cream and cookies lately (honestly, when am I not eating ice cream and cookies?).

I’ve included a recipe below but honestly, it was one of those touch and go situations where I just threw a bunch of things in a skillet and hoped it would taste okay in the end. Sometimes those end up being the best kind of dinners; other times it ends up like charcoal. Lucky for me, the former prevailed here.

I have a couple stir fry tips that I learned from cooking this dish on Friday. The first one I remembered when it was too late: Freeze the chicken before you cut it. I didn’t really have time to freeze it anyway because we wanted to eat quickly, but if you’re planning ahead and you know you’re going to make the dish in a few hours, I would put the breasts in the freezer. It will make them much easier to slice later. You don’t have to defrost them when you’re ready to cook, you can just throw them into the skillet.

My other tip is to be careful with the oil. You want a fair amount because otherwise, the chicken and veggies won’t cook the way you want them to. But you don’t want so much oil that everything gets greasy or it’s flying all over your kitchen. Be generous but not too generous.

If you want to add different vegetables, feel free. I chose broccoli because I hardly ever eat it but I like how it tastes in stir fry and when it’s steamed. My boyfriend likes red peppers and onion so I added those, too.

This is the perfect meal to make on a weekday or weekend night when you’re short on time and you want a delicious, healthy dinner. It keeps well for a couple days so you can eat the leftovers for lunch or dinner. I served mine over orzo but you can definitely sub in brown or white rice. The stir fry would also taste good over quinoa.

Here’s a song to get you started on your stir fry journey. I heard it in a movie I watched over the weekend, “Beautiful Girls,” which I’d recommend if you’re into 90s films with an all-star cast and funny, self-deprecating characters.

Heat the olive oil over medium high heat. Add the garlic and sauté it for a few minutes until it browns slightly. Add the chicken and sauté until both sides of chicken are golden brown and the pink is gone from the center, about five minutes. Remove the chicken from the pan and set aside.

In the same pan, add the vegetables, half the chopped scallion, soy sauce, and sesame oil. Stir the veggies and move them around the pan so they cook evenly. Once the vegetables are tender and cooked through, add the chicken back into the pan. Warm for a couple minutes.

Remove the pan from the heat and squeeze the lime juice on top. Stir to distribute the juice. Serve the stir fry over orzo with a wedge of lime and a sprinkle of chopped scallions. Enjoy!