A year and a half ago after the election (it feels like so much longer), I told everyone that I was going to flee to Canada. There was a flight leaving for Toronto next to my flight back to St. Louis and I joked that I was going to sneak onto the plane. I also had friends who “escaped” to Montréal in the days following the election and I was jealous. I wanted to get away from the political madness and see cities that I’d only heard about. It wasn’t until this past week that I finally did.

I went to Vancouver about ten years ago but I’d never been to eastern Canada. The two are completely different. Vancouver has more of a Pacific Northwest vibe, similar to Seattle and Portland. Toronto and Montréal have more of a metropolitan feel. Toronto in a lot of ways feels like Chicago, and Montréal reminds me of Europe. There are pros and cons to all three cities.

One of the biggest pros of Toronto and Montréal is the food. I was in Toronto for my friend Allison’s wedding but I managed to find times to explore the city and try some delicious food. In Montréal, I was all by myself so I spent most of the time scoping out good places to eat and shop.

I’ve included a few of my favorite places in a roundup below. 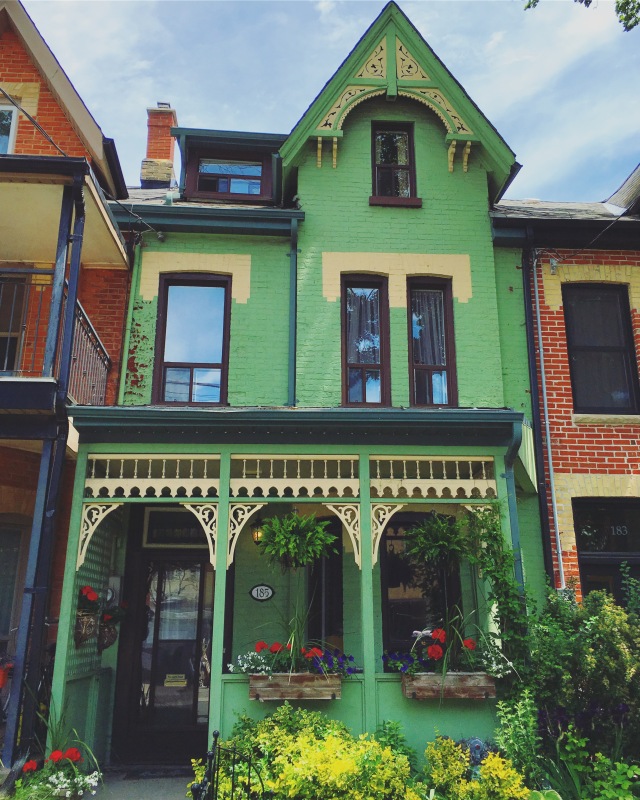 Blackbird Baking Co. is a magical place where every pastry and loaf of bread you’ve ever dreamed of sits on shelves, waiting for you to devour them. I had a hard time narrowing down my choices but I finally settled on this chocolate poppyseed knot. Part-doughnut, part-pastry, part-heaven, is the only way I can describe it. 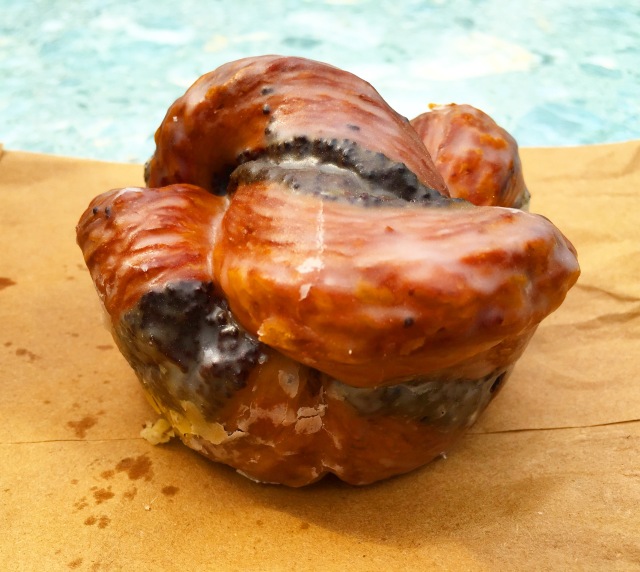 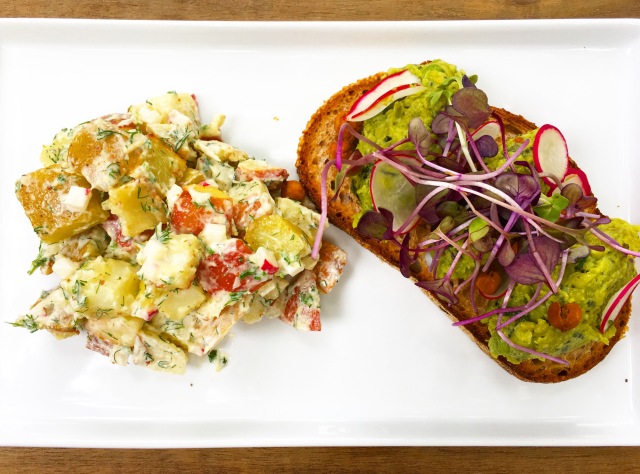 When you’re strolling around the Kensington Market neighborhood, stop by FIKA Cafe for coffee and lunch. The Swedish-inspired cafe specializes in toasts and pastries. I got the smashed pea and mint toast with a side of the best potato salad I’ve ever tasted. I don’t even like potato salad that much but this one sold me.

I broke my no-waiting-in-line rule for Bang Bang Ice Cream & Bakery but it was SO worth it. The ice cream shop lets you create your own ice cream sandwich based on flavors it has on rotation. I got two blueberry cookies with caramel corn ice cream in between and it was heavenly.

If you get hungry browsing Queen Street West, stop by Soufi’s for lunch or a quick snack. I got flatbread with labneh and mint and Balouza, or Syrian pudding with pistachios. The restaurant also has good coffee. I got mine with some orange blossom water. 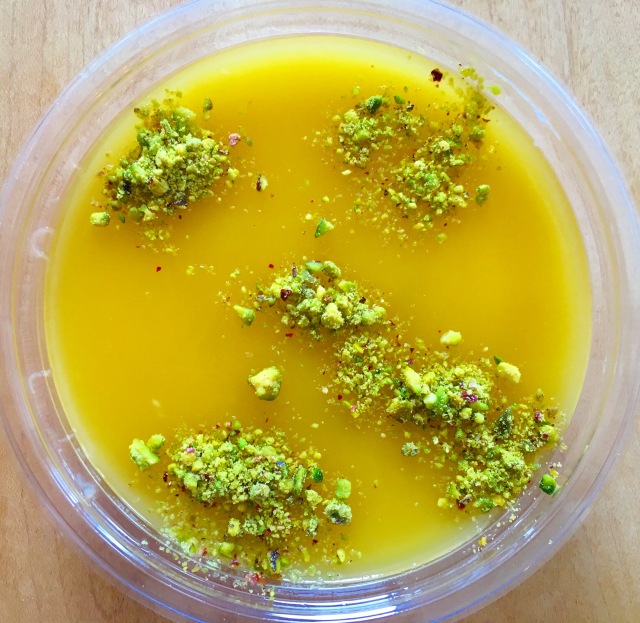 I stopped at Larry’s my first night in Montréal. I hadn’t eaten all day and I was new in town, so it felt a little like showing up to a friend’s house and hoping that they would feed you. Luckily, Larry’s obliged. I got a cherry blossom cocktail recommended by the bartender and a few small plates including Jerusalem artichokes with za’atar, honey-glazed carrots, and strawberry shortcake for dessert. It was a perfect introduction to Montréal food. 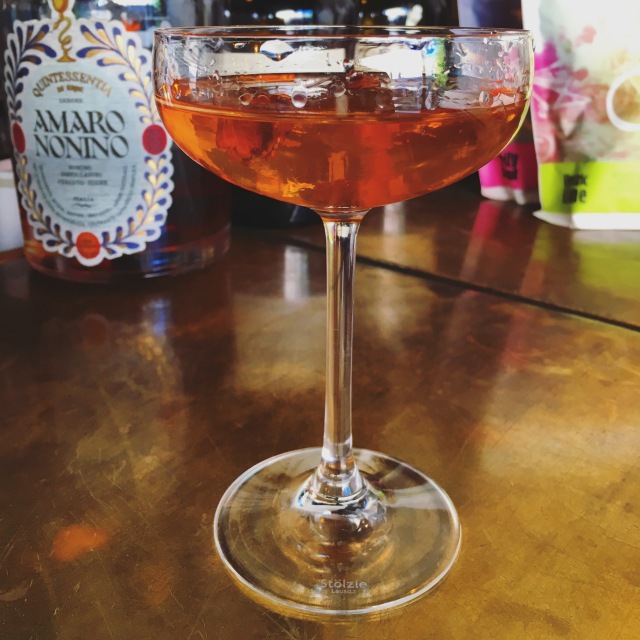 For forward-looking Canadian cuisine, head to Manitoba. The restaurant serves dishes based on local ingredients. Everything is fresh, flavorful, and immaculately presented. I got sea snails with leeks, smoked egg yolk, and ash, and smoked mussels with tomatoes. They were both delicious. I also enjoyed a conversation in French with my neighbors, an older couple who seemed to find me amusing.

I woke up my first morning in Montréal excited to try an authentic Montréal bagel. I might get some flak for this but I have to say, New York bagels are better. Don’t get me wrong: Montréal bagels are good. They’re just not the chewy, fluffy, halos of goodness that you can get stateside. Still, if you want to try a Montréal bagel head to St-Viateur for the best ones in town.

Le Bilboquet was one of my favorite food spots on this trip. The shop serves French-style ice cream. It took me back to the days when I lived abroad and I’d visit the neighborhood ice cream shop at least once a week. I got the maple syrup flavor and it was divine. 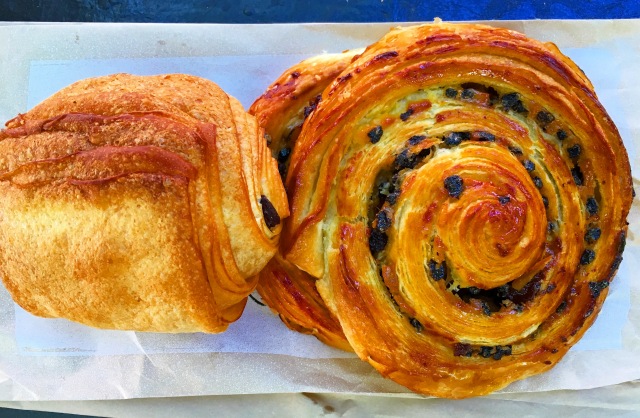 For an authentic French breakfast, look no further than Les Co’Pains d’abord (translated: “Friends first”). I went there two mornings in a row. The first morning I ordered my favorite pastry, a pain aux raisins, and a chocolatine. The second morning I got a “Jésuite,” or Vienna-style pastry with cream and chocolate. All three were delicious and reminded me of pastries that I ate in France. Also, the service was friendly and welcoming. 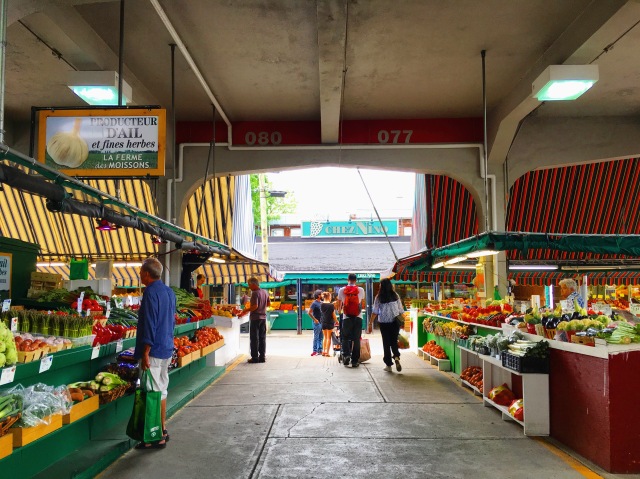 If you love food, I’d highly recommend taking a stroll through Marché Jean-Talon. It’s Montréal’s big farmers’ market and it’s full of every food you can imagine. Browse the produce and stop at the crêperie to get an authentic French crêpe. I ordered one with a Montréal twist, a ham, cheese, apple, and maple syrup crêpe served on a buckwheat crust. I could have eaten two of them in a row.

On the way back from the market, I stopped by Cheskie’s for some Jewish pastries. I’d heard good things about their rugelach and I wasn’t disappointed. I’d recommend the chocolate version, although the poppyseed one was also good.

It was rainy and cold my last night in Montréal so I almost skipped dinner and stayed in. But then I realized I was being lame and I forced myself to go to dinner. I’m glad I chose Restaurant Maison Publique. Located in the Plateau Mont-Royal, the restaurant is more of gastropub. It had a sprawling bar and the menu is on a chalkboard. Don’t let the casual environs fool you though because the food is gourmet. I got mussels with toast, ricotta-filled ravioli with lemon cream sauce, and a rhubarb galette for dessert. The bartender also brought me a small ice cream cone at the end of the meal. 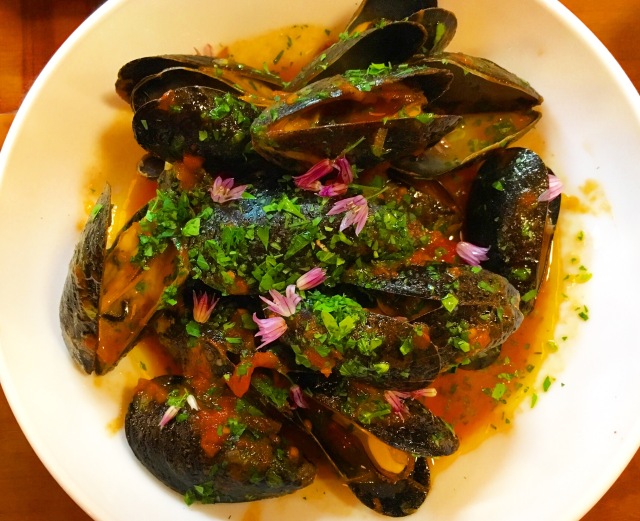 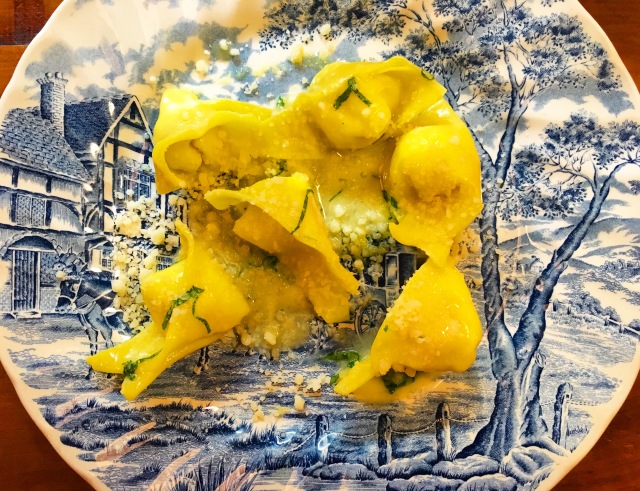 So yeah. Those are my recommendations for Toronto and Montréal. Even though it was great to get away from the U.S. for a week and see new places, it was nice to come home yesterday. After mostly disastrous travel experiences early in the trip, there was a silver lining yesterday when Delta upgraded me to a better seat. I got this view of Manhattan, which is probably the best view I’ll ever have of the city. It reminded me that coming home can be just as sweet, if not sweeter, than leaving.

Here’s a song I heard in Canada. It was the first song that played when I got in a cab to go to my Airbnb in Montréal. Oddly, it was a very fitting theme song for the trip.