This Dimanche comes to you a little late because I just spent half the day trying to teach myself how to can salsa. I got a green tomato delivery from my friend Tony earlier this week and at first, I thought I’d make fried green tomatoes. Then I realized that with the amount of tomatoes I had, it would be better to make a big batch of something that would last.

A friend of mine told me over the weekend that canning is not difficult. This is more or less true, providing you have the right equipment and you are careful with hot glass. Is it time-consuming, though? Yes. Especially if it’s your first time canning, it will take a while to get used to the process and, if you’re like me, make sure you’re not screwing something up. I took my time, watched a few YouTube videos (this one was particularly helpful), and after a few hours, I had jars of fresh green tomato salsa cooling on the counter. I also set a jar aside for immediate use. The salsa was delicious on top of mushroom quesadillas for dinner.

So I guess the moral of this story is, if you’re trying something for the first time, be very patient with yourself and the process. If you’re lucky, you’ll be rewarded with something delicious at the end. Stay tuned for canning tips and a green tomato salsa recipe later this week on the blog.

James Beard Award finalists were announced this week and it reminded me of this story from last year. The story, which is one woman’s account of baking cinnamon rolls from the recipe at the end of Mario Batali’s apology letter last year, is such a good read and brilliantly done. It’s no wonder that it’s a finalist for a Beard Award. Check out the blog post on The Everywhereist.

AFAR always has good travel guides and this road trip one is no exception. The story gives some tips on apps to use for planning road trips, especially for navigation. Check out the article from AFAR.

Speaking of travel… This story about solo female travel is a somewhat shocking and terrifying read, but a necessary one. Read the full story from The New York Times.

I tried the Hoanh Thanh Mi at Mai Lee on Friday night and now it’s my new favorite dish. The soup includes egg noodles, BBQ pork, and the best shrimp wontons in all the land. I’d highly recommend getting a bowl at the restaurant if you’re in or around St. Louis. 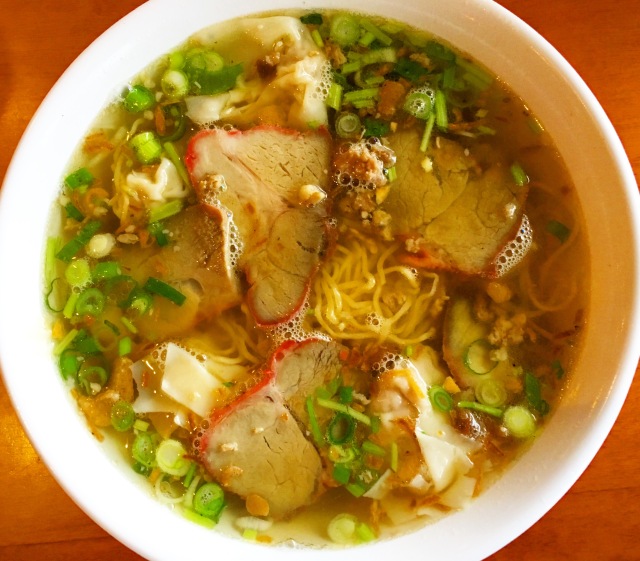 I enjoyed this story from Merriam-Webster about the history of the word “chef.” The word has a different meaning in French, which might shock English speakers but will not surprise native French or French speakers. We use it in English to denote someone who is a skilled cook, but in French it signifies someone who is the boss. Read more about it in this piece from Merriam-Webster.

My old Food and American Literature professor just published a new book about American cuisine and it’s a must-read. Rafia Zafar, a Professor of English, African and American studies, and American Culture Studies at Washington University in St. Louis, pieces together stories about black gastronomy in “Recipes for Respect: African American Meals and Meaning.” Learn more about the book in this Q&A in St. Louis Magazine.

Samin Nosrat released a new set of prints with illustrations from “Salt, Fat, Acid, Heat,” and naturally I want to frame them all. If you’re a fan of Nosrat’s cookbook or Netflix series, I’d highly recommend these prints.

I got very nostalgic reading this interview with the “10 Things I Hate About You Cast.” It also made me miss Heath Ledger. The movie still goes down as one of the greatest of all time. Read the interview with cast members in The New York Times.

Last but certainly not least, I had no idea that Julia Child had a political side but it makes me admire her even more. Apparently Child was disgusted at the Republican Party and an advocate of Planned Parenthood during her lifetime, but many might not remember that because she cultivated an apolitical appearance following the success of her French cookbook and television series. Read more about Child and her politics in this New Yorker piece.