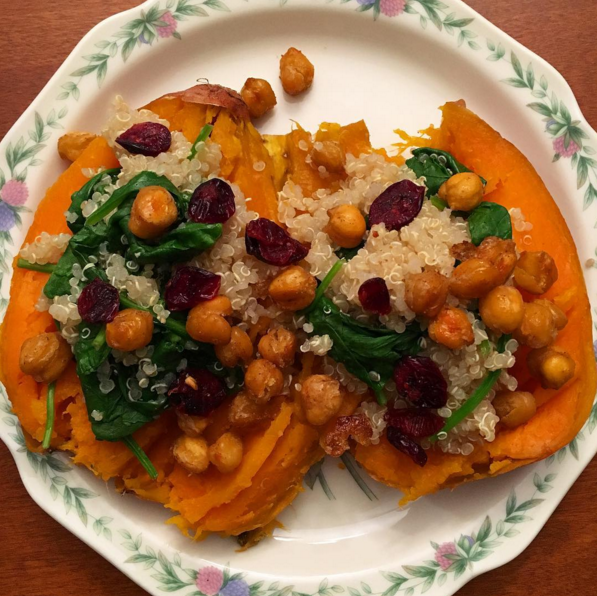 Tonight was the kind of night when I looked around my kitchen, took stock at what I had, and tried to figure out how to combine it into one dinner. I had a sweet potato, and my automatic instinct was to roast it. My second instinct was to douse it in maple syrup, butter and brown sugar, but I suppressed it.

Instead, I opted for a healthier route. I haven’t had crispy chickpeas for a while and was craving them, so I threw some in the oven while the potato was roasting. In the meantime, I made some quinoa and steamed spinach. I combined everything on a plate and sprinkled cranberries on top for sweetness. Golden raisins also would have worked, but I was all out.

My favorite part about this dish is how easy it is to make. Yeah, it takes a while for the sweet potato to cook. It also involves three separate steps. If you’re like me and have little to no patience, you’ll complain the entire time about how hungry you are while everything cooks. Hopefully you’re either alone during all this, or have people who love you around who pretend not to hear.

Once everything cooks, though, it comes together quickly. You can snack on the spiced chickpeas while you wait for the potato to finish.

I had this song stuck in my head the whole time I was making the sweet potatoes. It’s a good distraction from waiting and it has a good message. Every now and again, it’s important to listen to the words: “f*** what they taught ya.”

Loaded Sweet Potato with Spiced Chickpeas (from me, to you)

Preheat the oven to 400 degrees F. Prick a sweet potato multiple times with a fork and wrap in in aluminum foil. Put it in the oven and cook for about an hour, or until tender.

Meanwhile, line a rimmed baking sheet with aluminum foil. Place the rinsed and dried chickpeas on the sheet and toss with olive oil, cumin, paprika, cinnamon and sea salt. Place the sheet in the oven on a different rack from the potato and cook for about 30 minutes, or until crispy. Watch the chickpeas and make sure that they don’t burn.

Combine 1/4 cup quinoa and 1/2 cup water in a medium saucepan. Bring to a boil and then reduce heat to low and simmer, covered, until the quinoa is almost fully cooked. This will take about 10 minutes. Once the quinoa is cooked but there’s still some water left, add the spinach to the saucepan. Cook with the lid on until the spinach turns bright green and absorbs most of the remaining water. Remove from pan from heat and set it aside with the lid tilted.

Once the potato is done cooking, split it in two. Slightly mash down the centers with a fork. Add the quinoa/spinach mixture, spiced chickpeas and cranberries. Enjoy!