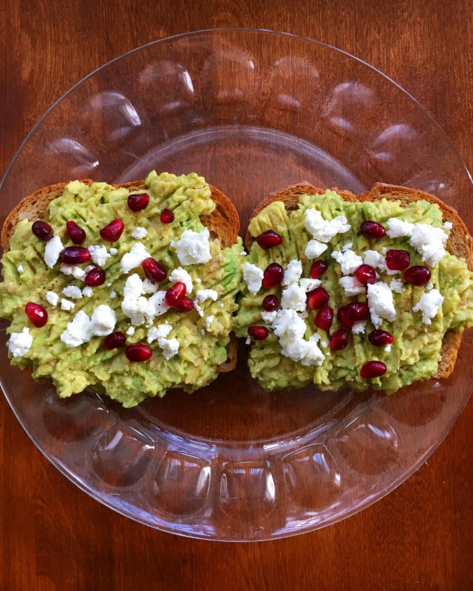 I’m a big proponent of simple avocado toast. I like the way that toasted, crusty bread tastes with soft, smashed avocado on top. It doesn’t need much else, except maybe a poached egg.

Every once in a while, though, I like to switch things up. That’s where this avocado toast with pomegranate seeds and goat cheese comes in.

I saw someone sprinkle pomegranate seeds on avocado on Instagram, and I thought to myself, why don’t I do that? I love both of those things individually and they would probably taste good together.

Then, I decided to add some Baetje Farms goat cheese into the mix. I’ve been raving about this cheese on social media for a few weeks now. My friend LeAnn sent me a New York Times article about the farm earlier this month and I was drawn to the farmer’s story. She used to live in St. Louis, where her dad owned an auto shop.

Then she became a mennonite and started her own goat farm in rural Missouri. Her goat cheese is rated among some of the best in the world.

When I saw it the other day at Whole Foods, I knew it was fate. I love goat cheese but I haven’t found any in the U.S. that rivals the kind I bought in France. When I lived there, I’d go to the farmers’ market on Saturday and buy some fresh goat cheese from a man who raised goats.

It was unlike anything I’d ever tried. The flavor didn’t taste like rubbery American cheese or the hermetically sealed cheese that you get at the grocery store. It was fresh, earthy, and covered in ash. But the ash made the cheese taste better.

I’m happy to say that Baetje Farms’ cheese is just as good as the kind I tried when I lived abroad. Now that I know where it is, I’ll probably be buying it all the time…which will soon become a problem for my bank account.

Meanwhile, here’s a good song to for making avocado toast. I’ve been listening to it a lot lately, even though it gives me a headache. There’s something addictive about that opening beat.

Avocado Toast with Pomegranate Seeds and Goat Cheese (from me, to you)

2 slices of good bread, toasted
1 avocado, peeled and seeded
1/2 a lemon
pinch of salt and pepper
sprinkle of pomegranate seeds
2 tbsp of the best goat cheese you can find, crumbled

Smash the avocado in a bowl with juice from half a lemon and a pinch of salt and pepper. Spread it onto the two pieces of toast so each piece has an even amount. Top with pomegranate seeds, goat cheese and a sprinkle of black pepper. Enjoy!

Hi! My name is Emily and I'm a writer based in St. Louis. If I was stranded on an island and could request three items of food, they would be pain au chocolat, enchiladas, and Neapolitan pizza.
View all posts by Emily Wasserman →
This entry was posted in Lunch, Uncategorized, Vegetarian and tagged avocado, avocado toast, Baetje Farms, goat cheese, local food, pomegranate, pomegranate seeds, toast. Bookmark the permalink.