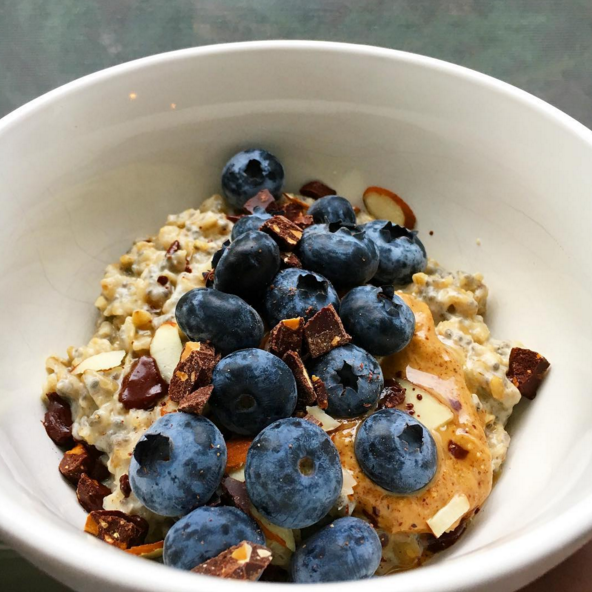 Stop whatever you’re doing and make this vanilla chia oatmeal immediately. I’m not joking. It’s one of the best things I’ve eaten this month, but also, ever.

I’m glad that it’s easy to make so I can repeat it often. Although I probably won’t want to because it’s the type of breakfast that should be saved for special occasions. It tastes more like dessert.

I love Anett Velsberg’s blog. I find lots of recipe inspiration there. I forgot about how much I liked her breakfast recipes until I saw a picture of one on Instagram (where I spend roughly 95% of my time). Whoa, I said. Creamy vanilla oats with blueberries? DONE.

I happened to have a whole pint of blueberries in the fridge, and two squares of dark chocolate that were crying out to be used. I also had a healthy supply of almond butter and almonds, so the time was ripe.

“This smells really good,” I told my mom, who happened to be in the kitchen. “I know,” she said, “I can smell it from over here.” This is the kind of oatmeal that’s a delight for all the senses. Sweet vanilla with dark chocolate, crunchy almonds, tart blueberries, a splash of maple syrup and salty almond butter…I’m making myself want another bowl by writing this.

Anyway. Anett usually puts her recipes in grams, so I converted ingredients to cups to make it easier for American cooks. I need to invest in a scale, but for now, I’m relying on cups.

In other news, I saw 20th Century Women the other day and I loved it. It starts off slow, but then it picks up speed toward the middle. The acting is phenomenal. I liked that I could relate to every female character, even though they were all different ages and didn’t have a lot in common.

I also liked the music in the movie. Here’s one of my favorite songs.

Place the oats and almond milk in a pot over high heat and add the salt, vanilla and and maple syrup. Bring to a boil and then turn down the heat to a simmer. Cook for 4-5 minutes, then stir in the chia seeds and remove from heat. Put a lid on the pot and let it sit for another 2-3 minutes. Take off the lid and stir the oatmeal, then transfer it to a bowl and top with almond butter, blueberries, almonds and dark chocolate. Enjoy!

Hi! My name is Emily and I'm a writer based in St. Louis. If I was stranded on an island and could request three items of food, they would be pain au chocolat, enchiladas, and Neapolitan pizza.
View all posts by Emily Wasserman →
This entry was posted in Uncategorized, Vegan, Vegetarian and tagged almond, almond butter, almonds, blueberries, blueberry, breakfast, chia, chia seeds, Chocolate, dark chocolate, maple syrup, oatmeal, oats, porridge, vanilla chia oatmeal, vanilla oatmeal. Bookmark the permalink.