The corner of Tower Grove Ave and McRee is a dangerous one for me, not so much because of neighborhood safety but because of what it does to my wallet. Union Loafers, a bread baker, is on one side of the street, and La Patisserie Chouquette, my favorite bakery in St. Louis, is on the other. Today was payday Friday, so I decided to treat myself to both.

First stop was Union Loafers. They were HOPPIN. I’d never been inside the cafe before but there were people spilling out the door at noon. The space is small and so if you show up for lunch, there will probably be a short wait. But it’s worth it.

Union Loafers’ bread is, in a word, amazing. I haven’t had truly delicious bread like this since I was in San Francisco and I bought a whole loaf from Tartine and ate it at my Airbnb after dinner. Union Loafers’ bread is springy, chewy, sturdy and flavorful. It is everything that good bread should be without being boastful. It could be a meal by itself.

I found myself holding one last crumb between my fingers when I finished my turkey sandwich. It made me sad, because the experience of eating the bread was almost over. It made me doubly sad because I think that too often, I settle for substandard bread. We’ve all done it. Once you taste the good stuff, though, there’s no going back. 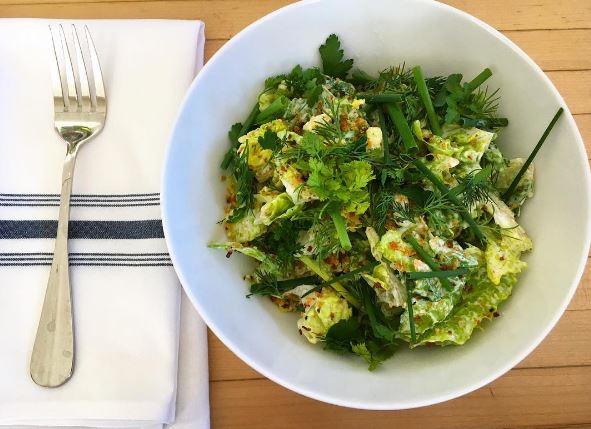 I left Union Loafers feeling good. I didn’t even really *need* dessert. But then, I saw La Patisserie Chouquette and all bets were off. I told myself I’d go in for a lone macaron. Ha. Ha ha.

I ended up with a lemon lavender eclair. Lemon and lavender is one of my favorite flavor combinations. I liked the citrus tang of the lemon cream inside the croissant and the subtlety of the lavender. The dried lavender on top of the eclair was a nice touch. It made me feel like I was roaming through a lavender field in Provence…until I checked my phone and realized that I needed to get back to work.

Suffice to say, lunch today was a great escape. I know I’ll be back to Union Loafers and La Patisserie Chouquette soon. Trying to stay away is futile.

Here’s a song I’ve been jamming out to this afternoon at my desk. It’s good for Fridays, weekends, being stuck in traffic, or pretty much whenever.

Hi! My name is Emily and I'm a writer based in St. Louis. If I was stranded on an island and could request three items of food, they would be pain au chocolat, enchiladas, and Neapolitan pizza.
View all posts by Emily Wasserman →
This entry was posted in Restaurant Reviews, Uncategorized and tagged bakery, bread, french food, french pastry, La Patisserie Choquette, St. Louis bakeries, St. Louis dining, St. Louis food, Union Loafers. Bookmark the permalink.