I bought some strawberries and rhubarb at the Tower Grove Farmers’ Market on Saturday and I debated about what to make with them. I thought about muffins or hand pies. Then, I thought of breakfast crisp.

One of my favorite things to do with strawberries is to roast them in the oven. They break down and become slightly sweeter. I could drink the juice with a straw.

I stopped short of doing that, though. To make this crisp, I cut up some rhubarb and strawberries and sprinkled some oats mixed with brown sugar, flour, and coconut oil on top. You could use butter in place of coconut oil–that’s what most crisps do. But I would *highly* recommend taking a chance on the coconut oil. The nutty coconut pairs well with the strawberries and balances out the tart rhubarb. 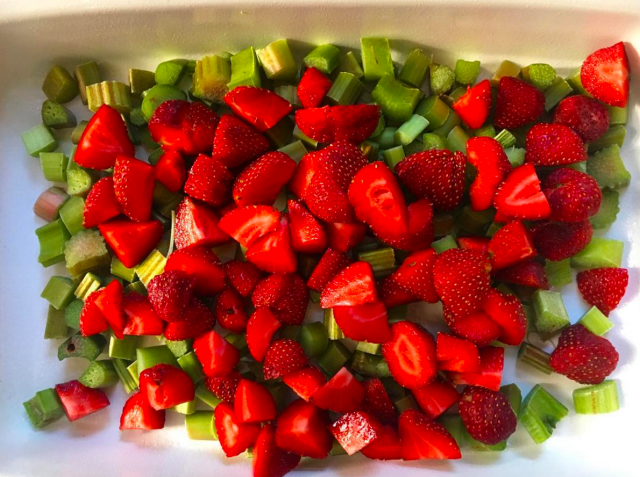 A great perk of making this recipe is how your kitchen will smell as the crisp bakes. It comes second only to banana bread, or a hardware store. I didn’t realize it until Sunday when I helped my sister buy moving boxes, but stores like Lowe’s smell really, really good. I’m not sure why because essentially I’m smelling cardboard, paint, and wood dust. But I guess that has its allure. ANYWAY. Make this crisp as soon as possible. It’s super easy and it’s a great way to use up fresh strawberries and rhubarb before they go bad (or you eat them all). I served it with nonfat Greek yogurt and some maple syrup, because I like my breakfasts extra sweet. You could get creative with toppings though and use crème fraîche or even whipped cream.

Here’s a song that reminds me of this crisp. I heard it in a coffee shop over the weekend while I was finishing the third Elena Ferrante novel.

Strawberry Rhubarb Breakfast Crisp (from me, to you)

Preheat your oven to 375 degrees F. Spray a large baking dish with baking spray and set aside. Place the rhubarb, strawberries, flour, and brown sugar in the dish and squeeze the lemon juice on top. Toss the ingredients until the fruit is coated in flour and sugar.

In a separate bowl, make the crumble topping. Combine the rolled oats, flour, almonds, brown sugar, and salt. Then, using your fingers, work in the coconut oil until the mixture sticks together. Spread it evenly on the fruit in the baking dish.

Bake the crisp for about 40-45 minutes, or until the fruit is bubbly and the top is golden brown. Serve with Greek yogurt and maple syrup, or toppings of your choice. Enjoy!

Hi! My name is Emily and I'm a writer based in St. Louis. If I was stranded on an island and could request three items of food, they would be pain au chocolat, enchiladas, and Neapolitan pizza.
View all posts by Emily Wasserman →
This entry was posted in Breakfast, Uncategorized, Vegan and tagged breakfast crisp, crisp, farmer's market, fruit crisp, local produce, oats, rhubarb, roasted fruit, seasonal produce, strawberry, strawberry rhubarb breakfast crisp, Vegan, vegan breakfast. Bookmark the permalink.