Some places just make you take a deep breath, look around, and realize that everything is right with the world (even though you read wayyy too much news and know that it isn’t). Louisville and Asheville are two of those places.

I flew down to Louisville, Kentucky to visit my friend Lyndsey. Lyndsey and I met in grad school and unfortunately, we don’t get to see each other very often. So earlier this year we planned a trip where I would meet her in her hometown and then we’d drive to Asheville, North Carolina to hike and eat everything. We booked the trip not realizing that it was the same weekend as the solar eclipse.

Louisville is one of the cutest towns I’ve visited in the U.S. When I got there, I realized that I don’t really know the south at all. I’ve been to Charleston but the culture in Louisville is different. People seemed even more laid back and because it’s not as touristy as Charleston, it’s less crowded and commercial. You get the sense that everyone knows each other. It seemed like everywhere I went, Lyndsey spotted someone she knew on the street or in a restaurant.

Friday night, we went to Garage Bar. As the name suggests, it’s in an old garage. We sat on the patio and got basil gimlets. I thought I didn’t like gin and then I tried this drink. It made me a gin believer. I could have drank 10 in a row.

After drinks, we went to Feast BBQ, a local barbecue joint. Everyone at Feast is friendly and the food is delicious. I ordered a pulled pork sandwich and sweet potato fries. Lyndsey and I also split fried pickles with dill sauce, but those didn’t make it to the photo taking stage because we devoured most of them beforehand. 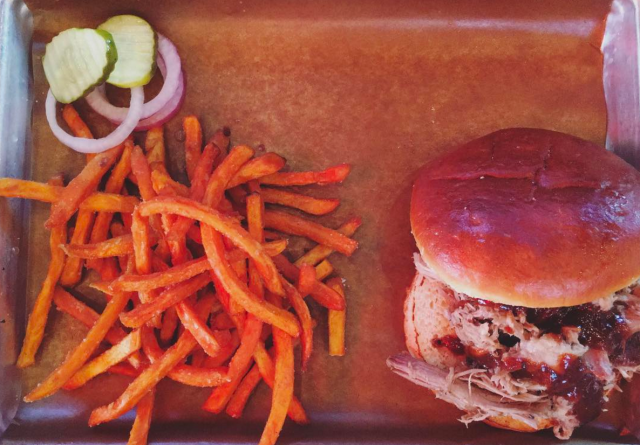 My last day in Louisville, we went to two restaurants that you NEED to go to if you’re ever in the city. First, we went to Please & Thank You for chocolate chip cookies. Lyndsey told me they were the best in town, but she didn’t tell me that they were the best cookies EVER. It was the perfect consistency, soft in the center, slightly crispy around the edges, and still-warm melted chocolate chips in the middle. I’m tearing up writing about it.

After “breakfast,” we had lunch at Con Huevos, which is two storefronts down from Please & Thank You. I ordered the house special, the Huevos Rancheros, and I was blown away. The corn tortillas were soft and warm with refried beans layered in between, the sunny side egg on top was perfectly cooked, and the avocado mousse on the sides paired well with the salsa and beans. My only regret is that I left one bite on my plate.

Friends of mine who have already been to Asheville told me that I’d love it. They described it as a bohemian paradise with amazing food, which is basically my heaven. They weren’t wrong.

The first night, Lyndsey and I went to Chai Pani in downtown Asheville. My expectations were high because I’d read a lot about the restaurant in food publications. It’s gotten great press. 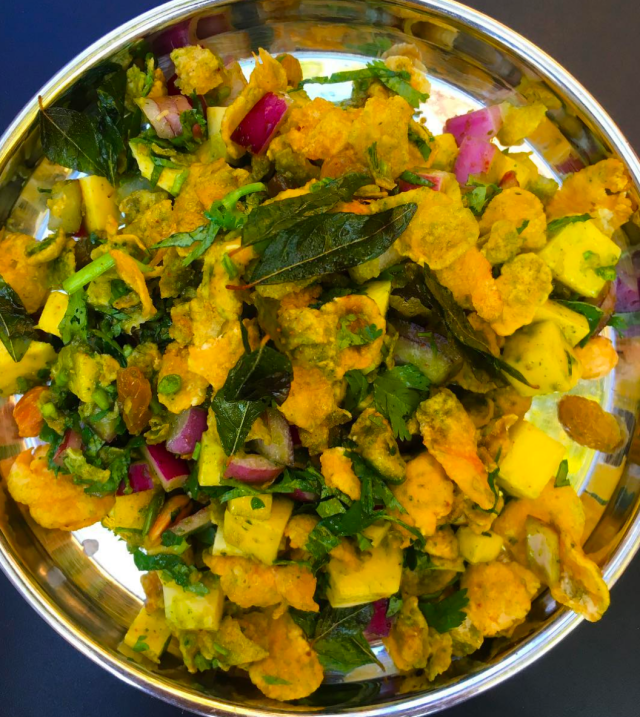 I also ordered the butter chicken thali, which is an Indian meal that comes in small bowls on a large silver platter. I can never decide what to eat first so I usually just turn off my brain and let my heart choose. The waitress came to take my platter away when it looked like I was done but I grabbed the lentils. I didn’t want to waste one bite. 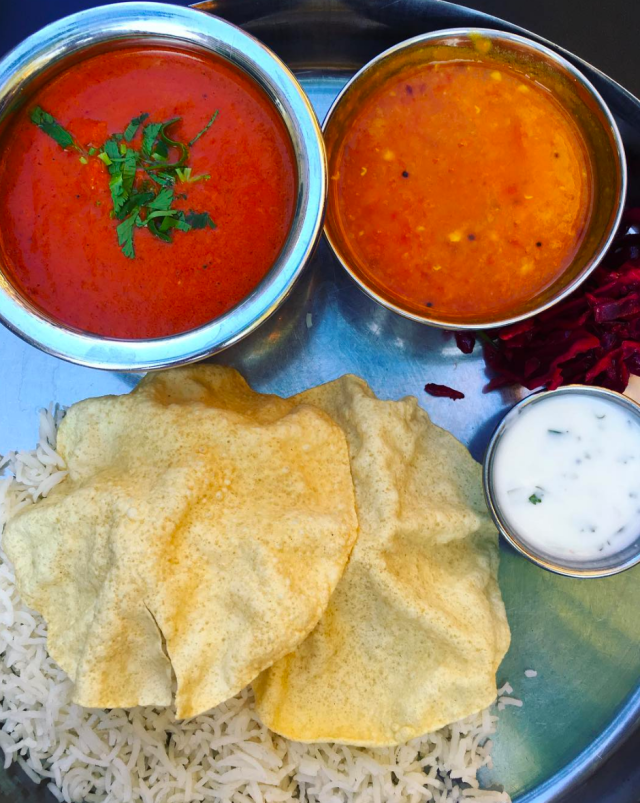 Even though Chai Pani was delicious, the best dinner I had in Asheville was at Plant. I found the restaurant because Lyndsey is a vegetarian and I felt bad dragging her to barbecue places with me all the time. They got great reviews so I figured they would be legit.

Everything at Plant is vegan, which makes one skeptical. I like vegan food but sometimes, I’m too conscious of what I’m missing when I’m eating it.

That didn’t happen once at Plant. The food was so good that I forgot that it was vegan.

When Lyndsey and I were waiting to get into the restaurant, a guy came in and tried to get a table for one. We were about to be seated so I offered to let him sit with us. We snagged a seat on the patio and it was perfect: Asheville cools down a lot at night and it felt good to have a breeze after hiking in the mountains all day.

We ordered a bunch of food for the table, including a hummus plate with pickled radish and za’atar and fried plantains with sour cream and house BBQ sauce. I wanted to take the plantains into a corner and eat them alone.

I ordered the applewood smoked portobello mushroom for a main dish and it was incredible. The slices of mushroom were tender but still chewy, and the millet cake underneath melted in my mouth. Also, that steak sauce…what. is. happening. Even though the three first dishes were amazing, the real star of the meal was dessert. We ordered vegan chocolate peanut butter pie with Butterfinger ice cream and then decided to split a dish of three ice creams. I’ll never forget the pie. It was so rich, creamy, and decadent, and I forced myself to eat it slowly to savor every bite. I’m going to write to the restaurant and try to get the recipe. The pie made me want to quit my life and never leave Asheville.

To balance out all the eating, Lyndsey and I also went on some hikes. I’ve never seen the Blue Ridge or Appalachian mountains and they’re beautiful. The first day, we hiked up Looking Glass Rock. The day of the eclipse, we hiked into the Appalachians and sat at the top of Max Patch. Both of the views were stunning. I wanted to bottle up the air because it smelled so fresh and pure.

I’m going to miss Louisville, Asheville, and the mountains, but I’m sure I’ll be back soon. Here are two songs that reminds me of the trip: I heard the first one in the car on the way back from Max Patch. The second one is an old favorite that I put on as we were driving through the foothills. It features one of my favorite lyrics of all time: “pour me another drink and punch me in the face,” which isn’t very zen but always makes me laugh.

1 Response to Louisville and Asheville