Seattle will always have a special place in my heart. I showed up for the first time a couple years ago to visit one of my best friends from grad school, Stephanie, and my brother. At the time, she had just moved there with her husband and my brother was spending the summer there as an intern.

Times have changed. I’ve moved back to St. Louis from D.C. My brother now lives in Seattle full-time. Steph and her husband bought a house and live in a completely different part of the city. But reassuringly, nothing has changed between us. I have a great time every time I see my brother and Steph. They always make me laugh, they understand my particular genre of crazy, and they appreciate good food. So when I show up to spend time with them in Seattle, it feels a little like coming home.

Also, Seattle itself hasn’t changed much, either. Yeah, there are more Amazon and Microsoft people taking over the city. But Seattle still has the same laid-back vibe and independent spirit.

I did a bunch of things this weekend, one being eating and drinking everything (to no one’s surprise). I’ve included below a roundup of places to visit if you’re ever in the city. It builds on my post from a couple years ago, when I experienced Seattle for the first time and went to different neighborhoods and restaurants. This trip was pretty seafood-heavy, which is good because I don’t often get good seafood in the Midwest.

Without further ado, here are my recommendations:

I was craving ice cream when I got off the light rail in Seattle on Friday afternoon so I asked my brother to meet me at Molly Moon’s. I’ve wanted to try the Capitol Hill scoop shop for years. Friday, my dream came true. I tried almost every flavor before I settled on the oatmeal chocolate chip cookie dough and the Mexican chocolate. I wish I could have another cone right now.

Friday night, I met Steph at a bar she recommended called Canon. It has a speakeasy vibe inside, with bottles stacked against the wall, dim lights, and an old-world feel. I got a cocktail called “First Down 10 to Go,” which is probably the closest I’ll ever get to experiencing football. It had gin, aged vanilla maple, lemon, and egg white, which made the cocktail frothy. I’m not exaggerating when I say that it’s one of the best drinks I’ve ever tried.

My family says I can spot a bakery from a mile away, and they aren’t wrong. In this case, I was waiting for my brother with my mom at our hotel downtown and I spotted Dahlia from across the street. I went over to check out the situation and I was floored. Their rhubarb danish is in the top three pastries I’ve ever had, in the U.S. or abroad. 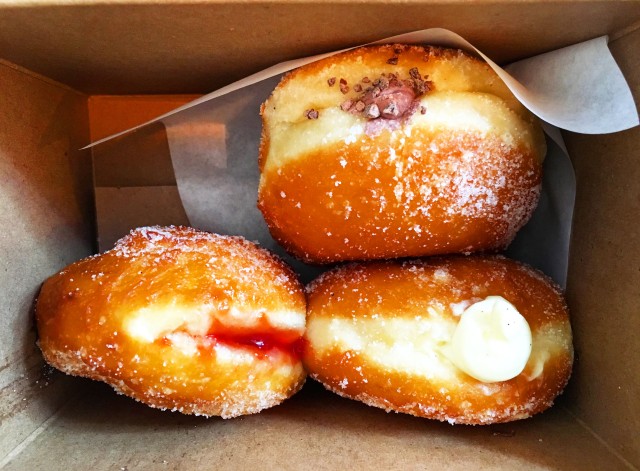 I made it my mission to go to General Porpoise after finding them on Instagram a few months ago. Their doughnuts are OUT. OF. CONTROL. I got the strawberry rhubarb doughnut and it was delicious. You can tell the strawberry rhubarb compote is made with real fruit, not that weird, artificial gel that’s in some jelly doughnuts. The outside is sprinkled with exactly the right amount of sugar.

We decided Saturday to go to Bainbridge Island. You get there by riding a ferry across Puget Sound. We were lucky and we had a beautiful day for the trip. Once we got to Bainbridge, we ate lunch at a restaurant by the water called Doc’s Marina Grill. I was craving fish and chips so I got this basket, which came with coleslaw and a dipping sauce that I want to marry. The fish was crispy, browned, and fried to perfection. I’m tearing up just writing about it. 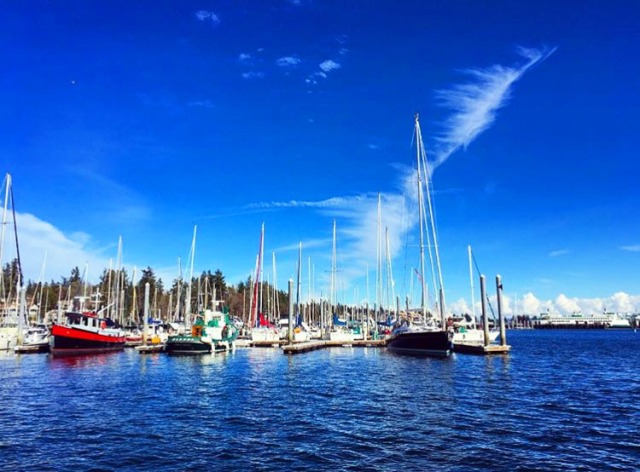 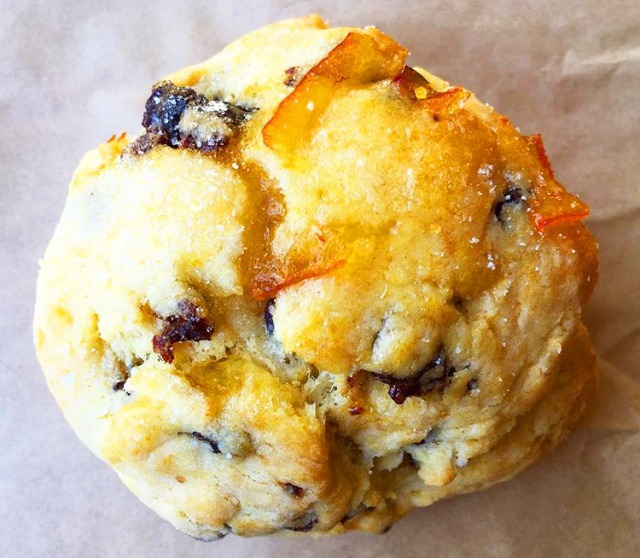 While we were on Bainbridge, I spotted Blackbird Bakery as we walked down the main thoroughfare. We stopped for a snack after lunch and I got this marmalade cream scone with currants. I’d highly recommend stopping in if you’re hungry and want lighter fare while you’re walking around the island.

If you’re craving Thai food, Soi is the place to go. I ordered the jumbo prawns, which came in a delicious, spicy curry sauce and were topped with banana chips. I got sticky rice on the side because I like it better than regular rice. If you go to the restaurant, I’d also recommend ordering a shrub. I got one with honey and it complemented my meal perfectly. 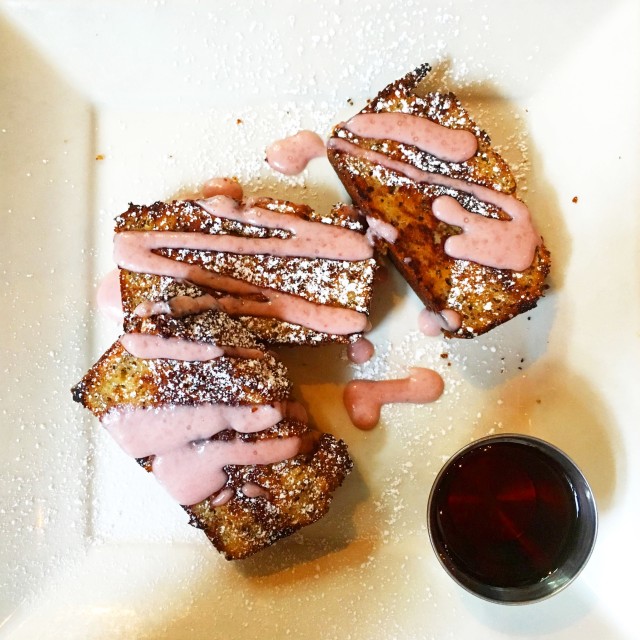 My brother took my mom and I to Portage Bay Cafe on Sunday for brunch. It has a laid-back vibe and inventive twists on classic brunch fare. I got strawberry lemon poppyseed French toast, which is made with the restaurant’s homemade challah and came with a strawberry crème Anglaise drizzle. It was denser than it looked but definitely worth it. I also got a parsnip madeleine that almost overshadowed the French toast. It was soft and moist (I hate that word), a great homage to the classic French pastry.

After a brief detour at hot yoga, we went to browse Ballard Farmers’ Market. I went to Ballard last time I was in Seattle at night and I’d never seen the farmers’ market. It’s a completely different vibe during the day. The Sunday market is huge and there are vendors with fresh, local products. I got Ellenos Greek yogurt with passionfruit and it’s some of the best yogurt I’ve ever had. It was so rich and creamy. Then I got a piece of freshly-made garlic naan with red lentils from Tandoozy. I’m going to be thinking about the naan for months to come. 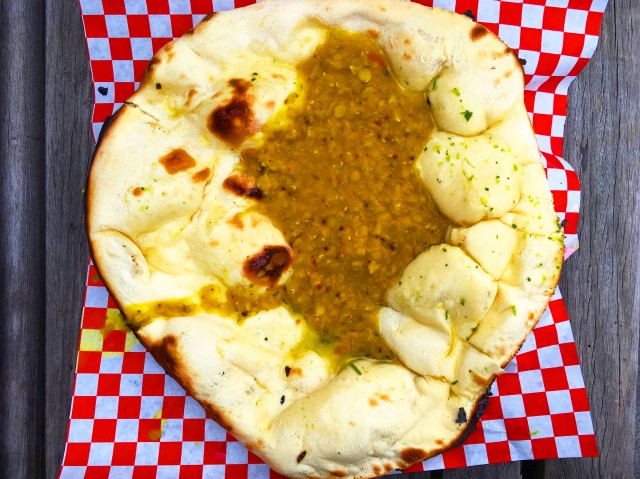 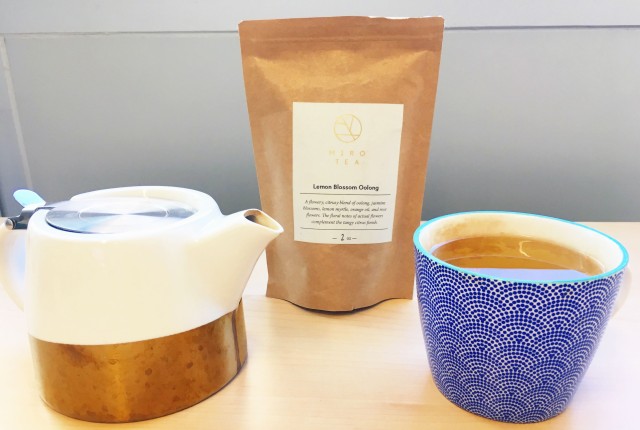 While I was in Ballard, I stopped by Miro for a cup of tea. I took home a bag of the tea I ordered, the lemon blossom oolong. It is so fragrant, warm, and reassuring. It smells like lemon poppyseed cake. I’m going to brew another cup this afternoon. 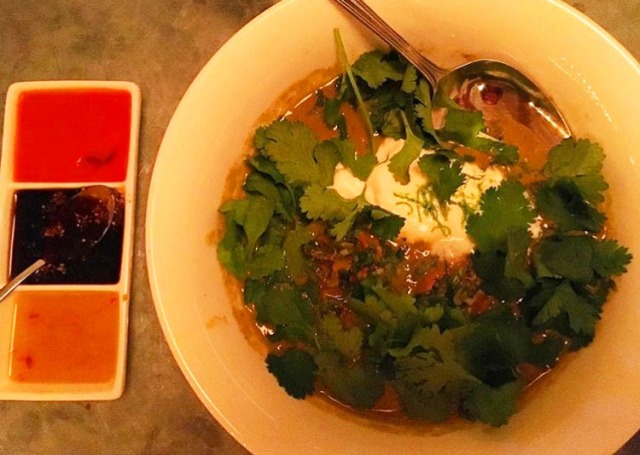 Stateside is one of those restaurants that is so pretty, it almost hurts. I met Steph and her friend from work there for dinner Sunday and I fell in love at first sight. It has whimsical tropical interiors that make you feel like you’re in Hawaii, but you’re not. You’re at the top of a very steep hill in downtown Seattle. We ordered a bunch of dishes but the standouts for me were the goat curry, the crispy Brussels sprouts, and dessert (which I only had two bites of because I was so full after eating the six other dishes). The dessert came with a Thai tuile rose on top that was almost too pretty to eat. 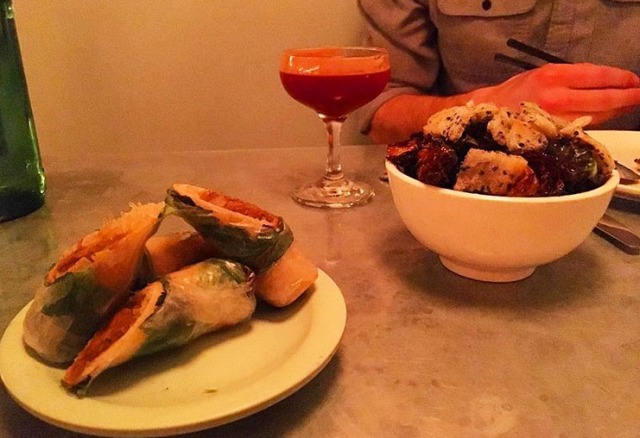 My flight didn’t leave until noon yesterday so I woke up early and walked up a very steep hill to go to Victrola. Steph recommended it and I’m so glad she did. The coffee drinks are made with an expert hand. You can tell by looking at them and by tasting them. I got a cappuccino that I sipped very slowly as I read. The shop was mostly empty at 7 a.m. but it started getting busier as the morning went on.

So yeah. Those are my recommendations for Seattle. It’s not an exhaustive list but I think it will keep you entertained through a long weekend. I can’t wait to visit again soon and go to some other places on my list. 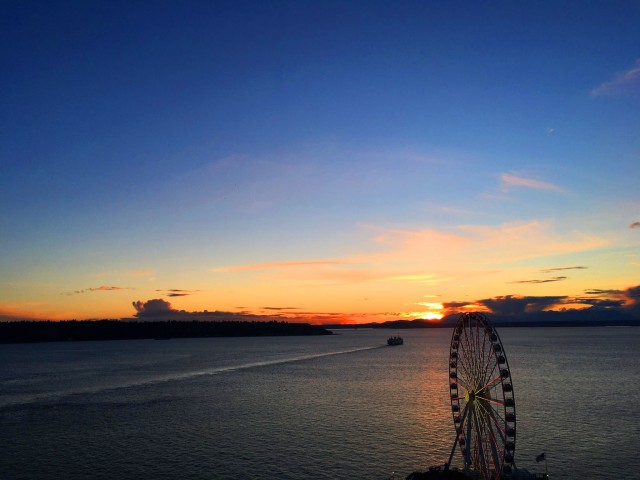