I just got back from Seattle last week after visiting my brother and my friend Steph. It was nice to be on the West Coast again, if only for a few days. I was missing it a lot the other night on my drive home when I saw the sunset at the top of this post. It reminded me that beauty is everywhere, and sometimes in the most unexpected places (like Interstate 64 at rush hour). I almost died taking this picture and I probably should have been arrested, but it was totally worth it.

This week the weather is supposed to get warmer, which I’m excited about. I can’t wait for spring. I’m already planning some long hikes and road trips to make the most of the season.

In the meantime, I’m trying to enjoy the last few days of winter. This involves doughnuts, bottomless cups of lemon oolong tea, and lots of good books.

When I lived in D.C., I used to go to brunch all the time. Then I realized it was a capitalist invention to steal my money. I’ve since toned it down a lot and I only go out to brunch every once in a while. When I do, though, I make sure to hit up good places. I recently wrote about some of the best places to get brunch in St. Louis for less than $10. You can check out my recommendations here.

If you’re visiting Seattle for the first time, check out my food guide to the city. I wrote it after I got back from my trip last week. It includes a link to another one of my posts about Seattle that I wrote after the first time I visited. Between the two you’ll find lots of restaurants, bars, and destinations worth visiting.

So apparently, one guy brought mango, kale, and avocado to the U.S. I didn’t know this until I read an article in the St. Louis Post-Dispatch earlier this week about David Fairchild, a world traveler and botanist who visited more than 50 countries and sent back seeds and cuttings.

I’m loving David Chang’s new Netflix series, “Ugly Delicious.” The first episode annoyed me because it featured a lot of New Yorkers talking about how you can’t find good pizza anywhere except New York. But each subsequent episode is better. I especially like the taco episode and the one about family. So much of food is linked to tradition and I think Chang does a good job showing why some recipes stay with you forever.

Can we talk about KNEAD’s doughnuts? Awesome. It’s no secret that I’m obsessed with their doughnuts. I stopped by the Southampton bakeshop earlier this week because they were advertising a lunch deal: Buy any sandwich and a drink and get a $1 pastry. They didn’t have to convince me. I showed up Wednesday and got a turkey sandwich, grapefruit juniper soda, and a vanilla bean cacao nib doughnut. I always save the doughnut for last because it’s better than anything else in the store. 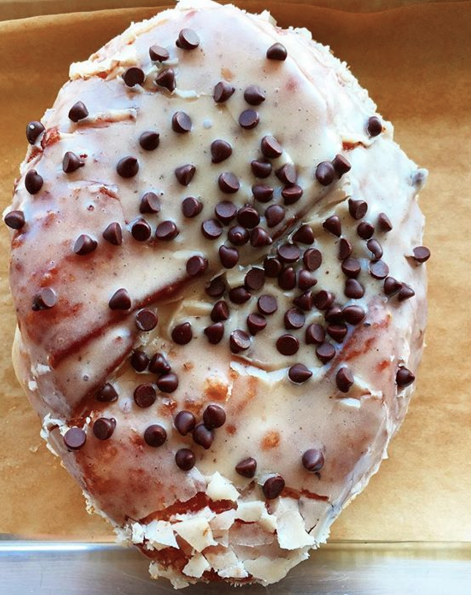 When I was in Seattle, I stopped by a cute little tea shop in Ballard called Miro Tea. It has one of the most extensive tea menus I’ve ever seen with flavors I’ve never heard of. I got a cup of lemon oolong tea and it was so good, I bought a bag of it loose leaf to bring back to St. Louis. I’ve been drinking it at my desk at work all week. It’s so fragrant and comforting.

If you’re a fan of LA Times food critic Jonathan Gold or actor Jeff Goldblum, you’ll love this video. Goldblum goes grocery shopping for ingredients and then makes French soup with Gold. My favorite part of the video besides the actual cooking is how charmed Goldblum is by Ralphs. I wish there was a spinoff series where he goes to different grocery stores with people. I bet it would be hilarious.

Last but certainly not least, there’s a Ruth Bader Ginsburg documentary coming out and I’m losing my sh*t. Justice Ginsburg, or RBG as she’s known fondly among fans, has been my role model for as long as I can remember. I watched this trailer and weeped earlier this week.