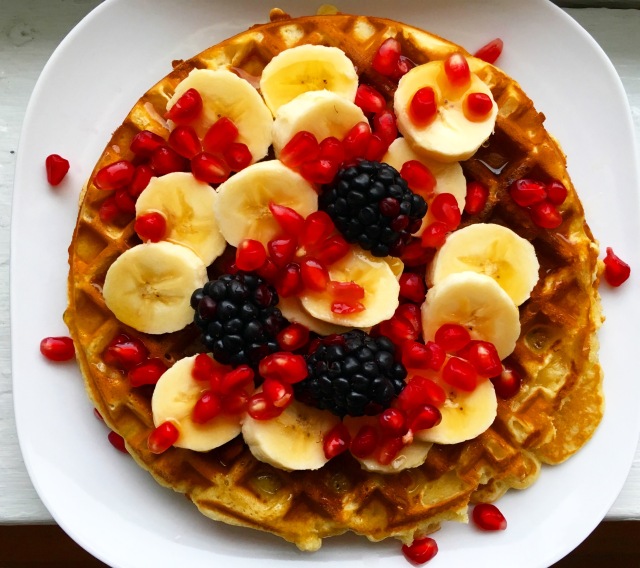 I woke up this morning and my world was completely covered in snow. I was really excited, partly because it looked beautiful and partly because it gave me an excuse to stay in my pajamas an extra couple hours and make these cinnamon vanilla waffles.

Waffles are a breakfast item that I should make more often but I don’t. I think part of it is because of the waffle iron. It’s great while you’re using it but it is a PAIN to clean up. Waffle enthusiasts know what I’m talking about. If you’ve ever almost electrocuted yourself trying to rinse the plates in the sink and twisted paper towels and casually bruised your fingers trying to wipe out the machine, you’ll understand my struggle.

But trust me when I say that these waffles are worth it. They’re good any morning but they’re especially good on a cold winter’s day when you want to stay in your pajamas all day and eat bottomless plates of waffles. They’re warming, spicy, and sweet, and they’re the perfect canvas for anything you want to put on top. I had a bunch of pomegranate seeds, blackberries, and bananas, so I decided to make those my toppings.

If you’re looking for a waffle maker, here’s the one I use. It’s pretty basic and honestly, I’ll probably upgrade soon. The one I have my eye on is easier to clean because you can remove the plates.

Also, this recipe makes two smallish waffles so double it if you want more. I might make this again over the weekend and double or triple the recipe and freeze the leftover waffles so I have them for breakfast next week.

Here’s a song to get you started on your waffle-making journey.

Preheat your waffle iron. I set mine on the highest setting (5) because I like more well-done waffles.

Whisk together the flour, sugar, baking powder, cinnamon, and salt in a large bowl. In a separate bowl, whisk together the milk, vanilla extract, and egg. Add the wet ingredients to the dry ingredients and whisk until they’re combine. Stir slowly but surely; you don’t want to overmix. Mix in the melted butter and stir to combine.

Follow your waffle maker’s directions for cooking. Mine is relatively small so I pour a half cup of batter onto the griddle and then cook it a few minutes until it’s done. Serve with maple syrup, pomegranate seeds, bananas, blackberries, and butter. Enjoy!

Hi! My name is Emily and I'm a writer based in St. Louis. If I was stranded on an island and could request three items of food, they would be pain au chocolat, enchiladas, and Neapolitan pizza.
View all posts by Emily Wasserman →
This entry was posted in Breakfast, Brunch, Uncategorized and tagged breakfast, brunch, cinnamon vanilla waffles, easy breakfast, easy recipes, home cook, home cooking, pomegranate seeds, vegetarian, vegetarian breakfast, waffle, waffles, winter, winter breakfast, winter food. Bookmark the permalink.