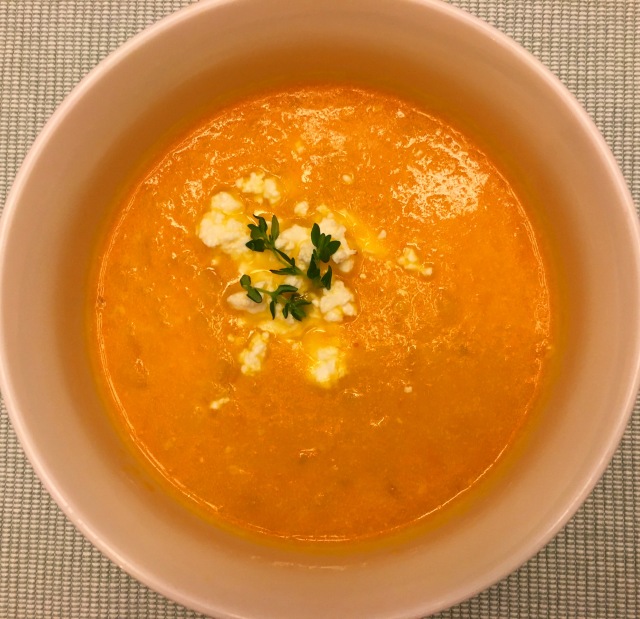 I was in the middle of running errands on Saturday morning when I got a text from my friend Tony. “Do you want some tomatoes?” he asked. I immediately responded yes and raced home to meet him at my apartment, where he delivered a crate full of beautiful yellow tomatoes. For a few minutes, it was almost summer again.

I feel lucky to have met Tony. A few months ago, I wrote a profile of him for St. Louis Magazine‘s Top 32 Dishes to Eat feature. After we spoke on the phone, he brought me some tomatoes to try.

Tony supplies local tomatoes and other produce to some of the best restaurants in town. I’ve started to notice when I’m eating a Tony tomato versus an imported tomato because the former tastes juicy and fresh and the latter tastes…like nothing. Tony gets his tomatoes from MightyVine, a company outside Chicago that grows tomatoes indoors year round.

But anyway, I digress. I got the yellow tomatoes on Saturday and immediately I started thinking about what to make with them. I thought about making tomato sauce again, because that’s what I did the last time Tony brought me tomatoes and it turned out well. But homemade tomato sauce is a process, one that can take hours, so I decided to make something easier instead.

This tomato soup is relatively easy to make and it freezes beautifully, so you can save some for later in the week. It gets a boost from crumbled goat cheese and fresh thyme on top. If you want, you can even add homemade croutons.

My favorite part about the soup is the fresh herbs. Rosemary is my favorite herb and thyme is a close second or third. The smell of rosemary roasting in the oven with the tomatoes is heavenly. It makes me really want pizza. I might make pizza with extra tomatoes and rosemary later this week.

But before I do, I’ll keep enjoying this soup. It’s the perfect thing to make on cold weekends when it feels like winter will never end. It’s comforting, slightly sweet, rich but not cloyingly so, and full of flavor.

A word to the wise: Be generous with the amount of salt that you put into the soup. You might want to hold back, but don’t. The salt enhances the flavor of the tomatoes and the herbs. Keep tasting as you go along so you can adjust sparingly, but don’t be afraid to add more if the soup really needs it.

Here’s a song to get you started on your tomato soup journey.

Preheat the oven to 400 degrees F. Place the tomatoes cut side down in a large greased baking tin. Brush them with one tablespoon of olive oil, sprinkle with 1 tsp of garlic and the rosemary and thyme. Roast the tomatoes for about 30 minutes until the skins are slightly charred and starting to crack. Remove them from the oven and cool the tomatoes slightly. Pull off the skins and then blend the tomatoes in a blender on high until smooth.

Ladle the soup into bowls and top with crumbled goat cheese and fresh thyme. Freeze the leftovers if you’d like. Enjoy!

Hi! My name is Emily and I'm a writer based in St. Louis. If I was stranded on an island and could request three items of food, they would be chocolate croissants, Halloumi and Neapolitan pizza.
View all posts by Emily Wasserman →
This entry was posted in Dinner, Lunch, Uncategorized, Vegetarian and tagged Comfort Food, cook, cooking, delicious, dinner, home cook, home cooking, homemade, lunch, MightyVine, soup, tomato, tomato soup, tomatoes, Tony White, vegetarian, winter food, winter recipes. Bookmark the permalink.

2 Responses to Tomato Soup with Goat Cheese and Thyme