Posted on December 2, 2019 by Emily Wasserman 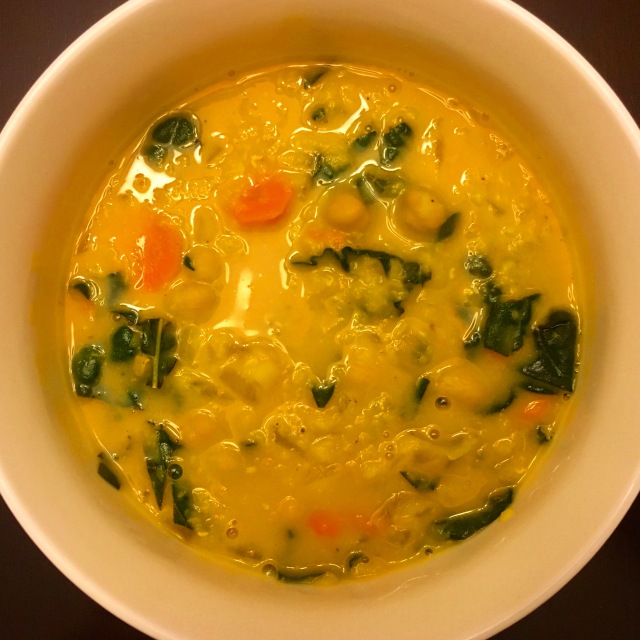 This slow cooker red lentil stew is one of the best things I’ve made this year, or maybe ever.

It all started when I went to Small Business Saturday with my friend Anna. We had lunch at Union Loafers, a popular spot in St. Louis. I ordered a bowl of their kale garbanzo bean soup and I was blown away. The texture, spices, and color made me forget that it was raining. It improved my mood and increased my willingness to be anywhere besides my apartment.

I was going to try to recreate the soup exactly as it was, but then I realized that I wanted to add some red lentils. I also decided to put in onion, garlic, fresh ginger and turmeric, and pepper. I threw everything into my slow cooker at lunchtime on Sunday and went about my day, which involved lying on my coach watching back-to-back episodes of “The Crown.”

At around three hours into the cook time, I started smelling the soup from the other room. I wanted to open the lid and eat some, but I forced myself to hold back. A few minutes before the five hour mark, when you’re supposed to stop cooking the soup, I added chopped kale, garbanzo beans, coconut milk, and some salt. I would highly recommend tasting the soup at this stage to see if it needs more salt.

I poured myself a bowl and took it into the other room with some cut up Union Loafers baguette. I dipped my spoon in and took a sip. My first thought was, I can’t believe how good this is. My second thought is, I’m never using ground spices in soup again.

The latter might be hard to achieve, but in the case of this soup, I would recommend springing for the good stuff. Freshly grated ginger and turmeric takes your soup from tasting like box variety to restaurant quality. I also love the color it turned the soup. It was bright, vibrant, and warming, exactly what I needed after a carb-loaded Thanksgiving weekend.

When you drink this soup, it basically feels like someone waves a magic wand over your body and takes away all the stress and pain. I know that sounds dramatic, but it’s true. It has anti-inflammatories including turmeric and ginger, so it calms your insides down. It also warms you up, so if you’re like me and get cold in a 70 degree house, it comes in handy.

I heated up the leftovers for lunch today and the soup was still good on day two. It might have even been better, because the flavors had a chance to set.

Here’s a song to get you started on your slow cooker red lentil stew journey.