A Weekend in the Windy City

When I got back from France, I wasn’t sure what I wanted to do with my life.  I’m sure I’m not the only 20-something year old with this dilemma, but nevertheless, it hasn’t been an easy year.  After applying to more grad schools than I could count on both fingers, and applying for jobs in various cities across the country, I think I’ve finally decided on my next step: Northwestern University’s Medill School of Journalism in Evanston, Illinois.

Northwestern has always been on my radar.  I visited the campus before my senior year of high school, and as a Midwesterner, I frequently visit Chicago.  The last time I was there, I was getting my visa in order to move to France.  It’s funny how life seems to come full circle.

This past weekend, I decided to visit the school for Medill’s “Admit Days.”  I stayed at The Homestead Inn in Evanston for the first two nights, a quaint little Bed and Breakfast a few blocks away from Northwestern’s Main Campus.  The exterior looks like an old-fashioned house, and the interior matches perfectly; there were lots of antique light fixtures and classic decor.  When I came down for breakfast both mornings, there were guests sitting and chatting in French.  It was fun for me to listen to a language that I hadn’t heard spoken in awhile.  I could see why they had chosen to stay at the Homestead, because it felt alot like a European hotel.

Even though it was cold and rainy for the majority of my visit, I walked around campus, and took pictures of the beach and Lake Michigan…It’s so beautiful, even when it’s cloudy.

For lunch on Thursday, Medill treated all the admitted students to Giordano’s Famous Deep-Dish Chicago Style Pizza.  For those of you who haven’t tried Deep Dish pizza before, I have to say…You’re missing out.  Most St. Louisians have a strong allegiance to thin-crust (cracker style) pizza, and New Yorkers passionately defend their gigantic, foldable slices.  But I like how Deep Dish pizza places the sauce on top, and how the gooey cheese melts into the soft, moist pie-crust.  Perhaps to appease non-Chicagoans, the restaurant also served slices of regular-crust pizza…But they paled in comparison to the Deep Dish.

Friday morning, I had to wake up early and take the El (Chicago’s above-ground public transportation) into the city for meeting at Medill’s newsroom.  After a few speeches and lectures, Admit Days came to close, and I met up with one of my friends who lives in Chicago’s South Loop.  She loves to eat almost as much as I do, so we always have food-related adventures whenever I’m in town visiting.

We began our journey at the Bongo Room in Chicago’s South Loop. My friend introduced me to the restaurant the last time I was in Chicago, and after one look at the menu, I was hooked. The Bongo Room serves unique breakfast, brunch and lunch fare, which includes everything from “Pumpkin Spice and Chocolate Chunk Flapjacks” to a “Breakfast Burrito” filled with guacamole and scrambled eggs.

We decided to split two dishes: Citrus French Toast with baked apples and a vanilla bean cream sauce, and then an Pesto Omelette with avocado, red and yellow peppers, and goat cheese.

The French Toast was, in a word, decadent.  The top was sprinkled with brown sugar crumble, the bread was light and airy, and the juicy, cinnamon apples were perfect when dipped in the rich vanilla cream sauce.  I have to admit, it was hard to focus on my half of the omelette with the French toast right beside it…But I love pesto, and I had never tried avocado in an omelette before.  Now, it’s one of my favorite fillings…especially when paired with the soft goat’s cheese. 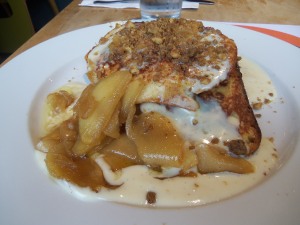 We ate more than two reasonable people should…But then again, who needs to be reasonable?

After lunch, we took a long, much-needed walk to Chicago Cultural Center.  I had never been to the Center before, but my friend goes all the time.  They have free exhibits, and the day we visited, there were rooms filled with unique modern art.  One exhibit had collages made entirely out of children’s play things, all broken up and pasted back together.  We took some pictures, until the docent discovered us and told us to stop.

My favorite part of the Center, though, was the top floor.  It’s one giant room, and when you look up, you see a beautiful stained glass dome.

I also took pictures of the surrounding interior.

I think the Center must have been a library at one point, because I spied this quote carved into the wall:

After the Center, we continued our “food crawl” of Chicago at Ghiradelli’s.  Most of you have probably sampled (or at least, heard of) Ghiradelli’s chocolate.  The company manufactures premium chocolate, and unlike other companies, they control the entire manufacturing process; they select the cocoa beans, roast and refine them to ensure a rich, full-flavored chocolate.

In Chicago, the chocolate store is also home to a Soda Fountain and Ice Cream Shop.  The first time I tried Ghiradelli’s Ice Cream, I was ten years old and visiting Chicago for the first time.  Now, I try to visit the store every time I’m in the city. On Friday, it was cold and windy, so after walking the mile to get to the store, I decided to warm up with hot chocolate.  My friend got a Mocha, which was equally chocolatey, rich, and delicious.

That night, my friend and I had dinner with my cousin, who has lived in Chicago for the past four years.  She also shares my passion for food, and works for a company that owns many restaurants in downtown Chicago.  One of them is Bar Toma, an Italian neighborhood Pizzeria that is right next door to Ghiradelli’s.

I expected dinner to be good; after all, Bar Toma was named one of Chicago’s best new restaurants in 2011, and they are famous for making their own gelato.  What I didn’t expect was to be treated to one of the best eating experiences of my life.

We started the meal with two crostini, one of which was goat cheese with treviso marmalade.  What is treviso?, you may ask.  I wondered the same thing.  It wasn’t until I got home and googled the question that I discovered that treviso is actually radicchio, a leafy vegetable of Italian origin.  I had never tried vegetable marmalade, but the tart, acidic flavor of the radicchio was subtle when mixed the the syrup and sugar.  Before I discovered what treviso was, I guessed that we were eating some type of dried cherry marmalade…Which really isn’t too far-off taste-wise.

We followed the crostini with a Cristina salad, which included many of my favorite ingredients: hearts of palms, oranges, avocado, and olives.  I didn’t eat too much, though, because I was saving room for the main attraction: The two wood-fired pizzas.  We ordered  simple Margherita pizza, which was topped with fresh Mozzarella, tomato, and basil.  But then, we also ordered a more unique pizza, the “Sardinian,” which included cauliflower, capers, tomato, and one of my favorite types of cheese: Pecorino (from sheep’s milk).  If this is the type of pizza they eat in Sardinia, sign me up for the next visit. 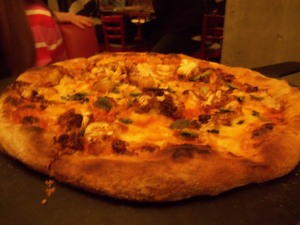 As if the pizza, salad, and crostini weren’t enough, we decided to finish the meal with dessert.  The restaurant offers a sampler of gelato, and even though we were all ready to burst, we ordered four small dishes.  We chose Pistachio, Espresso, Stracciatella (sort of like American chocolate chip ice cream), and Riso, a flavor modeled after Italian rice pudding. The Riso was cinnamony and fresh on the palette, the espresso was rich, and the Pistachio was by far the sweetest flavor.  My cousin felt bad for the Stracciatella, which we neglected in favor of the other three scoops. 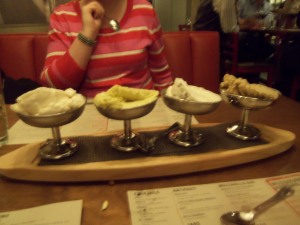 As you can imagine, by Saturday I was stuffed.  Although the “real” purpose of my visit to Chicago was to visit Northwestern/Medill, I decided to capitalize on the fact that I was in a city with a rich, vibrant food culture.  With every block, I spotted new restaurants that I wanted to try, or bakeries that I hope to frequent.  I might be signing up for a Master’s program, but I also am beginning a new chapter of my food education.  And something tells me that it’s going to be delicious…