I’ve been hearing about Union Loafers’ pizza since I moved back to St. Louis. So last Friday night, I decided to check it out.

I got there early because Union Loafers doesn’t take reservations. When I arrived at 5:15 (they open at 5:30), there was already a line around the corner. To my surprise, it was mostly young families. I expected there to be more people my age, but I guess at that hour on a Friday night, it’s mostly an older crowd and babies. One kid hid from his parents under a chalkboard sign outside the restaurant.

When it opened, I grabbed a seat at the bar and ordered a beer. “It’s really good,” the waitress said when she brought me the wile ale, and she was right. It’s tart and refreshing, exactly what I needed on a Friday night. I sipped on it as I watched the restaurant fill up.

I ordered an Italian salad to start and I’d highly recommend it. Normally when I think of Italian salad, I picture wilted lettuce leaves doused in oil and vinegar and weighed down with Parmesan cheese. These are the salads of pizza delivery dinners of my youth. 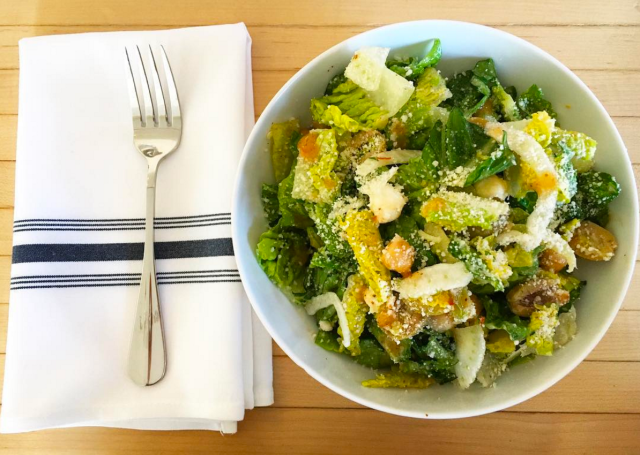 This salad was packed with ingredients but it was still light. It had garbanzo beans, olives, pickled peppers, and fior di latte, or little spheres of mozzarella-like cheese. “Holy shit,” I thought after my first bite. “This is delicious.”

When the waiter brought the pizza, my eyes popped out of my head. I was expecting it to be smaller, the kind that’s served to you on a small pizza tray. It wasn’t. It was huge, 18 inches wide.

“I always take some home in a to-go box,” the waitress said to me. I guess I looked intimidated. “Don’t be surprised if I eat it all,” I said.

I probably could have eaten the whole thing by myself if I hadn’t eaten the salad, first. Lesson learned: Never eat salad. But in all seriousness, the pizza is the main event at Union Loafers. It’s crispy on the bottom but the crusts are dense and chewy. The sauce to cheese ratio is on point. I like that the slices are big enough to fold, New York-style. It reminds me of the first time I ate pizza in New York. I stood at a counter and my friend, a native New Yorker, showed me how to fold the slice in half. I’d never seen people eat pizza standing up.

The best part about this pizza is how good it tastes the next day. I judge pizza on this quality. There are shitty slices of day-old pizza that you settle for because they exist, and then there are slices of pizza like those at Union Loafers that get better over time. I ate two slices cold on Saturday afternoon and I could have eaten a third.

ANYWAY. If you’re in St. Louis and you’re looking for delicious pizza, go to Union Loafers. Get a beer and order a salad. Don’t be alarmed when you’re presented with an 18-inch pie. Rest assured that if you take home two slices (or five), they’ll be even more delicious on day two.

Here’s a song that reminds me of this pizza.