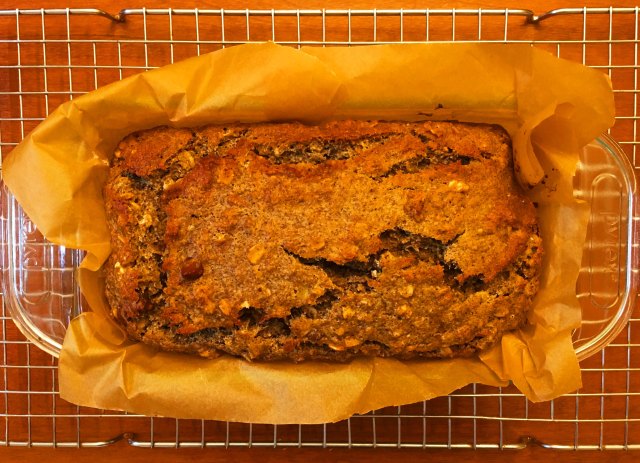 I’ve been craving banana bread for a couple weeks but I keep making cookies and cake. Then I saw three overripe bananas in my fruit bowl yesterday. “It’s fate,” I thought.

I’m constantly on the hunt for the best banana bread recipe. I’ve tried a bunch and some are really good, but they still leave something to be desired. The best banana bread is three things: Moist (why is that word so awful?), dense, and sweet from chocolate chips. There’s nothing worse than cakey banana bread, the kind that feels like you could pour a glass of tea over it and it would still be slightly dry.

Last night, I made up a recipe that I hoped would solve the dry banana bread problem. I subbed in almond flour and buckwheat flour for most of the all-purpose flour and I added gluten-free oats.

The buckwheat and oats make the bread. Buckwheat gives the bread a dense crumb and a caramel color. The oats keep the bread moist. Together they make a loaf that tastes like it just came out of the oven, even if you leave it on the counter overnight.

I added chocolate chips to the batter because I love the combination of chocolate and banana. If you’re not a chocolate fan, you could add some walnuts. I bet those would also be delicious.

The other thing to note about this recipe is the sugar. The bread calls for maple syrup, regular sugar, and brown sugar. I used dark brown sugar instead of light brown sugar because I thought it would give the bread more flavor. I was right. I also added two tablespoons of maple syrup instead of three because I didn’t want the bread to be too sweet. If you want to increase the sweetness factor, you should add another tablespoon of syrup.

I was going to wait to have a slice until this morning but I couldn’t stop myself last night. I sliced off a piece from the end and ate it warm while the chocolate chips were still melted. It was heavenly. Then I had a slice this morning with a green smoothie. I pretended the smoothie was medicine and used the banana bread as my reward for ingesting greens.

ANYWAY. Make this bread as soon as possible. It will probably impress your office, too. I brought some in and a coworker stopped by my office and said it was one of the best things I’ve ever made. It was a high compliment.

Here’s a song to get you started on your banana bread-making journey. When I lived in France a while ago, a friend of mine gave me an introduction to Serge Gainsbourg. I’ll never forget this song.

Preheat the oven to 350 degrees. Line a 9×5 loaf dish with parchment paper and set aside.

Pour the batter into the prepared baking dish and smooth out the top with a spatula or the back of a spoon. Bake for about an hour and ten minutes, or until the top is golden brown and cracked and a toothpick inserted in the center comes out clean. Allow to cool for a while in the pan before removing* and cooling the rest of the way on a rack.

The loaf will keep at room temperature for a couple days, tightly wrapped. Enjoy!

*If you leave some parchment paper hanging over the edges when you line the pan, it will make it easier to remove the loaf once it’s cool.