A Weekend of Local Eats

For as long as I can remember, every April in St. Louis has been mild; warm at best.  Today, for the first time in 23 years, the thermometer moved past 90 degrees.

For some, the spike in temperature provokes retreat: “retreat” as in, moving indoors, blasting the air-conditioning, and generally trying to ignore the fact that Spring is most definitely here…And summer isn’t far behind.

I was born into a St. Louis summer, so I think I was primed to enjoy the sweltering, humid weather.  I would rather be sitting outside, sweating and slightly dehydrated, than staying inside and feeling like I’m trapped in a refrigerator.

So it’s no surprise that I spent most of today and yesterday outdoors…And I have the bright red sun-burn to prove it.

Saturday afternoon I decided to try a new coffee-house café for lunch: Kaldi’s.  If you’re from St. Louis, you’ll recognize Kaldi’s for their coffee- they are the coffee vendor/supplier for many local restaurants and cafés.  However, Kaldi’s also boasts a number of bakery/café/coffeehouse locations throughout the St. Louis region.  I had already tried two closer to my house, but this weekend, I wanted to visit their original location.

The coffeehouse is on a street corner in the DeMun neighborhood, catycorner to an elementary school and next door to a fancier restaurant.  Children wander over and sit down at tables outside the restaurant, and adults sit on benches with coffee mugs, perusing local magazines.

When you actually go inside, there’s mostly natural lighting, and there are a mix of patrons; some are students bent over a group project, and others look like they just rolled out of bed, walked downstairs, and ordered a scone.  The atmosphere is decidedly laid-back, and for a second, I felt as if I had walked into someone’s kitchen.  The music was subtle, people were calm and relaxed, and when I moved outside, neighborhood residents casually strolled by, enjoying the nice day.

Unlike its other locations, the original Kaldi’s menu is completely vegetarian…But don’t equate “vegetarian” with wimpy food.  I ordered the Roasted Veggie Burrito, and it was practically bigger than my face.  Wrapped inside a spinach tortilla was a hearty helping of rice, roasted eggplants, zucchini, fresh artichokes, basil pesto, and salty feta cheese.  Even though I could have eaten the burrito without any garnishes or additions, the plate includes a mound of hummus and pico de gallo. 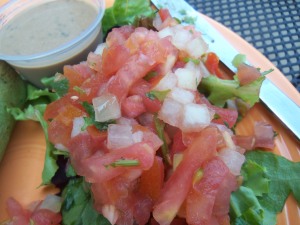 I also ordered a chocolate chip cookie…But that didn’t make it to the picture-taking stage.  So you as you can imagine, it comes highly recommended…

After lunch, I walked across the street to the park, which neighbors a local college.  There were beautiful purple flowers lying in patches around the benches, and I loved the way the white blossoms looked on the trees. 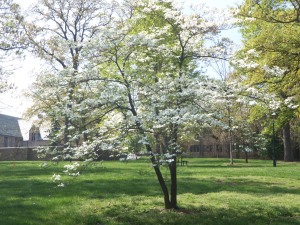 Today, I decided to revisit an old favorite for lunch: The Daily Bread.  I originally tried the café/bakery back in October, when I was writing a food review for a local magazine’s blog.  This time, I ordered the same salad: the “Autumn Crunch.” Autumn Crunch? you may ask yourself.  Why would a Salad with that name be on a Spring menu? I’m not sure I can answer that question, but what I can say is, the name is deceiving.  Yes, the salad contains juicy Gala apples, a Fall food staple; but it also has plump, Golden Raisins, juicy strawberries, and grape tomatoes.  I especially liked the tangy-ness of the Gorgonzola, as it perfectly complimented the sweetness of the raisins and berries. 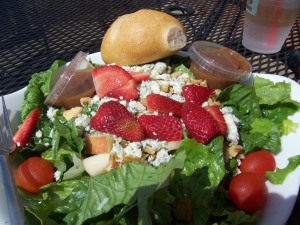 The salad is served with a fresh, sourdough roll, as all the bread is baked in-house.  Next time, I want to try one of their hearth-baked pizzas (there’s a real hearth-oven in the back of the kitchen), or their “Panino Romano” with fresh goat cheese, roasted red peppers, and portabello mushrooms.

I spent the next few hours after lunch sitting at a park closer to my home, reading and getting my trade-mark pre-Summer sunburn.  I have to admit, with all the heat, I did need some reprieve…

So I stopped by Lancia Frozen Yogurt in Chesterfield.  I love Lancia, because in the midst of the “Fro-Yo” craze, they remain entirely locally-owned and operated.  When you go to Lancia’s, you don’t feel like you’re walking into a chain, or commercialized fro-yo “experience”.  Everything is fresh and home-made, and with flavors ranging from Texas Peanut Butter to Cherries Jubilee, you’ll have alot to choose from.

Today, I mixed White Cake Batter with Caramel, and added some fresh strawberries on top.

I couldn’t think of a better way to end the day, or a weekend spent outdoors.

2 Responses to A Weekend of Local Eats