PuraVegan: A Venture into Raw Food 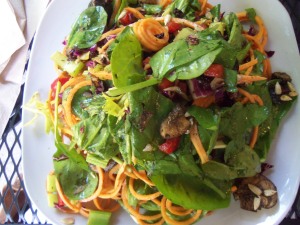 Two years ago before I left for France, I needed a three-month summer job.  I had just graduated from college, and didn’t want to work in an office all summer.  So, my options were pretty much limited to retail and the food industry.  I, of course, chose food.

I worked at the local Cheesecake Factory, where I was responsible for plating desserts, carrying-out to-go orders, and manning the bakery’s cash register.  One of the first people I met (and the person who trained me in the bakery) was Leann.

During my first week on the job, I learned that cheesecake was the restaurant equivalent of water; it was everywhere, and everyone ate it.  Everyone, that is, except Leann.  Leann didn’t eat cheesecake, or even cheese…She was a vegan.

I only discovered veganism (?) during my junior year of college, and had never really met anyone who committed to this lifestyle.  While I could never be a vegan, I give people who are vegan alot of credit…It’s so hard to find viable food options, especially in a city where everything seems to be doused in cheese (or, as you perhaps saw from my last post, custard).

Since returning to St. Louis, Leann and I have met up a few times, and usually try new vegetarian/vegan venues.  This past Friday night, we tried “PuraVegan,” a restaurant near downtown St. Louis that specializes in 100%, raw vegan food.

I know, “raw” food doesn’t exactly paint the most appetizing image.  Perhaps some of you are picturing carrots with dirt on them, or turnips that still have their scraggly white roots.  Or maybe you’re just wondering what raw food even is.

As it turns out, raw food means food that is not cooked, processed, or heated.  Everything is served, well, raw, and some foods are dehydrated to create unique textures and flavors. For more information, click here.

I was somewhat hesitant to try raw food, simply because I like my food to be cooked…I can do without cheese or butter, but I usually sautée whatever I’m making in olive or vegetable oil.

However, I was pleasantly surprised by PuraVegan’s raw food.  Leann ordered the Enchiladas, which consisted of sunflower “beans,” avocados, pico de gallo, nacho “cheese,” and cabbage all rolled into corn tortillas. 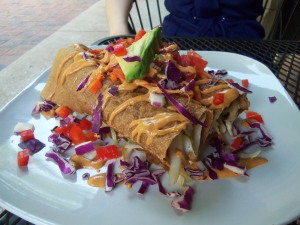 Interestingly, my favorite part about this dish was the fake cheese…It tasted so real! And I was impressed that the dish managed to recreate the same flavors found in other Mexican food, without all the oil and fat.  There might have been a tad too much cabbage, but the other ingredients were fresh and well-proportioned.

As you can see, there’s alot going on in this dish.  I liked the mix of ingredients, although I was expecting (perhaps naively) that the sweet potato “pasta” would be pasta, and I didn’t really like the addition of the celery…It seemed a little out of place among the other ingredients.

I did, however, like the blend of spices and herbs, and I liked that when I finished eating, I didn’t feel stuffed, lethargic, or bloated…I just felt healthy.  And on a ninety-degree St. Louis summer night, I needed a lighter meal.

I’m not sure if I’m going to make raw food a regular part of my diet, but was happy that I at least gave it a try.  And next time I’m in the neighborhood, I might stop in and try the Pine Nut Ricotta Pizza…if PuraVegan can made noodles out of sweet potatoes, I have to see what they do to pizza crust. 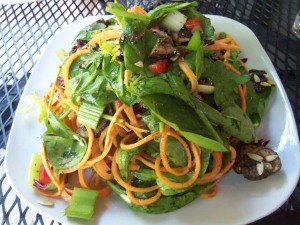