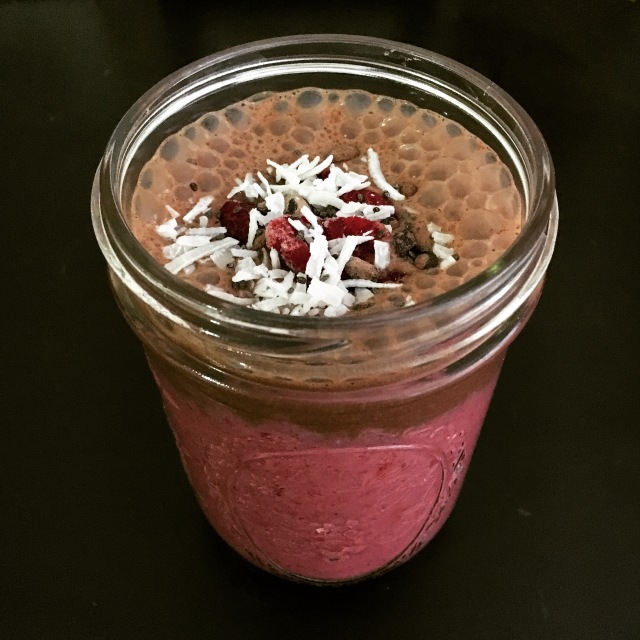 There’s something to be said for drinks in a jar. Every time I sip something out of a Mason jar, I get a cheap thrill. Maybe it’s millennial brainwashing, I don’t know. But whatever it is, it’s working.

I made this recipe this morning when I was working from home, and it was enough for two shakes. Great: I have one for now, and one for tomorrow morning when I actually have to go into the office. There’s something to be said to waking up to a good breakfast. It’s motivation to get out of bed, at the very least.

Feel free to top the shake as you please. I added some frozen raspberries, chia seeds, shredded coconut and cacao nibs.

Here’s the song I listened to to drown out the noise of the blender (there’s a lot of blending in this recipe).

Garnish the tops of the shakes with cacao nibs, shredded coconut, chia seeds, bashed up frozen raspberries, or anything else you like. Enjoy immediately.

Hi! My name is Emily and I'm a writer based in St. Louis. If I was stranded on an island and could request three items of food, they would be pain au chocolat, enchiladas, and Neapolitan pizza.
View all posts by Emily Wasserman →
This entry was posted in Breakfast, Chocolate, Drinks, Uncategorized, Vegan and tagged breakfast, Chocolate, chocolate raspberry shake, chocolate shake, healthy, healthy breakfast, healthy eating, raspberry, smoothie, Vegan. Bookmark the permalink.