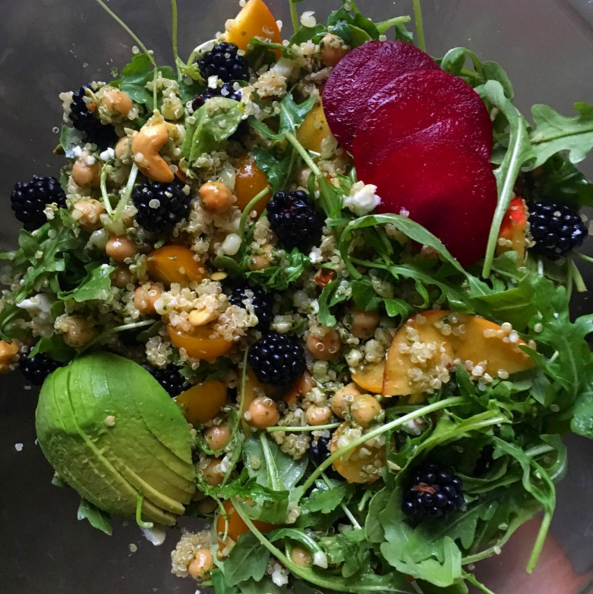 This salad came about because I saw a recipe for a “summer abundance salad” on one of my favorite food blogs. Then, the saleswoman at the farmers’ market talked me into buying two cartons of blackberries (“it’s the end of blackberry season!”) and there were some good looking nectarines yesterday. The peaches didn’t look as good, though, so I ended up using plums.

I think my biggest problem with salads is that sometimes they can be boring, but this one isn’t. You can dig out all the good stuff, i.e. everything that sits on top of the arugula, and somehow there are still plenty of basil chickpeas, toasted almonds and blackberries to be had.

Also, let’s talk about the dressing…whoa. That’s all I can say. I had my doubts about adding fig butter, but trust me, it’s so worth it. The fig flavor in the dressing complements the stone fruit, berries and feta. It’s a win-win situation.

I downloaded a bunch of music in one sitting last night while I was half-awake. Here’s a song I’ve been jamming out to this morning.

Preheat the oven to 350 degrees F. Roast the corn kernels until slightly charred. At the end of the roasting time, add a sheet pan to the oven with the seeds and nuts and roast them until they’re slightly brown.

In a medium bowl, stir together the chickpeas and pesto. Let sit at least 15 minutes minutes to marinate.Prepare your grains as directed on the package.

To make the vinaigrette, combine all the ingredients in a mason jar and shake until smooth. Add more salt and pepper to taste.

In a large salad bowl, toss together the quinoa, cherries, berries, nectarine, corn, tomatoes and feta. Stir in the pesto marinated chickpeas and toss the salad with about half the vinaigrette.

To serve, top the salad with sliced avocado, toasted nuts and seeds and fresh greens. Serve with the remaining vinaigrette. Enjoy!

Hi! My name is Emily and I'm a writer based in St. Louis. If I was stranded on an island and could request three items of food, they would be pain au chocolat, enchiladas, and Neapolitan pizza.
View all posts by Emily Wasserman →
This entry was posted in Dinner, Gluten-Free, Lunch, Uncategorized and tagged arugula, avocado, basil pesto chickpeas, blackberries, chickpeas, fig butter, nectarines, pesto, plum, quinoa, salad, stone fruit, summer salad, vegetarian. Bookmark the permalink.