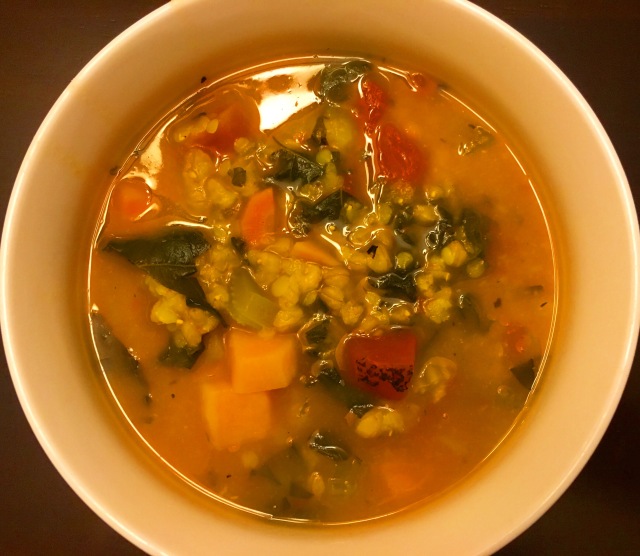 I know that for most people, college food equals gross, but luckily I don’t have that experience. The university I work for during the day has excellent food including soup. The other day I had some sweet potato four grain soup on campus for lunch and it was one of the most delicious things I’ve eaten recently. I decided to try to recreate it at home.

This soup isn’t an exact recreation because it’s missing a spicy element, i.e., sriracha sauce or harissa. But it comes pretty close to what I tasted last week. It’s warming, healthy, and delicious, and has a bunch of reassuring things in it including thyme, squash, kale, and whole grains. It’s basically a win-win as far as soup and dinner goes.

I put farro and red lentils in the soup, but you could always swap out the red lentils for a different kind of lentil (yellow or green) if you prefer. My favorite thing about this soup is the number of things it has in it. I was worried that they wouldn’t all fit in the slow cooker but they did. I tried to get farro, lentils, squash, and vegetables in every bite while I was eating it.

This is a great soup to make during the winter and fall when it’s cold and you don’t feel like cooking. You can throw all the ingredients into the slow cooker in the morning and by the time you come home from work or whatever else you’re doing, you have gourmet-level soup that will impress yourself and your friends. I ate some with my boyfriend last night and he told me multiple times how much he liked it.

I’d recommend serving the soup with some good, crusty bread. I toasted a few slices of the rustic loaf from KNEAD and it was the perfect accompaniment. It was hearty enough to stand up to the hot soup and farro and lentils, and also had its own flavor and texture.

I know everyone is concentrating on their Thanksgiving menu right now, but keep this soup bookmarked for after the holiday. I’m sure I’ll be making it again soon.

Here’s a song to get you started on your slow-cooker soup journey.

Place all the ingredients in a slow cooker or crockpot. Cook on low for six to eight hours. Mine took about seven hours. Taste, season, and serve with good bread. Enjoy!