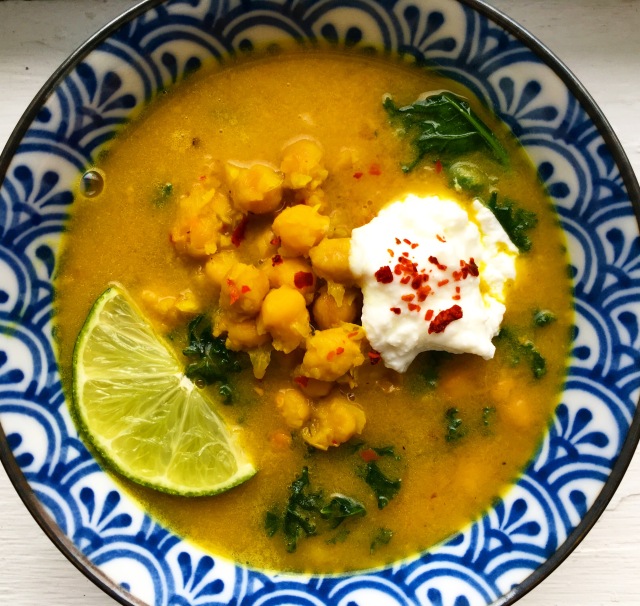 Around this time of year, I start searching for healthy, warming, spicy soups. I’ve compiled quite the list over the years and I’m still adding to it. This weekend, I added Alison Roman’s spiced chickpea stew recipe and now it’s going to be on permanent rotation.

I’m a big fan of Alison Roman and her recipes. Like most food aficionados, I discovered her about a year ago when her recipe for salted chocolate shortbread cookies was EVERYWHERE. I’m talking every page on social media, multiple times a day. I eventually caved and made her cookie recipe. It was one of the best things I baked in 2018.

Flash forward to this weekend, when I came off a stressful week at work and spent part of Friday night lying in the fetal position on my couch. I was browsing recipes and saw Alison Roman’s recipe for spiced chickpea stew with coconut and turmeric. It looked so warming and reassuring. I impulsively bought all the ingredients and decided to make it on Monday when I didn’t have to go to work.

Alison is all about cooking to your preferences in the recipe. She advises you to cook the stew longer if you want it thicker (“Determining perfect stew thickness is a personal journey!”) and to cook your greens in the soup depending on how delicate they are. I followed her directions but I also tasted the soup the whole way through. I’d advise you to do the same. You can add more spices if you want, or adjust the salt and pepper to taste. Soup, like so many things in life, is fairly subjective.

A key part of this recipe is cooking the chickpeas. The recipe tells you to fry them to begin with, and then remove about a cup for topping the soup later. I did this but you don’t have to, especially if you’re serving the soup later or freezing it. If you skip this step, just mash all the chickpeas with a spoon instead of removing some.

I deviated from the recipe a little because I added a sprinkle of Aleppo chile flakes at the beginning and end of cooking. I also added the juice of half a lime to the finished stew, which I’d recommend doing. It adds some tang to the soup and pairs well with the spicy flavors and sweet coconut milk. A dollop of Greek yogurt at the end balances the spicy ingredients.

The recipe also calls for mint leaves for topping but if you don’t have them on hand, you can always sub in cilantro. Or you can leave the herbs out altogether, as I did when I found a wilted bunch of cilantro in my fridge on Monday afternoon.

ANYWAY. Make this soup as soon as possible. It will cure what ails you in every possible way, and it freezes beautifully so you can have quick, delicious meals throughout the week.

Here’s a song to get you started on your spicy chickpea stew journey. I started listening to the new Maggie Rogers album today and I’m obsessed.