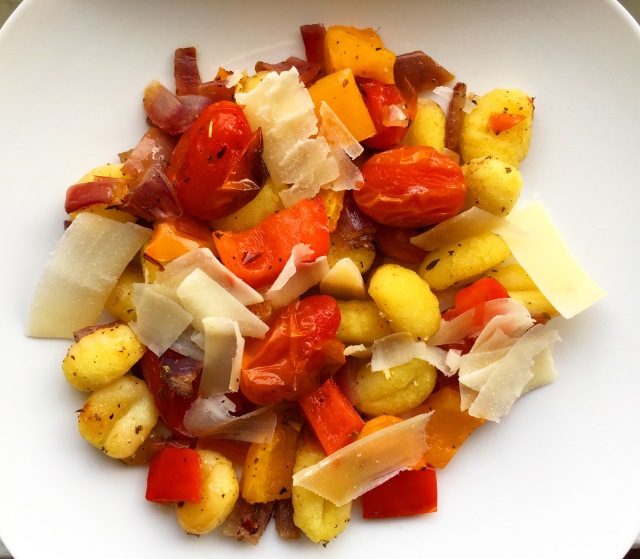 I don’t know about you, but some of my favorite meals are ones that come together in one pot or pan. Cue: This sheet pan gnocchi.

I found the recipe a while ago but I kept putting off making it, not because I didn’t want to but because there were a lot of other dishes (mostly baking-related) on my radar. Yesterday night, I stopped procrastinating and finally got down to business.

This sheet pan gnocchi is one of the easiest and most delicious things you can make on a weeknight. It literally comes together on one pan, so setup and cleanup is minimal, and it bakes quickly so you have a meal in less than 30 minutes.

Some of you might be weirded out by baking gnocchi. I’ll admit that I was put off by it, mostly because I’ve only seen gnocchi boiled or fried. I wondered how they would turn out in the oven with no prior cooking.

The answer is, they were little potato clouds of joy. They were soft on the inside but crispy on the outside, and they absorbed all the herbs and spices I put on top. They mixed well with the soft, juicy bell peppers and caramelized red onion. I have leftovers sitting in the fridge right  now and writing this description is making me hungry.

If you’re not a fan of gnocchi but you like all the other elements in this dish, you could always throw the veggies and herbs on a sheet pan, bake them according to the recipe’s directions, and then toss them with some freshly-cooked pasta. Or you could get creative and double the recipe and serve extra veggies over quinoa or farro.

Here’s a song to get you started on your sheet pan gnocchi journey.