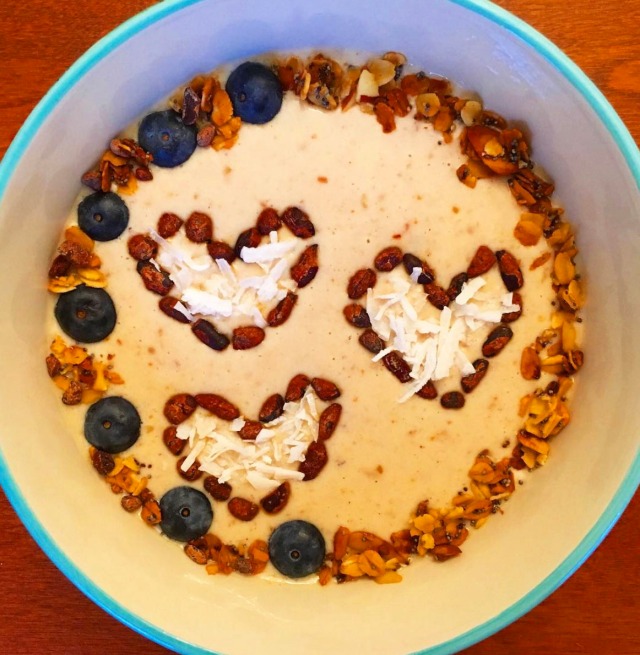 I wanted to get back on my smoothie bowl game so I made this date, tahini, banana smoothie last week.

I decided to fill in the hearts with coconut because coconut pairs well with dates, tahini, and cacao nibs. I used some leftover homemade granola to form a ring around the outside of the bowl and I garnished one side with blueberries. I like the way the finished product looks. The cacao nib hearts kind of remind me of a needlepoint design.

I was having a conversation the other day about smoothie bowls and someone commented that it must take a long time. Yeah, it does take a while, especially if you have a complicated design. But to me it’s worth it. I used to make one every morning, which seems crazy in retrospect.

Now I save them for mornings where I have a little more time to spare. It’s relaxing. I’d compare it to knitting or another craft, because once you start you get completely in the zone and forget about everything else.

In other news, it’s almost the weekend and I’m pretty excited about it. I don’t have any real plans beyond eating some delicious food and making a cake (I haven’t decided between the chocolate or the pistachio cardamom version, yet). If it’s nice on Sunday I might go for a hike…here’s to hoping. The weather here has been unpredictable lately.

Here’s a song to play while you’re making this smoothie bowl. It’s also good for times when you’re stuck in rush-hour traffic and you need a distraction.

Blend the dates, banana, tahini, almond milk, yogurt, and cinnamon together in a blender on high until smooth. Pour into a bowl and top with cacao nibs, shredded coconut, granola, and blueberries. Enjoy!