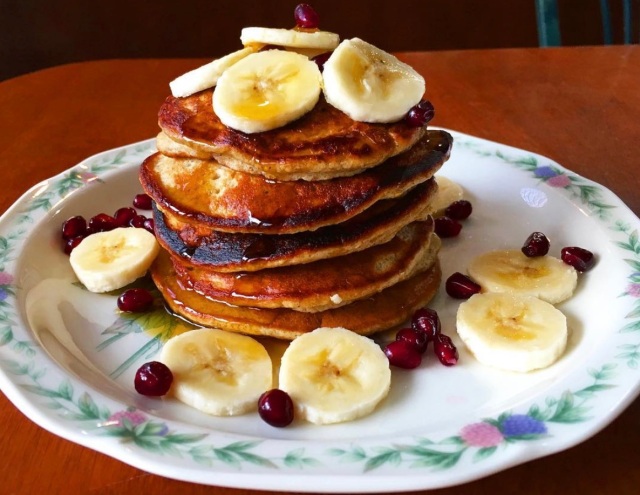 I’m not a fan of calling things what they’re not. For example, a gluten-free, no sugar, vegan brownie is not a brownie. It could be very good. It might even be amazing. But it’s not a brownie.

So when I saw a recipe for these pancakes the other day, I was skeptical. The recipe called for no flour, an egg  and an egg white, rolled oats, and no sugar. I don’t know about you, but to me that’s a scary prospect. All the pancakes I’ve loved over the years have been full of flour and sugar.

Well, these pancakes exceeded my expectations because not only were they delicious, they were maybe the best pancakes I’ve ever made. Yes, they’re not technically pancakes, but for lack of a better word, that’s what I’ll calling them.

I’m going to make these pancakes every weekend, or at least a couple weekends every month. They’re light, fluffy, flavorful, and delicious, and combine a bunch of my favorite things. They include banana, chai spices, and a dash of orange blossom water.

You could leave the orange blossom water out if you don’t have it, but I’d highly recommend getting some. Orange blossom water is used in a lot of Middle Eastern desserts and it’s citrus-y, bright, and fragrant. It pairs well with spices such as cardamom and cinnamon, both of which are in these pancakes.

I topped the pancakes with some banana slices, pomegranate arils, and a generous pour of maple syrup. I halved the recipe but after tasting one pancake, I wished I hadn’t. I could have eaten two stacks by myself.

Here’s a song that reminds me of these pancakes. I heard it in the car on the way to work this morning and it took me back to three and a half years ago, when I heard it for the first time in D.C. It’s good when you need a little extra motivation on Monday morning.

Blend the eggs and the egg whites, banana, oats, vanilla extra, orange blossom water, baking powder, spices, and salt in a large blender on high until smooth. This should take about 30 seconds to a minute.

Heat a nonstick skillet over medium heat. Pour 1/4 cup batter at a time into the hot skillet. Wait until bubbles appear on one side of the pancake and then flip it over and cook the side for about a minute more, or until golden brown. Continue this process until you use up all the batter.