Brunch at Brasserie and French Macarons 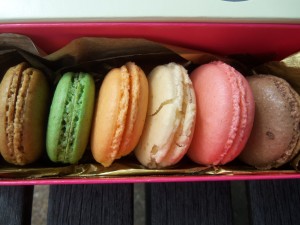 I didn’t intend for this past weekend to be French-themed.  I had planned to walk around the park with a friend, and to visit Tower Grove Farmer’s market (again) on Saturday morning.  But I guess, the things we love have a way of finding us…Or, perhaps on a subconscious level, we’re always seeking them out.

I follow a local blog called “The Sweet Art,” written by a graduate student at Washington University in St. Louis who bakes and writes on the side.  I like her blog because it focuses on sweets (thus the name), but gives special attention to one of my favorite French creations: Macarons.  For those of you who have never tried a Macaron (or think they’re in the same family as an American macaroon):

1.) Macarons aren’t Macaroons…They don’t have coconut, and are instead made with almond flour and egg whites.

2.) Macarons are delicate cookies, and are made by piping dough onto baking sheets.  They can be filled with jams, jellies, chocolate, or, one of my personal favorites, Nutella.

I was addicted to Macarons in France, and would frequently stop at a bakery on my way home from teaching to treat myself to one of these delicious cookies.  I would debate about which flavor to get, and sometimes ask the baker for their input.  It wasn’t exactly Sophie’s Choice, but nevertheless, it was a hard decision.

Nowadays, I can find the cookies in some specialty stores or bakeries in St. Louis.  But when I read on The Sweet Art’s blog that she not only made the cookies, but was going to sell them at Tower Grove Farmer’s Market, I knew I had to buy some.  They’re such a rarity in the U.S., and these Macarons also had the allure of being homemade. 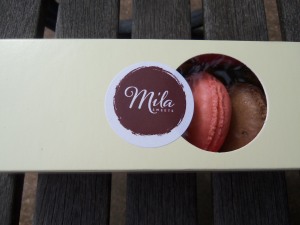 Box of Macarons from “The Sweet Art”

I splurged on a box of six, and wasn’t disappointed.  I tried the pink cookie first, thinking it was Strawberry (one of my favorites), but it turned out to be Grapefruit, with a hint of white chocolate grapefruit ganache in the center.  Just like Proust with his Madeleines, one bite of the cookie brought back a flood of memories.  I was sitting on a park bench on a sweltering St. Louis morning, but I could have been in the Parc Pasteur in Orléans, just steps away from the Loire River.

On Sunday, I decided to visit one of my favorite St. Louis restaurants for Brunch. Brasserie by Niche is probably one of the most authentic French restaurants in St. Louis.  The front of the restaurant has glass doors that open up in the spring and summer for patio seating; just like a French brasserie.  The chairs remind me of the ones you see in Parisian cafés, and the menu offers many traditional French dishes.  For Brunch, you can order anything from beignets to Eggs en Cocotte or Quiche.

I ordered two dishes…Truth, I was writing a food review for a local magazine.  But also, I was just really hungry.

The Brioche French toast was nothing short of perfection.  The slices were crispy and flaky on the outside, and soft, warm and moist on the inside.  The bread was slightly cinnamon-y, and there wasn’t an overwhelming egg taste (the downfall of many a French toast).  The toast was topped with a generous dollop of tart, citrusy lemon curd, which was so rich and creamy I almost couldn’t finish it all.  The whole dish was sprinkled with powdered sugar, and served with a little cup of Maple Syrup…which, in my opinion, was more of a decoration than a necessity.

After consuming more sugar than the average person should, I decided to try a more savory dish: The Quiche du Jour (i.e. Quiche of the Day).  Even though I don’t really eat much meat (and never eat pork), I decided to break with tradition and go a little crazy.  This quiche had diced, roasted chicken, bacon, roasted potatoes, Gruyere cheese, and spinach.  I didn’t think that one Quiche would be able to fit all those ingredients…but it did.  And it was delicious.  The Gruyere was slightly salted and melted, and the eggs were baked to perfection: not too runny, but still fluffy and moist.  The crust was flaky and buttery, but wasn’t too heavy or overpowering.

And like any good French quiche, this one was served with a side salad.  The greens were leafy and fresh, and topped with a honey-shallot vinaigrette and crunchy hazelnuts.  Interestingly, the hazelnuts complimented the flavor of the quiche; what started as a garnish became part of the main attraction, as I ate a bite with hazelnuts and eggs.

It’s good to know that although France is thousands of miles away, and it’s too far and expensive to visit, I can find some delicious reminders close to home.  As I sat at my small table on the patio of Brasserie by Niche, savoring my French toast and watching passerbys, I felt as if I were sitting at a Parisian sidewalk café.  And the best part? I didn’t even need to buy a plane ticket. 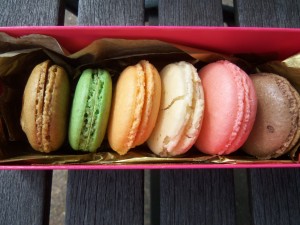 2 Responses to Brunch at Brasserie and French Macarons